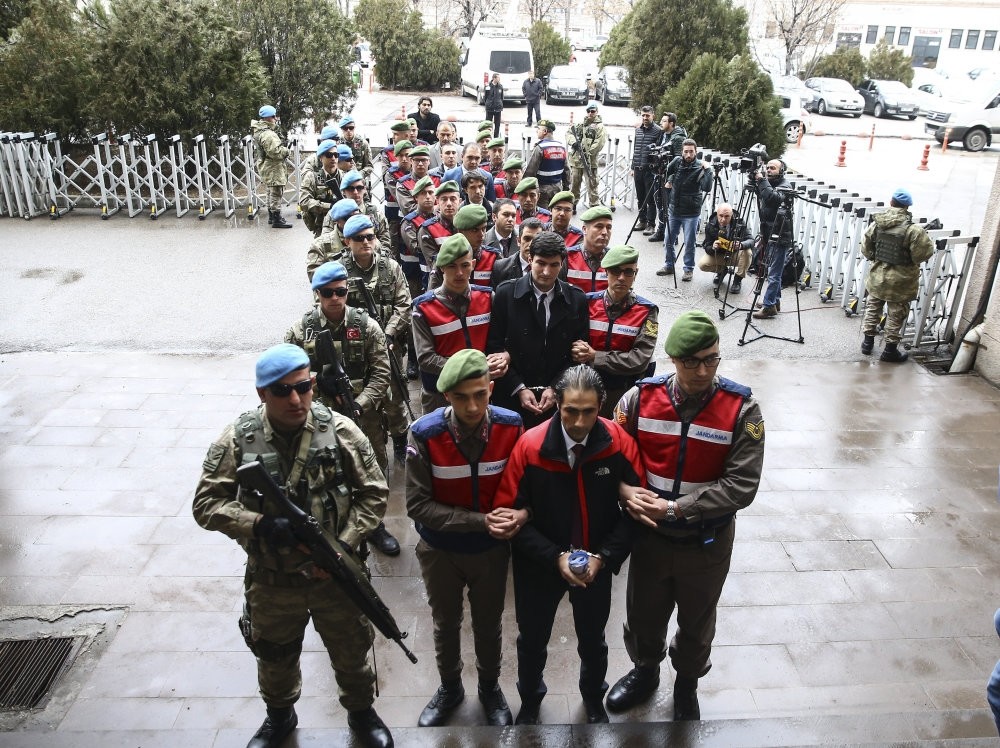 Gendarmes escort 18 defendants accused of involvement in the coup attempt and killing anti-coup hero u00d6mer Halisdemir in a previous hearing at a court in Ankara, in February 2017.
by Daily Sabah Mar 20, 2018 12:00 am

Twenty-one soldiers were detained yesterday in Turkey's fight against FETÖ, while prosecutors asked for multiple life sentences for a group of putschists linked to the group for killing an anti-coup hero in Ankara

In the latest operations against the Gülenist Terror Group (FETÖ), security forces detained 21 military officers in 16 cities yesterday. Elsewhere, prosecutors asked for 18 defendants to be sentenced to life for their roles in the 2016 coup bid by FETÖ's infiltrators in the military. The defendants were accused of attempting to take over the headquarters of the army's elite Special Forces in the capital Ankara and murdering Ömer Halisdemir, an officer who confronted them and shot dead the leader of the putschists during the takeover.

The coup attempt on July 15, 2016 killed 249 and was quelled thanks to a strong public resistance. Thousands of people were arrested or detained for their roles in the coup attempt that was plotted by FETÖ's point man controlling the infiltrators in the Turkish Armed Forces (TSK), according to prosecutors.

Last week, the chief prosecutor's office in Muğla, a southwestern city where President Recep Tayyip Erdoğan was vacationing during the insurrection attempt, issued arrest warrants for 36 soldiers who managed to hide their ties to FETÖ long after the deadly attempt. Fifteen officers were arrested last week, and the rest were nabbed in yesterday's operations held in cities spanning from Istanbul to Diyarbakır in the southeast and to Artvin in the northeast. Suspects manage to dodge detection in the post-coup purge against FETÖ and are accused of staying in contact with their civilian handlers in the terrorist group via payphones.

The terrorist group is known for its use of an encrypted messaging app allegedly developed by an engineer member called ByLock to relay messages to its infiltrators in the army, judiciary, law enforcement, etc. When authorities stepped up operations against the group and managed to uncover a large part of FETÖ's hidden network all across Turkey, its secret members turned to safe houses for hiding and payphones for communications.

Meanwhile, a prosecutor in Ankara asked the court for aggravated life sentences for 18 defendants in a trial yesterday. The trial, being closely watched by the public, focuses on the coup's attempt to capture the headquarters of Special Forces, an elite unit of the army, and the killing of Halisdemir, probably the most renowned figure in the resistance against the coup. Halisdemir, a sergeant and aide to Special Forces Cmdr. Zekai Aksakallı, has been hailed for his martyrdom while trying to stop the coup. When ordered by Aksakallı - who was elsewhere in the capital at the time of the coup attempt - by phone to take out Semih Terzi, the putschist general who attempted to assume the command at Special Forces headquarters, Halisdemir simply muttered "yes, sir" and hid among the bushes outside the headquarters, waiting for Terzi. When Terzi, accompanied by a phalanx of elite soldiers arrived, Halisdemir jumped in front of him and fired a fatal shot only to be killed in a barrage of gunfire by pro-coup troops walking with Terzi. Fatih Şahin and Mihrali Atmaca are the two officers responsible for Halisdemir's death, the prosecutor says, adding that the court should hand down additional life sentences to both for the murder. Şahin fired first on Halisdemir and fired a total of 11 times, the prosecutor said. After he was dragged from the spot where he was hiding, Halisdemir was still alive. The prosecutor said Mihrali Atmaca, after discovering that Halisdemir was still alive though unconscious, fired two more shots. The hearing was adjourned to April 9 to give time the defense time after prosecutor's plea for their sentencing.

Coup trials, started in December 2016, continue all across Turkey. Hundreds of officers, including those who attempted to kill Erdoğan, were sentenced to life imprisonment in some concluded trials. Larger trials, including the one where more than 400 people are being tried for taking over the military's main headquarters, are expected to be wrapped up later this year.

Led by U.S.-based former preacher Fetullah Gülen, FETÖ emerged as a sinister group bent on toppling the government in 2013. Its two coup attempts - through FETÖ infiltrators in judiciary and law enforcement - failed and Ankara stepped up its vigilance against the group that long posed as an innocuous movement running a network of schools and companies. As authorities were about to uncover a network of its infiltrators and planning to weed them out from the army in August 2016, FETÖ members in the military moved to seize power, according to accounts of former members who detailed how soldiers and civilian FETÖ members held meetings days before the coup on how to execute it.