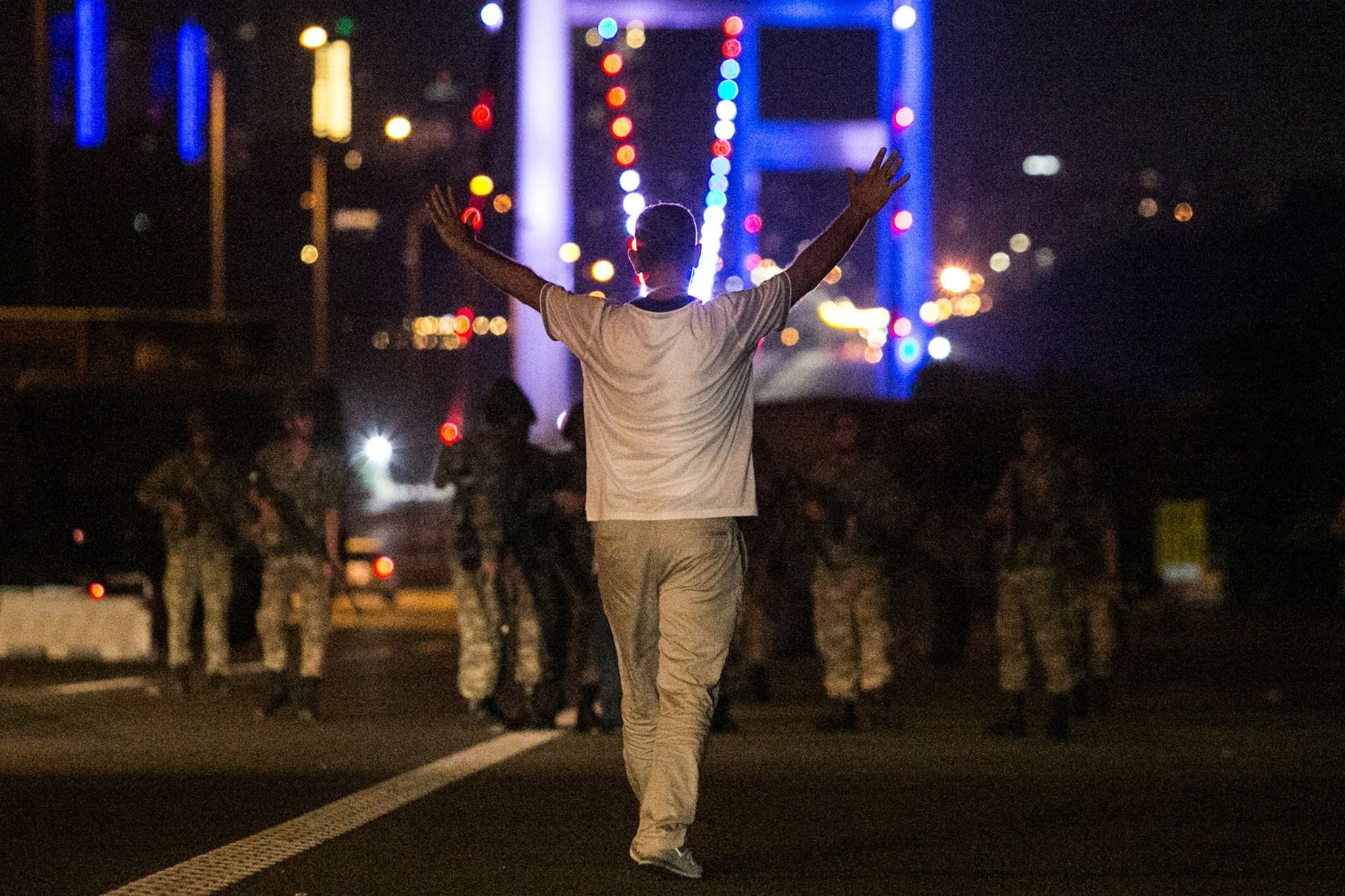 A man approaches putschist troops on the Bosporus Bridge during the coup attempt. The bridge was one of the places where the putschists who were sentenced to life in Istanbul on Friday deployed troop and armored vehicles.
by Daily Sabah Mar 24, 2018 12:00 am

Courts in Istanbul and southern Turkey sentenced 18 people to aggravated life imprisonment for their roles in the 2016 coup attempt while nationwide operations on Friday saw arrests of terror suspects, from soldiers to the staff of a company linked to the Gülenist Terror Group (FETÖ), the culprit of the putsch bid.

At least 123 suspects were arrested in early morning operations against the group whose infiltrators in the military killed 249 people during the July 15, 2016 coup attempt. One of the operations targeted the group's infiltrators in the army, both active and former soldiers, and 12 suspects were arrested. In another operation, 38 FETÖ suspects, all affiliated with a now-defunct labor union run by FETÖ members, were arrested. Police in the capital Ankara, meanwhile, arrested 24 suspects linked to the terrorist group's secret network within the Turkish police. Ten others were arrested in the same case. Another operation targeted the staff of Işık, publisher of books penned by Fetullah Gülen, the fugitive leader of the terrorist group. Twenty-five suspects were arrested in that operation. Dozens of others were arrested in operations against users of ByLock, an encrypted messaging app exclusively used by FETÖ and for staff of FETÖ-linked companies. Since the coup attempt was quelled, security forces launch almost daily operations to capture members of the terrorist group. The groups' senior cadres fled abroad after the coup was foiled, but investigations show FETÖ still maintains a secret network within Turkey and uses safe houses to hide its members staying in the country.

In Istanbul, 10 defendants, all former soldiers, were sentenced to aggravated life sentences. The defendants were deployed at an armored brigade command in Istanbul's Maltepe district at the time of the coup attempt. They were accused of taking over the brigade command headquarters on July 15, 2016 and dispatching troops and tanks to several locations in Istanbul during the failed coup bid, from bridges to an airport on city's Asian side.

In the southern city of Mersin, the trials of 32 defendants involved in the putsch bid were concluded with heavy sentences. Adm. Nejat Atilla Demirhan, who was the commander of Naval Forces' Mediterranean operations department, and seven others were sentenced to aggravated life imprisonment for an attempt to overthrow the constitutional order. The court was yet to issue the verdicts on the other defendants when Daily Sabah went to print.

Demirhan was accused of leading the coup attempt in Mersin, a Mediterranean port city. The admiral was in close touch with a general and an admiral jailed on coup charges and ordered a lockdown of the base in which he was deployed on July 15, 2016. He also ordered his subordinates to "shoot police officers approaching the base." The police played a key role in subduing putschists all across Turkey. Prosecutors say Demirhan declared himself "martial law commander" in the city and instructed the police to "comply with his orders." Hasan Basri Dağdelen, a police chief tried in the same case, complied and went to the base where Demirhan took over. The admiral is also accused of ordering navy vessels to shoot a Coast Guard boat carrying anti-coup soldiers. When some of his subordinates refused to follow his orders and the police surrounded the base, Demirhan had to surrender.

Elsewhere, hundreds were on trial for participating in the coup attempt. According to prosecutors, Gülen ordered his point men controlling infiltrators in the military to seize power as the crackdown escalated against his followers. Coup trials, which first started in December 2016, saw life sentences for dozens of putschist officers and more trials are expected to be concluded later this year.

In one such trial on Friday, a police officer injured while fighting the putschists, gave an account of the brutal coup attempt. Remzi Baş was at the main police headquarters in the capital Ankara on July 15, 2016. He testified at the trial of 155 defendants, suspected putschists who were deployed at a helicopter unit of the army. Baş and others were trying to fend off the putschists who attempted to take over police headquarters. "I heard a putschist shouting to his subordinates, 'I don't want to see any policemen alive here.' Then, helicopters fired upon us. I took five shots when they fired on us," he said.

Ömer Lütfi Peker, who was among the anti-coup crowd gathered outside army headquarters in Ankara, testified that the helicopters also fired on them and his son was wounded by the fire.

In another hearing, Chief of General Staff Hulusi Akar and Yaşar Güler, who was Land Forces commander at the time of the coup attempt, testified for the first time before the court trying 221 putschists who invaded the army headquarters in Ankara. The two men, who were among top military brass abducted by putschists on July 15, 2016, have already presented their written testimonies to the court. Akar said he had nothing to add to his previous testimony where he gave a detailed account of how he was forced by putschists at gunpoint to board a helicopter to travel to a military base occupied by putschists. "I want them to be punished," Akar told the court. "I worked to end this bloody coup attempt as soon as I became aware of it," he said. The general also spoke about FETÖ members in his entourage, including an aide who was among his hostage-takers. "It was impossible to determine whether military personnel were linked to FETÖ due to the secrecy it maintains," he said. Güler told the court that he was held hostage by a group of soldiers from the elite Special Forces command at the time of the coup bid. "I was in my room around 9:25 p.m. when some 10 soldiers armed to the teeth stormed in. They pointed their guns and told me to lie down. I resisted, but they put me on the ground. One of them put his foot on my head and another handcuffed me. They taped my mouth and then put a blindfold on my eyes. I remember Mehmet Akkurt [an aide] mockingly telling me, 'Don't worry, sir, it is only a drill,'" he added.

Güler, like Akar, was then taken to Akıncı, an airbase the putschists used as a command center. "They put me in a room there. After a while, Akın Öztürk entered and asked me what I was doing there before removing the blindfold," he recounted. Öztürk, a former Air Force commander, is accused of leading the Peace At Home Council of putschists and was captured in Akıncı on July 16, 2016. "Öztürk told me he was trying to convince [the putschists]," Güler said. The general said Öztürk also begged to accompany him out of the base when he was finally freed after the putschists started fleeing the base.