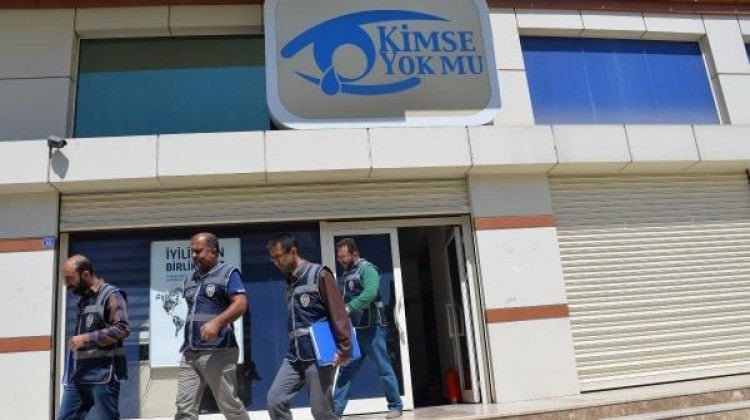 The executives of the now defunct charity u201cKimse yok mu?u201d are accused of channeling collected donations to FETu00d6-linked projects.
by Daily Sabah Apr 02, 2018 12:00 am

The executives of a charity linked to the Gülenist Terror Group (FETÖ) channeled funds collected for the group and falsified documents, according to an indictment prepared by the Ankara Prosecutors' Office. The charity, "Kimse Yok mu?" (Is there no one out there?), was shut down by a government decree after the July 15, 2016 coup attempt by FETÖ. The indictment lists all the donated goods, including shoes, clothes and diapers, that were sold on the market and had proceeds channeled to FETÖ.

The executives later prepared false documents to give the impression that they were given to the needy.

One former employee, Haluk A. from Diyarbakır, told authorities that he was fired for his opposition to the widespread corruption in the charity. The police questioned the recipients listed on receipts, none of which had received anything from the charity. Haluk A. said a donation marathon held to purchase a house for a family had generated TL 39,000, of which only TL 1,000 went to the family in question.

The charity, founded in 2002, grew into an international organization with offices in 41 provinces in Turkey and one each in Sudan and Pakistan.

The indictment against the 56 executives of the charity, said money donated for sacrificial animals for the poor was expropriated by FETÖ. In 2011, Agricultural Ministry records notes that the charity purchased 1.8 million sacrificial animals, but the money was instead channeled into various projects of the group.

The Financial Crimes Research Council (MASAK) investigations showed that a considerable portion of the money collected was used by executives for non-charitable activities. Most of the money was sent abroad, especially Africa, to build schools and dormitories or their renovation. Additionally, the charity sent money to Mali, Sudan, Ethiopia and Bangladesh through non-banking means.

The head of FETÖ, Fetullah Gülen, started as an imam in the 1960s, becoming the head of a religious-political behemoth by the 2000s. Separated into financial, education, media and business operations and organized around individual cells, FETÖ members infiltrated state institutions, especially the judiciary, police and the military for decades.

The 1970s and 1980s were spent consolidating the group, creating the necessary education and financial structure while slowly placing members in state institutions. Its schools and prep schools served as the main recruiting tool for the group, which assigned particular degrees and vocations to its members. The group at first tried to gain public legitimacy by exploiting people's religious sentiment. At its peak, FETÖ operated schools in 160 countries from Afghanistan to the United States. Since the 2016, Turkey has been conducting a successful campaign to shut down FETÖ-linked school around the world.

Hundreds of judges and prosecutors, supported by thousands of police, which included old and new recruits, and people coerced into cooperation, initiated a criminal investigation that avalanched into a huge trial with hundreds of suspects. These included the Ergenekon and Balyoz (Sledgehammer) cases against secularist critics and the Tahşiye case against religious conservatives se

en as threats. In the Ergenekon and Balyoz cases, suspects were released in 2014 after it was revealed that the trial was based on false evidence and fabricated charges and were a plot to imprison critics of FETÖ.

The dissolution of the group began in 2014, after its attempt to topple the government through a series of bogus corruption trials in December 2013. The government responded with a comprehensive offensive to rid the state of the FETÖ presence and suspended thousands of known FETÖ suspects from the judiciary and police. FETÖ-linked businesses, educational institutions and nongovernmental organizations were also targeted.

The failed coup attempt on July 15, 2016 that claimed 249 lives was FETÖ's final attempt to take over the state. Gülen currently resides in an expansive compound in Pennsylvania, U.S. Repeated Turkish requests for his extradition to Turkey to face charges have been rebuffed by American officials.