FETÖ fugitives in US wanted for Russian envoy's murder 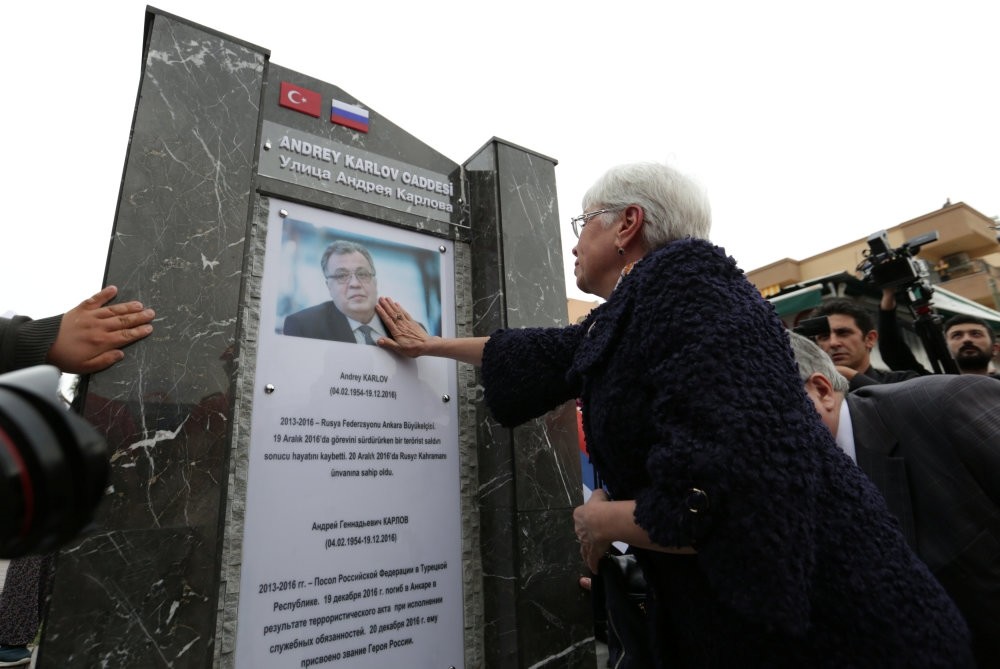 Marina Karlova, the widow of Andrey Karlov, touches the late ambassador's photo on a memorial unveiled in Antalya, March 22.
by Daily Sabah Apr 03, 2018 12:00 am

A court issued arrest warrants for eight people, including FETÖ leader Fetullah Gülen and two senior figures of the terrorist group, for the assassination of Russian Ambassador Andrey Karlov who was murdered two years ago by a FETÖ-linked police officer

An investigation into the murder of Andrey Karlov, Russia's ambassador to Ankara, two years ago reached the upper echelons of the Gülenist Terror Group (FETÖ). A court in the Turkish capital issued arrest warrants for Fetullah Gülen, the terrorist group's U.S.-based leader, and seven others for their role in the assassination.

Karlov was shot dead by Mevlüt Mert Altıntaş, an off-duty policeman, while speaking at the opening of an exhibition in an Ankara art gallery on Dec. 19, 2016. Altıntaş, who was killed in a shootout with police after the murder, was linked to FETÖ, which is accused of executing a foiled coup bid on June 15, 2016 among other crimes.

The court implicated Gülen, who has lived in the United States since 1999, Emre Uslu, a renowned figure of the terrorist group who fled to the United States before the coup attempt and Şerif Ali Tekalan, another senior FETÖ member who now presides over a university in the United States, in the Karlov case. Apart from standard terrorism charges, suspects are accused of homicide and will likely be sentenced to life imprisonment if found guilty.

Media outlets reported that the investigation that is being closely watched by Moscow traced Altıntaş's connections to FETÖ's "imams." Imam is a term defining terrorist group's handlers responsible for its infiltrators in law enforcement, judiciary, the military etc. Şerif Ali Tekalan, who fled to the United States while running a FETÖ-linked university in Istanbul, was found to have ties with Mustafa Timur, one of the organizers of the exhibition Karlov was attending at the time of his murder.

Tekalan is already implicated in a string of cases related to the terrorist group. Anadolu Agency reported that investigators found e-mail exchanges between Timur and Tekalan. Emre Uslu, who is known for his notorious pro-FETÖ propaganda posts online, is accused of diverting attention from FETÖ's involvement in the case.

Murat Tokay, another suspect in the case, was the "handler" of Altıntaş for FETÖ, according to the investigation. Cemal Karaata and Cengiz Özkan are accused of gathering intelligence on the Russian ambassador and supplying the intelligence to Gülen. The whereabouts of the suspects Uslu and Tekalan are unknown. Prosecutors told the court that multiple pieces of evidence, from digital material in Altıntaş's possession to testimonies of suspects linked to FETÖ, pointed to his membership to the terrorist group and the murder was "committed to serve the interests of FETÖ."

Authorities have already arrested nine suspects in connection with the murder, including three of Altıntaş's colleagues.

The assassination was at a time of thawing in strained Turkish and Russian relations and an investigation found that Altıntaş was linked to FETÖ, which tried to portray the murder as the work of an extremist group.

Since the murder, Ankara and Moscow have gradually made progress in rebuilding ties that were derailed by the 2015 downing of a Russian fighter jet over the Syrian border by the Turkish military. Prosecutors say Altıntaş personally knew Fetullah Gülen.

The Russian delegation found that two files with the words "Fetullah Gülen" present, 690 files with "Hizmet," a term that means "service" which FETÖ calls itself, four files with the words "FETÖ," and one file with "Nur Community" were deleted from Altıntaş's computer. Fetullah Gülen is implicated in a string of cases from illegal wiretapping to money laundering apart from three coup attempts in 2013 and 2016. Turkey is seeking his extradition from the U.S. along with other senior FETÖ figures but so far has not yielded any results. The United States, where the terrorist group runs a network of charter schools, is among the favorite safe havens for fugitive FETÖ members. Gülen himself lives in a posh retreat in Pennsylvania, in the company of senior figures of the terrorist group wanted by Turkey.