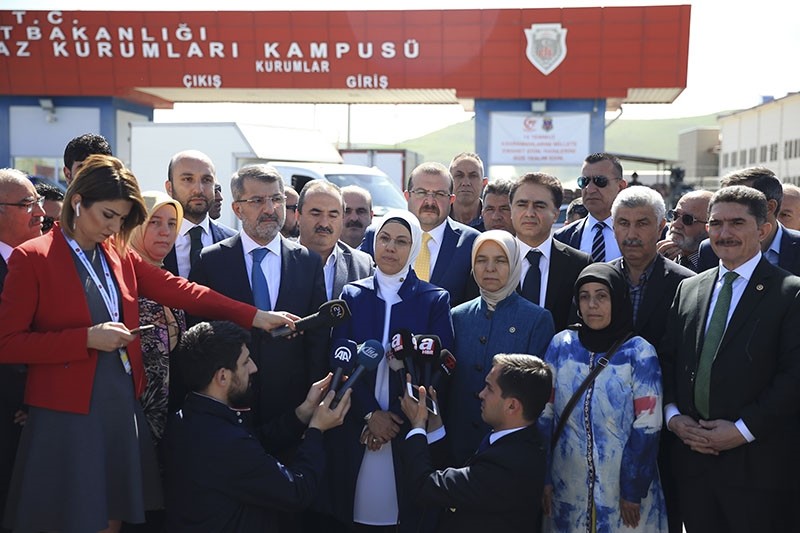 The trial of 18 putschist soldiers concluded yesterday in Ankara with life sentences for all defendants for killing Ömer Halisdemir, a sergeant-turned-hero for killing a senior leader of pro-coup troops during the 2016 coup bid by military infiltrators of terrorist group FETÖ

One of the major trials on the July 15, 2016 coup attempt by military infiltrators of the Gülenist Terror Group (FETÖ) ended Thursday with life sentences for 18 defendants. All were putschist troops accused of murdering Ömer Halisdemir, a sergeant posthumously recognized as a national hero for single-handedly killing Gen. Semih Terzi, one of the leaders of the coup attempt that killed 250 people.

Halisdemir, an aide to Lt. Gen. Zekai Aksakallı, then a major general and former commander of the elite Special Forces of the Turkish military, managed to shoot Terzi dead as the latter arrived - in the company of a military unit - at the Special Forces headquarters in the capital Ankara during the insurrection attempt.

Aksakallı was outside and had dodged an attempt to abduct him by putschists. Finding out about the coup attempt and suspects involved, Aksakallı telephoned Halisdemir and told him to take out Gen. Semih Terzi, a putschist commander who flew in from southeastern Turkey to take over command at Special Forces for the coup plotters.

"He simply said 'yes, sir'" Aksakallı would later recount the last words Halisdemir said to him in their phone call.

Showing up at the entrance of the headquarters armed only with a pistol, Halisdemir fired shots that would kill Terzi. Pro-coup troops accompanying Terzi immediately responded with a barrage of gunshots and Halisdemir died on the spot.

Their plan to capture Special Forces, a key unit of the military, was thrown into disarray. The putschists were frustrated and ultimately turned themselves in as other anti-coup officers closed in on them.

Eighteen defendants in the Ankara trial were those accompanying Terzi who intended to capture the headquarters on behalf of the Peace At Home Council of the putschists.

The 14th High Criminal Court in the capital Ankara found the defendants guilty both of deliberate manslaughter as well as for attempting to destroy the constitutional order. Thirteen defendants were spared from aggravated life imprisonment in the trial that had begun in February 2017.

Halisdemir is probably the most well-known face of the military's resistance against the putschists.The 42-year-old soldier's name is given to schools, parks and other public places and became one of the most popular names for boys born after the coup attempt. His modest grave in Niğde, his hometown in central Turkey, has been visited by thousands from all across the country since 2016.

"The court did what it would do. Our state and nation always appropriately responds to traitors and recognize heroes," Soner Halisdemir, the brother of the late soldier, told reporters outside the courthouse after the verdict was announced. "Ömer did his duty for his millions of brothers and sisters. As his family, we are grateful to the nation. This is not the case of our family but a case of the state and nation," he said.

Ravza Kavakçı Kan, a lawmaker from the ruling Justice and Development Party (AK Party) who serves as the party's deputy chair for human rights, was among those watching the trial. Speaking to reporters after the hearing ended, she said the verdict was "significant" for Turkish justice. "Ömer Halisdemir is a martyr, a hero. He prevented the takeover of the Special Forces command and greatly contributed to the failure of the coup. Today's verdict shows us that justice prevails and putschists account for what they did," she stated.

After the putsch bid in 2016 was foiled, FETÖ faced a heightened crackdown and more than 77,000 people were arrested for links to the group. The trials of soldiers involved in the attempt and nonmilitary members of FETÖ started in December 2016. FETÖ is known for its widespread infiltration into the judiciary, law enforcement, military and bureaucracy. Through its followers in the judiciary, it is accused of orchestrating sham trials to imprison its critics or anyone it deemed an obstacle to its interests. After expanding its clout, it sought to topple the government, first in 2013.

National Defense Minister Nurettin Canikli announced on Wednesday that they uncovered a secret network of about 3,000 FETÖ members in the Turkish Armed Forces (TSK) and they would be dismissed from duty in the coming days. "The fight against FETÖ will continue for longer," Canikli said, citing the secretive nature of the group. Dozens of "crypto" members, as Canikli called them, in the military were uncovered in earlier investigations thanks to testimonies of Gülenists who invoked a remorse law enabling them to receive lenient sentences and gave names of fellow members.

Investigators, meanwhile, sift through millions of messages exchanged between the group's members on ByLock, an encrypted messaging app exclusively used by FETÖ members to detect the suspects, from military and police officers to civilians. Thursday, eight former staff of the country's top administrative court Danıştay were arrested in Ankara for using ByLock and financing the terrorist group.

In another trial in Ankara, 47 defendants were handed down life imprisonment and aggravated life imprisonment sentences Thursday while 217 others were sentenced to lesser prison terms. Sixty-four others in the trial, mostly conscripts forced to join the attempt by their putschist superiors, were acquitted. All defendants were soldiers at the 58th Artillery Brigade and a military school for artillery officers in Ankara's Polatlı district at the time of the coup attempt. The defendants sentenced to life include the school's commander, Gen. Osman Ünlü, and the brigade's commander, Brigadier General Murat Aygün. Like Terzi, Aygün was one of the members of the Peace At Home Council of generals and lower-ranking officers who carried out the coup attempt. He and other defendants were accused of taking over the military complex where the brigade and military school is located and dispatching troops to set up roadblocks across the capital in a bid to assist other putschists who tried to seize the capital. On July 15, 2016, pro-coup troops in Ankara carried out airstrikes targeting the Presidential Complex, the headquarters of an elite police unit and Parliament, as well as opening fire on unarmed civilians.

More trials are expected to wrap up later this year, while the main trial of 221 defendants accused of taking over the office of the Chief of General Staff is still underway.