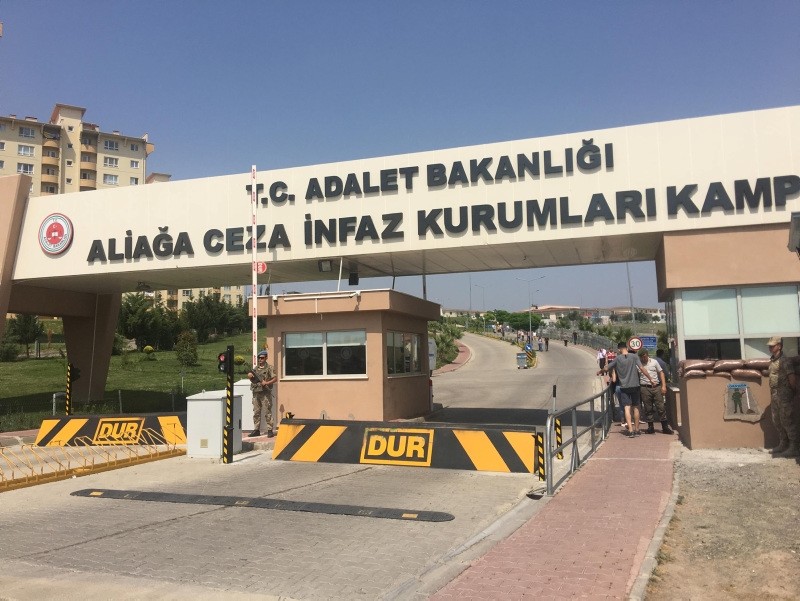 Courts in the western city of Izmir and the southern city of Gaziantep handed down aggravated life sentences to 106 defendants on Monday in trials over the 2016 coup attempt carried out by the Gülenist Terror Group (FETÖ). The defendants, all military officers, are accused of taking part in the attempt that killed 250 people in Turkey. Investigations revealed that FETÖ used infiltrators in the military to seize power on July 15, 2016.

In Izmir, 104 out of 280 defendants received aggravated life sentences in the main trial of those involved in the attempt in the city. Izmir, Turkey's third largest city on the Aegean coast is home to several key military bases, including Çiğli, the air base where a team of putschists assigned to kill President Recep Tayyip Erdoğan gathered. Erdoğan was in vacation in Muğla, a city south of Izmir when the putschists stormed his hotel, but the president had left the premises before they arrived.

Those sentenced to aggravated life sentences in the İzmir trial included Gen. Memduh Hakbilen, chief of staff of the Aegean Army of Turkish Armed Forces, admirals Hasan Hüseyin Demirarslan, Yaşar Çamur and Süleyman Manka and Gen. Mehmet Nuri Başol. Demirarslan and a colonel were also each sentenced to 20 years in prison for aiding the assassination attempt targeting President Erdoğan. Another 31 defendants were sentenced to 10 years and six months in prison for membership in the terrorist group FETÖ. Ten others, including a general, were released due to lack of evidence. Verdicts will be announced at a later date for the remaining defendants.

All the defendants were expelled from the army after the coup attempt was crushed thanks to strong public resistance encouraged by President Erdoğan. The court did not spare prison sentences for two defendants in the case who helped authorities track down FETÖ's traces in the coup attempt. Brigadier Admiral Halil İbrahim Yıldız and Col. Hakan Bıyık were sentenced to 16 years and eight months in prison after they confessed their ties to FETÖ in exchange for a lenient prison sentence. Some defendants tried to assault Yıldız and Bıyık after the verdicts were announced. The two men served as "secret witnesses" in several coup attempt trials before disclosing their identities.

Hakan Bıyık revealed the role of a senior FETÖ member in the coup attempt when he revealed how Adil Öksüz, a theology lecturer who was actually a point man for the terrorist group, plotted the coup attempt. Now a fugitive believed to be abroad, Öksüz met military officers of the putschists' Peace At Home Council in a villa in the capital Ankara days before the coup attempt. Öksüz and others planned how to capture strategic locations and topple the government. Bıyık was among those attending the meetings and gave names of other FETÖ-linked military officers to authorities.

Halil İbrahim Yıldız has also attended Öksüz' meetings with officers prior to the coup attempt. He was among the first defendants in the coup cases to confess the role of Gülenists in the attempt. Most defendants, even those openly tied to the terrorist group, reject their links to FETÖ despite evidence to the contrary. The former admiral said he first came into contact with FETÖ in the early 1990s and grew attached to them as he attended meetings where he and others discussed the teachings of Fetullah Gülen. He said he never questioned why everyone in the group used code names and only realized much later that it was for covering their tracks in the illegal activities of the group. He told the court that FETÖ members gave him questions and answers to a military school exam earlier in his career.

Izmir was one of the critical locations, serving as "a base for logistics" for coup plotters, according to prosecutors who say that putschists coordinated travel of military units to other cities from military bases in the city. The city, where FETÖ leader Fetullah Gülen made a name himself as an outspoken preacher in 1970s, also hosts another trial where several FETÖ figures are tried for conspiring to expel officers from the army not loyal to the group. FETÖ, by using prosecutors, police officers, judiciary officials and other people loyal to the group, is accused of orchestrating sham trials and plots to implicate officers in a made-up espionage scheme. Following the coup attempt, prosecutors filed charges against 801 defendants for links to the group and role in the attempt. A 1,300-page indictment against the defendants implicates Fetullah Gülen as "prime suspect" in the coup attempt. Gülen, in the United States since 1999, remains elusive as Washington still examines Turkey's extradition request for him and other high-ranking figures of the group after the 2016 attempt.

In Gaziantep, a city bordering Syria, a court sentenced Brigadier General Murat Sosyal and Lieutenant Colonel Hakan Çınar to aggravated life imprisonment. The court handed down prison terms ranging from seven years to 18 years to 34 other defendants in the coup trial. Soysal was commander of a brigade in the city and would be appointed as "commander of Gaziantep and (neighboring) Kilis" if the putschists succeeded. Soysal was accused of plotting to take control of the city. He denied his links to the coup attempt and claimed he was just told by his superiors that he was appointed as "martial law commander" on July 15, 2016. Most defendants say in their defense that they were not aware of a coup attempt unfolding and simply acted as "martial law commanders upon a likely massive terror attack."