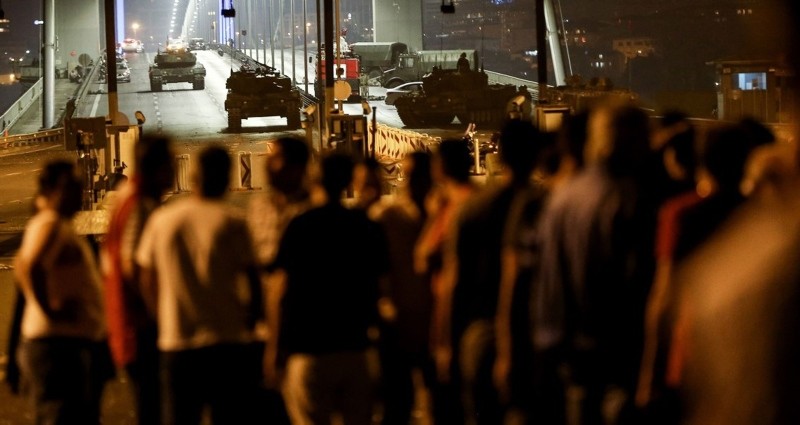 An Istanbul court sentenced 84 putschists to aggravated life on coup charges and for the killing 34 people, who resisted the putschists invading a key bridge in the city during the July 15, 2016 coup attempt perpetrated by the FETÖ terrorist group

The Istanbul 25th High Criminal Court in Silivri district handed down aggravated life sentences to 72 former military officers Thursday for their involvement in the July 15, 2016, coup attempt by the Gülenist Terror Group (FETÖ).

Twelve of the 84 defendants were separately sentenced to aggravated life imprisonment for the murders of two civilians, among a total of 34, on Istanbul's Bosporus Bridge, that connects Istanbul's Asian and European sides. Following the coup attempt, the bridge was renamed to July 15 Martyrs' Bridge.

The defendants had captured the bridge on the evening of July 15. They killed 34 people, including two police officers, who confronted them and tried to convince them to lay down arms.

The iconic image of soldiers standing ground on the bridge that night was one of the first signs of a coup attempt for millions watching the attempt live on TV across Turkey. Seven coup plotters on the bridge were also killed in a shootout with security forces while the bridge was completely liberated from putschists in the early hours of July 16.

More verdicts are expected to be issued by the Istanbul 25th Heavy Penal Court in Silivri district for 71 other defendants in the case.

Erol Olçok and his 17-year-old son Abdullah Tayyip Olçok were among the anti-coup heroes, killed on the bridge by putschists. Olçok was a campaign manager for the ruling Justice and Development Party (AK Party) and close friend of President Recep Tayyip Erdoğan. The 12 defendants, sentenced to life in Thursday's trial, are accused of murdering the father and the son.

The court also sentenced 22 defendants to 17 years and six months in prison for aiding the coup attempt, while five others received 15-year prison terms on same charges.

The courtroom is designed specifically for large-scale coup trials and has a capacity of 700 seats. It was full as more than 1,000 people were present for the final hearing and some were forced to wait outside.

A 300-page detailed verdict will be released later while lawyers for plaintiffs have seven days to appeal the sentences and acquittals.

Among defendants sentenced to aggravated life imprisonment are Lt. Col. Turgay Ödemiş and Maj. Ahmet Taştan. Both men were commanding soldiers on the bridge and security camera footage have captured moments as they defiantly stood behind a line of troops who knelt and opened fire on civilians confronting them.

All defendants were arrested when they surrendered to security forces in the aftermath of the coup attempt that killed 250 people across the country and their trial began in October 2017.

Speaking to reporters outside the courthouse, the ruling Justice and Development (AK) Party deputy chairman and spokesman Mahir Ünal said the trial was "critical" as the bridge was the "starting point" of the coup attempt.

"Justice has prevailed as we approach the second anniversary of the coup attempt," Ünal said.

The accused suspects fired multiple weapons, including rifles and pistols. The putschists also used a tank, which fired four times on a crowd gathered near the bridge, according to prosecutors.

According to the indictment, the defendants were dispatched from a military school and a tank division, stationed in the city in line with the plan of the coup plotters, who had gathered at the military school days before the coup attempt to plan the takeover of the city.

The indictment added that the takeover of the bridge took place about one hour after a putschist colonel told his soldiers that "the military has assumed control" and ordered them to occupy critical locations.

Some two hours after the soldiers took full control of the bridge, a large crowd arrived to confront them. Istanbul Police Chief Mustafa Çalışkan later joined the crowd and one of his bodyguards was among those killed by the soldiers on the bridge.

After the coup failed in the face of an unprecedented show of public resistance in Turkish history, tens of thousands have been detained or arrested for suspected involvement in the coup attempt.

The first coup trials began in December 2016 and several high-ranking military officers have already been sentenced to life in prison.

FETÖ leader Fetullah Gülen, who currently lives in Pennsylvania, U.S. is the prime suspect in the coup cases and faces life imprisonment. However, Gülen has not returned to Turkey to attend the trials and Ankara has been actively seeking his extradition from the U.S.

Posing as a religious charity movement, his Hizmet (service) movement infiltrated Turkey's judiciary, police, bureaucracy and military for decades. In 2013, the group tried to seize power through its followers in the judiciary and law enforcement, under the guise of graft probes targeting the government.

Following a crackdown, it moved to seize power again in 2016, in a plot allegedly conceived by Adil Öksüz, a fugitive theology lecturer who acted as Gülen's right-hand man in the coup attempt.