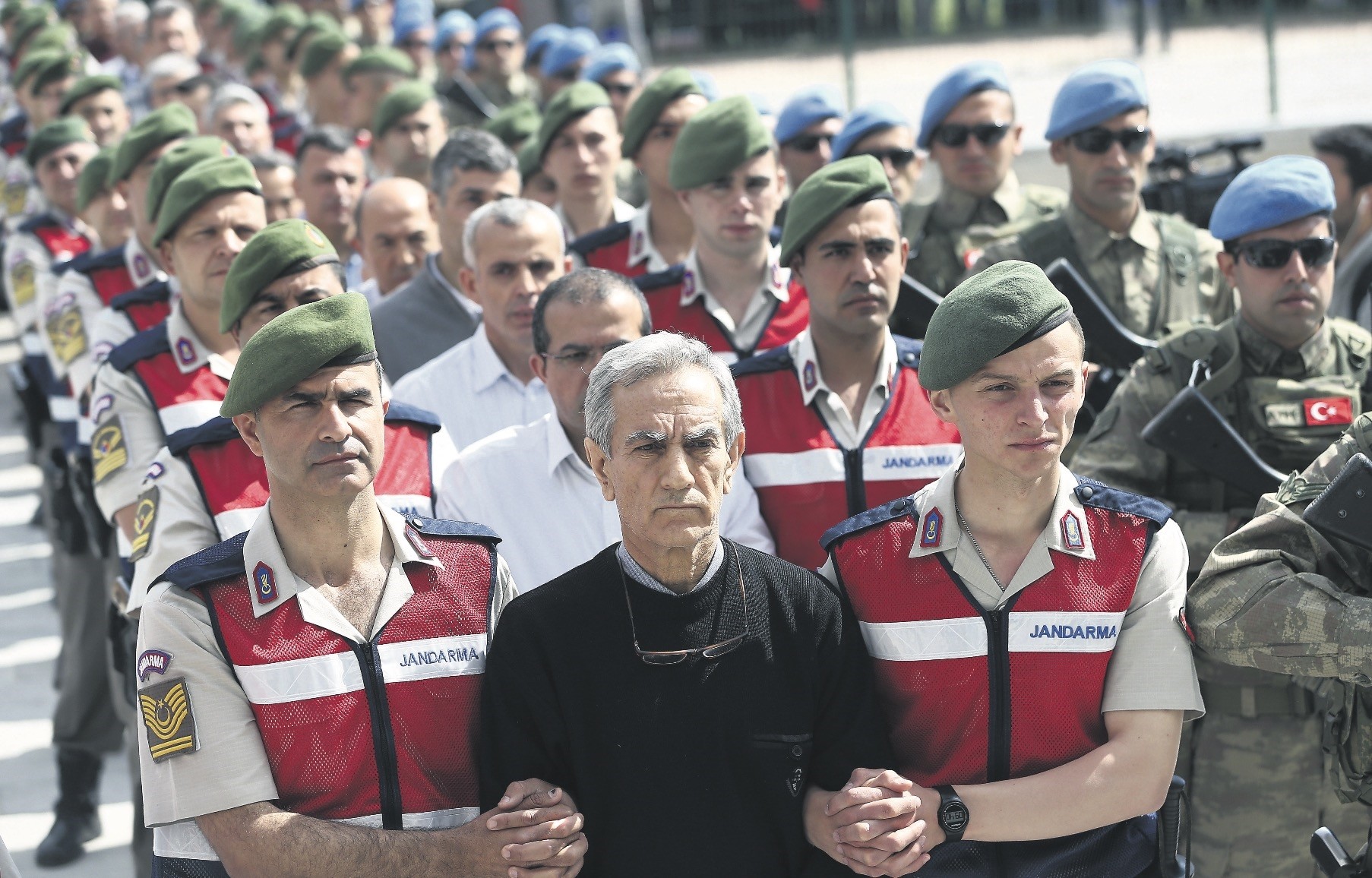 Aku0131n u00d6ztu00fcrk, the former general accused of commanding the putsch attempt and other defendants accompanied by troops at the first hearing of a trial in the capital Ankara in May 2017.
by daily sabah
Jul 14, 2018 12:00 am

Trials are half the battle in the fight against FETÖ putschists. Mobilized to hold coup plotters accountable for their crimes, the judiciary has so far handed down prison terms to 2,381 people in coup trials, including 734 sentenced to aggravated life imprisonment

Its democracy tested by multiple coups, Turkey managed to stave off one successfully for the first time on July 15, 2016. Unable to try perpetrators of past coups for years due to a lasting system of military tutelage, Turkey finally has a chance to deliver justice. In a delicate legal pursuit, the judiciary strives to keep the scope of trials as wide as possible under the watchful eye of a public with an overwhelming interest in the trials. In some trials, busloads of people accompany the families of victims, survivors and plaintiffs to the courthouses for each hearing.

Life sentences for defendants are a relief for the public, and though calls for reinstatement of the abolished death penalty are still sounded in social media, many are apparently satisfied with aggravated life sentence, the highest sentence in Turkish law for such a crime. Associations representing coup attempt survivors are unanimous in their praise of maximum sentences. Tarık Şebik, the head of the July 15 Association, which stages protests against coup plotters at coup trials, said they closely monitor the trials. "These heinous people should not think that society is not reacting to what they have done. People are angry and demonstrate it outside the courthouses," Şebik told Anadolu Agency (AA), referring to protests against putschists. The association offers transportation for anyone who wants to attend the trials and regularly updates its social media followers on the state of trials.

Justice needs to be swift as the country seeks to deter future attempts to derail its democracy. For this reason and with a chance to capture putschists red-handed, the judiciary has a task both easy and hard at the same time. Obvious evidence - from security camera footage to personal testimonies of survivors and FETÖ members - and confessions by defendants can be helpful, but the sheer scale of trials where hundreds were being tried based on indictments consisting of thousands of pages prolong the judicial process. Prosecutors all across Turkey sift through evidence in more than 100,000 investigations, some concluded, some expanded and underway.Those sentenced to life and aggravated life imprisonment were mostly high-ranking officers who commanded troops in the coup attempt. Conscripts and some lower-ranking officers are often spared from sentencing. Ninety-five trials are still underway, but authorities expect them to be wrapped up by the end of this year, save for trials of fugitive suspects.

Some key trials that are concluded include one in the southwestern province of Muğla where a team of putschists tried to kill President Recep Tayyip Erdoğan. Brigadier General Gökhan Şahin Sönmezateş, one of few defendants to openly admit his role in the coup attempt, and 30 others were handed down four instances of aggravated life imprisonment on coup charges and killing police officers guarding the hotel where the president stayed.

In the first verdict in coup trials in the capital Ankara where Parliament and the presidential complex were targeted by putschists and an air base that served as command center of the nationwide attempt is located, 18 defendants were sentenced to aggravated life imprisonment in June 2017. They were putschists behind the abduction of Fahri Kasırga, secretary-general of the Turkish Presidency. In a high-profile trial in Ankara, Hakan Üstem, commander of the Turkish Coast Guard, was sentenced to life for his role in the attempt. Other concluded trials in Ankara include a trial on the abduction of Gen. Kamil Başoğlu, a trial on the takeover of several military bases and the headquarters of Türksat, the country's main satellite provider. The most anticipated trial in Ankara was probably the one about the killing of Ömer Halisdemir, a Special Forces officer posthumously declared a hero for killing one of the ringleaders of the coup attempt. Eighteen were sentenced to life imprisonment for Halisdemir's murder.

In Istanbul, 84 were sentenced to life for their role in the takeover of the Bosporus Bridge, which connects the city's two sides and which was renamed the July 15 Martyrs' Bridge after the coup attempt. Sentences last Thursday were the latest in coup trials across the country. Defendants were accused of killing 34 people in an anti-coup crowd on the bridge that night.