Germany a haven for thousands linked to FETÖ terrorist group 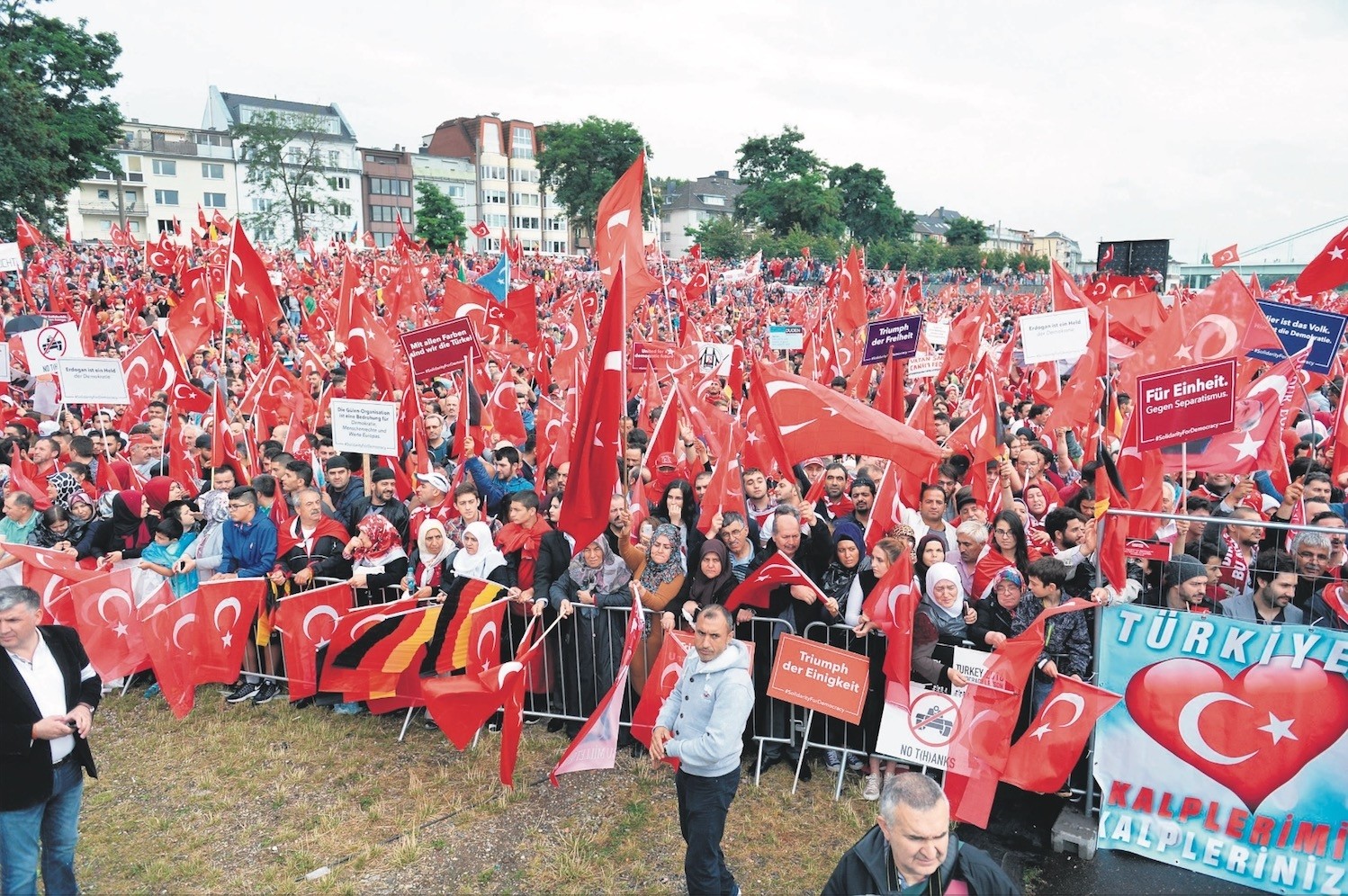 Turks attend a democracy rally in Germanyu2019s Cologne in August 2016 to protest the coup attempt by FETu00d6. Hundreds of FETu00d6 members sought asylum in Germany after the attempt.
by daily sabah
Jul 16, 2018 12:00 am

A terrorist group finds a new home in the heart of Europe as Germany houses about 14,000 suspects linked to the terrorist group FETÖ, which is accused of a coup attempt and many other crimes in Turkey

For Turkey, Germany is no stranger to controversy, giving asylum to terror suspects wanted by the country. It has been historically home to a large number of supporters of the PKK and other groups recognized as terrorists by Turkey and the European Union. Nowadays, it is the favorite destination for another such group - the Gülenist Terror Group (FETÖ).

FETÖ is distinguished from the PKK and others for its sinister methods and is accused of carrying out the July 15, 2016 coup attempt that killed 250 people in Turkey through its infiltrators in the military. Still acting under the guise of a charity movement, FETÖ is widely tolerated in Germany where about 14,000 of its members who fled Turkey following the coup attempt reside.

Both federal and state governments embrace FETÖ members and turn a blind eye to their activities. It makes Germany a favored destination for the terrorist group whose members are sought by Turkey around the world. While most of Turkey's other allies, especially countries in Africa, cooperate with Ankara in shutting down FETÖ schools and deporting the group's members, Germany often faces criticism from Turkish officials for its tolerant policy towards Gülenists.

Along with the embrace by Berlin, FETÖ members find assistance from fellow members of the group in the form of a non-profit that seemingly aims to help "refugees." Aktion für Flüchtlingshilfe (Aid Action for Refugees), linked to FETÖ, helps the group's members arrived from Turkey to learn German and find jobs and accommodation in the country.

Group members who give interviews to German media outlets confirm an exodus of Gülenists from Turkey to Germany in the aftermath of the thwarted coup attempt two years ago. Some senior figures in the group, such as Abdullah Aymaz and Mehmet Ali Şengül, who are among the most wanted terror suspects by Turkey, are known to be in Germany. Aymaz, who joined FETÖ while its leader Fetullah Gülen was still an obscure preacher working in İzmir in western Turkey, is a member of Gülen's inner circle. Gülen currently resides in Pennsylvania in the United States. Turkish media describe Aymaz as the "Europe imam" for FETÖ, a name given to senior figures in the group in charge of dozens and sometimes thousands of followers. He left Turkey shortly after FETÖ's first coup attempt in 2013 failed. A few months before the 2016 coup attempt, Aymaz penned an arti

cle in a FETÖ-linked newspaper, hinting at an imminent coup. Mehmet Ali Şengül, another high-ranking figure in the terrorist group, was one of the names to replace Gülen in case of the latter's death, according to reports in the Turkish media.

One of the most significant figures linked both to FETÖ and the 2016 coup attempt who is believed to be in hiding in Germany is Adil Öksüz. Öksüz is the alleged mastermind of the attempt. Anadolu Agency (AA) reported last month that Öksüz, one of the most wanted men in Turkey, lives or lived for a while in Berlin after the coup attempt.

Ankara has often accused Germany and other European countries for inaction on FETÖ members, particularly those who fled to Europe after the coup attempt. Speaking to reporters about the issue, Foreign Minister Çavuşoğlu has said they expected Germany to extradite Öksüz if he is caught though Germany could not confirm if Öksüz was in the country. Last November, an Ankara court formally drafted a request for the extradition of Öksüz from Germany after reports of sightings of Öksüz in various German cities.

Data from the German Interior Ministry show that 296 people bearing diplomatic passports and 881 others with service passports - issued to public sector employees, soldiers etc. - applied for asylum in Germany from July 2016 to June 2018, and most are believed to be FETÖ infiltrators in the military and bureaucracy. Half of them were granted asylum.

After the coup attempt, FETÖ tried to keep a low profile in Germany amid a backlash from the Turkish community in the country. Half of the "study centers" that offer classes for Turkish children were closed down, while three out of 25 FETÖ-linked schools had to be closed when Turkish families pulled their children from those schools after the coup attempt. Seeking to hide their connections to FETÖ, those schools started changing names. For instance, the Dialogue High School in Cologne, which was named after Gülen's "interfaith dialogue" initiative, was renamed the Ferdinand Franz Wallraf Gymnasium. For survival, those schools count mostly on children of FETÖ suspects who fled Turkey in 2016. FETÖ also runs the Federal Union of Entrepreneurs' Association, a business association active in 19 German cities. Like schools, FETÖ-linked businesses often change names.

The terrorist group also runs a lobby group to restore its tarnished image and is known to funnel millions of euros for PR campaigns in favor of what they called the Hizmet (Service) Movement. News portals, such as dtj-online, are among the mouthpieces of Gü

lenists who are mostly active in online media. The group also runs online TV MCEU, which spreads Gülenist propaganda. Ercan Karakoyun, head of FETÖ's Dialogue and Education Foundation, serves as a spokesman of FETÖ in Germany. Karakoyun is the go-to FETÖ member for German media outlets reporting on the group. He told Germany's Die Zeit weekly last year that Germany has been "a new center" for the group, citing it "cannot survive in Turkey." Karakoyun has said that the group has a significant presence in Germany, adding that new arrivals "will be as active there as they were in Turkey."