More apply for asylum in Greece as it embraces terror suspects 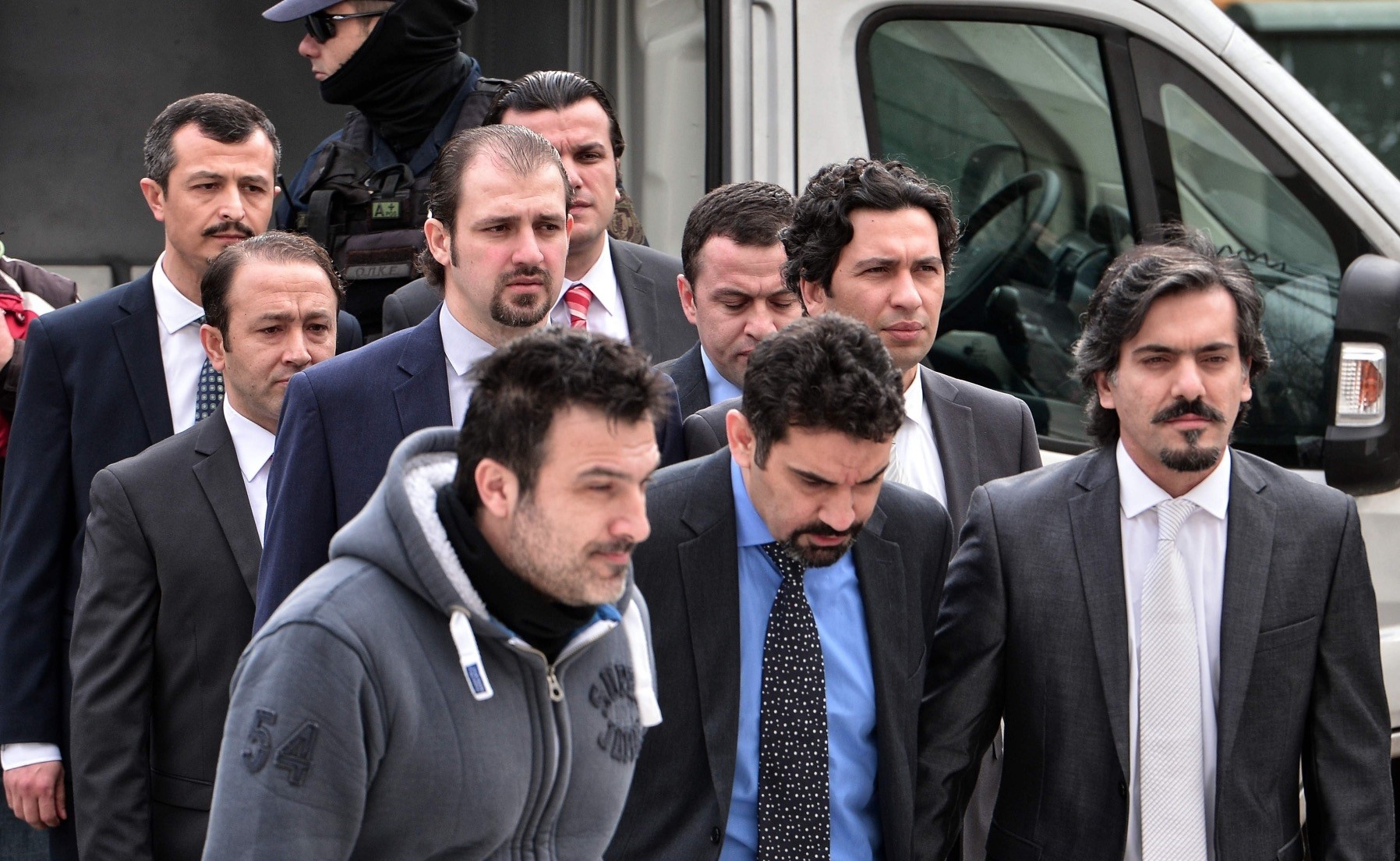 Eight suspected putschists wanted by Turkey are escorted by Greek police as they arrive at a court in Athens in 2017. Greece granted asylum to three among them, to the chagrin of Ankara.
by Daily Sabah Sep 13, 2018 12:00 am

Under the government of Prime Minister Alexis Tsipras, Greece is rapidly becoming a safe haven for terror suspects fleeing Turkey, with more seeking asylum there in the aftermath of the July 15, 2016 coup attempt by members of the Gülenist Terror Group (FETÖ). Asylum applications from Turkey to Greece, which totaled 1,825 in 2017, rose to 2,463 within the first eight months of 2018. It is a considerable increase compared to the 189 people who applied for asylum in 2016.

Figures for the years between 2013 and 2018 released by Greece's Migration Policy Ministry apparently started rising in 2016, with only 42 people applying for asylum in Greece in 2015.

Turkey has repeatedly accused Greece of being a haven for terrorists who committed crimes against Turks. Although the two countries strive to put a past stained with hostilities behind them, Athens has recently angered Ankara over a string of decisions for asylum and the release of terror suspects wanted by Turkey. Most recently, it released two suspects involved in the 2016 coup attempt. Halit Çetin and Fatih Arık, members of an elite underwater offense commando unit of the Turkish Army, fled to Greece in 2017 after Turkey issued arrest warrants for the duo for their involvement in the coup attempt. In line with legal procedures, Çetin and Arık were taken into custody and held in a refugee camp for 18 months, a formal period for detention. They were later relocated to a secret place instead of extradited to Turkey. Earlier this year, Greece granted asylum to three out of eight putschist soldiers who fled Turkey to the chagrin of Turkish authorities.

The suspects, who hijacked a military helicopter and landed in Greece hours after the coup attempt was thwarted, were released from custody in May after a mandatory detention period of 18 months expired. They are being held "in a safe place outside Athens" until the conclusion of asylum requests, according to Greek media outlets. FETÖ is accused of carrying out a coup attempt that killed 250 people through its infiltrators in the military. After strong public resistance helped quell the attempt, Turkey launched a nationwide crackdown and a global campaign to bring members of the terrorist group to justice. The number of suspected members of FETÖ trying to flee to Greece increased in the same period, with more Gülenists encouraged by the lax treatment of putschists seeking to cross into the country. Ankara has formally requested from Greece the extradition of FETÖ members behind the coup attempt so they can face trials in Turkey. Greece has repeatedly denied the applications.

Turkey, meanwhile, stepped up security measures on its land and maritime borders. Like illegal immigrants, FETÖ members mostly use the Aegean and Mediterranean route to reach Europe where most countries tolerate the terrorist group and even grant them asylum. Most suspects who try to flee Turkey are those with outstanding arrest warrants and those dismissed from their public sector jobs for their links to the terrorist group.

Apart from FETÖ, Greece has been criticized for harboring members of far-left terrorist groups. Recently, Greek courts ordered the release of members of the Revolutionary People's Liberation Party-Front (DHKP-C), which is recognized as a terrorist group by the European Union. The DHKP-C, perpetrators of a series of crimes in Turkey including the killing of a prosecutor and the bombing of a U.S. embassy, long enjoyed protection in Greece where its members wanted by Turkey stayed in Lavrion refugee camp, claiming persecution in Turkey.