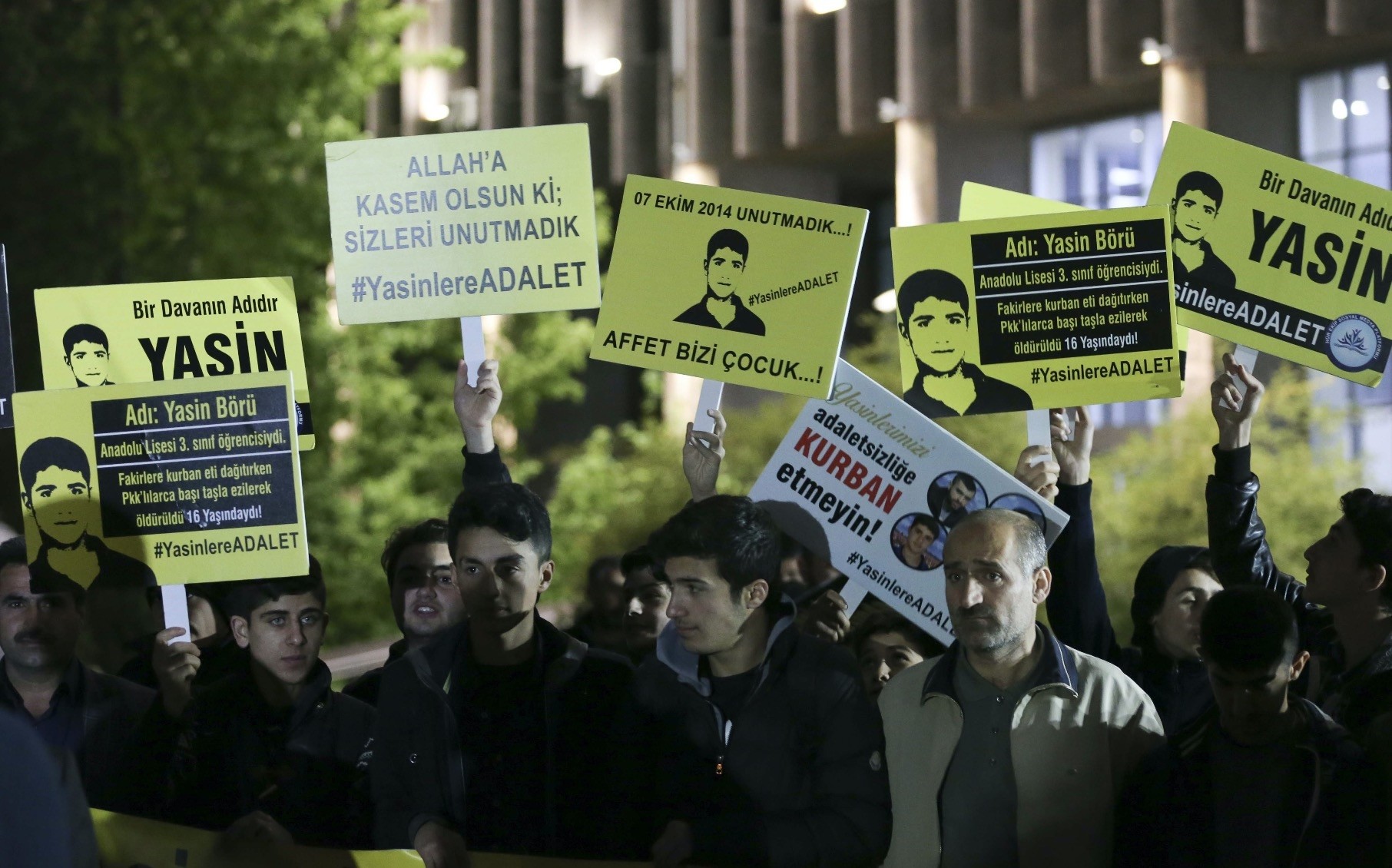 People stage a rally outside an Ankara courthouse, holding banners with pictureS of Yasin Bu00f6ru00fc, the teenage victim of PKK riots in Diyarbaku0131r, after a trial of those accused of killing Bu00f6ru00fc and his three friends.
by Daily Sabah with AA Sep 17, 2018 12:00 am

Confessions of a member of the terrorist group PKK regarding three days of riots in 2014 that claimed 50 lives, reveal how the opposition Peoples' Democratic Party (HDP) was actively involved in the riots and how they plotted terror attacks in the party's offices in the southeastern province of Gaziantep.

H.A., identified only by his initials, is among 11 defendants in a case against the PKK in Gaziantep where five people were killed and 39 others were injured in a string of riots that plagued the city on Oct.8, the last day of three days of violence in Turkey. Riots had started ostensibly to protest Turkey's opposition to PKK-linked groups in Kobani, a Syrian town near the Turkish border and were a pretext for the PKK to end a brief lull in its campaign of violence.

According to the indictment, H.A. and other suspects were accused of membership in a terrorist group, and all were involved in Gaziantep riots. H.A. invoked a remorse law that allows reduced sentence for suspects confessing their crimes and giving information about terrorist groups. In his testimony, suspect said Talhat Y., another defendant in the case, coordinated the violence in which he and others were involved. "I first met him in 2005, and in 2008, he ordered us to attack a grocery store whose owner did not vote for pro-PKK candidates in elections. We vandalized the store on his orders," he confessed. Six years later, he and others convened in local offices of the HDP in Gaziantep where Talhat Y. ordered them 'to carry out a sensational attack'." "We tossed firebombs at a police vehicle and a store during [riots]," H.A. said in his testimony. He said another suspect, who later served as HDP chairman for the party's office in Gaziantep's Şahinbey district, opened fire on a police car during the riots and Talhat Y. recorded the attacks on his cellphone.

In October 2014, amid the Daesh siege on Kobani, HDP leader Selahattin Demirtaş and other HDP officials called for a major riot, dubbed as the Oct. 6-7 Kobani protests that led to clashes between pro-PKK and conservative Kurdish groups and security forces throughout Turkey, especially in the southeast. The PKK is blamed for the majority of deaths, including the brutal lynching of 16-year-old Yasin Börü and his three friends. Börü, youngest of the group, were collecting donations for an aid campaign by a Muslim charity when they were cornered by a pro-PKK group in the southeastern province of Diyarbakır during the riots. They were stabbed, beaten and thrown out the window of a residential building by the PKK supporters.

The riots were a major blow for the HDP and its public face Demirtaş, who repeatedly stated that they aim to be an umbrella party appealing to all of Turkey instead of a regional and ethnic party. Their later calls, however, found little support.

The HDP has come under fire for its close links to the PKK, which is listed as a terrorist organization by Turkey, the U.S., and the EU. Members of the party have so far declined to call the PKK a "terrorist group" and openly displayed their support for the group by showing up at funerals for slain PKK militants. Demirtaş is already in jail and was sentenced to four years and eight months in prison for carrying out terrorist propaganda. In November 2016, 13 HDP lawmakers were arrested, and 9 of them, including HDP co-chair Figen Yüksekdağ, remain under arrest awaiting trial on charges related to being members or leaders of and committing crimes for the PKK. The lawmakers face prosecution under anti-terrorism legislation after their parliamentary immunity was lifted in May 2016.