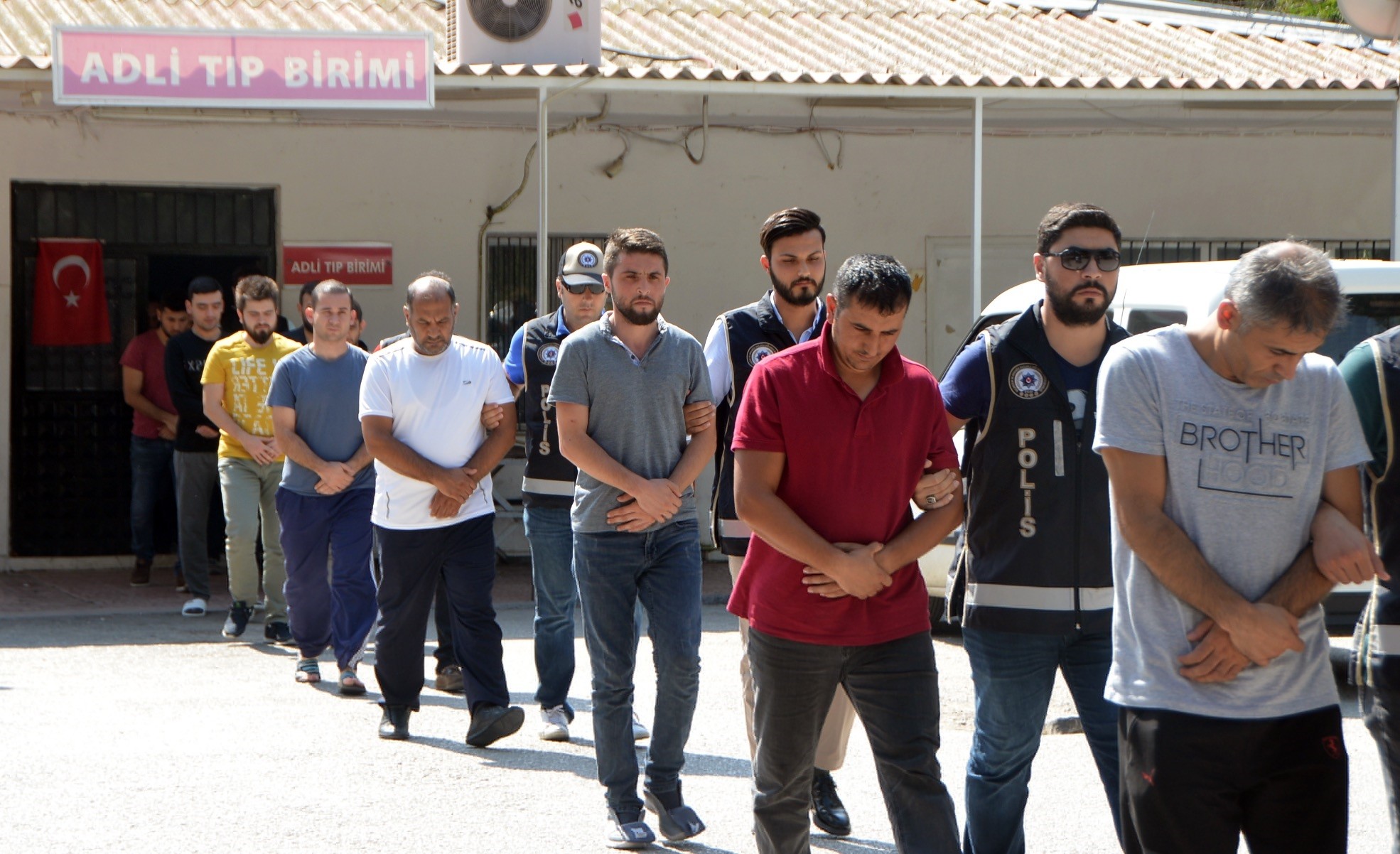 Police escort FETu00d6 suspects including former and active soldiers after they were detained in the southern province of Adana, Sept. 22.
by Erkam Çoban Sep 26, 2018 12:00 am

Turkey's persistent struggle against the FETÖ terrorist group blamed for a violent coup attempt in 2016 continues unabated with more than 18,000 suspects detained so far this year and some 2,000 secret FETÖ members in the police and judiciary facing probes

Ever since it tried to topple the government in 2016, the Gülenist Terror Group (FETÖ) has faced a heightened crackdown. Working tirelessly to uncover the vast network of Gülenists infiltrated in major state institutions, security forces nabbed more than 18,000 people in the first nine months of this year. A criminal investigation, meanwhile, is targeting about 2,000 FETÖ suspects who infiltrated into civil administrations, law enforcement and the judiciary.

The terrorist group's infiltrators in the military moved to seize power on July 15, 2016 just as authorities were about to start a widespread purge of hundreds of secret Gülenists in the Turkish Armed Forces (TSK). Some 250 people were killed in the coup attempt that was thwarted thanks to an unprecedented public resistance. The group was already facing multiple criminal inquiries and trials when the coup attempt took place, due to two 2013 attempts to topple the government by FETÖ-linked police and judiciary.

Security forces concluded preliminary investigations into FETÖ infiltrators in provincial government offices, law enforcement and judiciary who contacted their "imams," or FETÖ handlers, in charge of infiltrators through payphones. Some 2,000 suspects were identified in the investigation that revealed secret tactics the group employed to avoid detection. A similar investigation in the TSK has seen the detention of hundreds of serving and former soldiers.

FETÖ is known for its utmost secrecy that is likened to the tactics of professional intelligence agencies by authorities. Senior figures of the group never directly contacted other members and often used point men who arranged secret meetings, former Gülenists say. Prior to the coup attempt, Turkish intelligence discovered that the terrorist group used - and believed to have developed - ByLock, an encrypted messaging app, exclusively to relay high-ranking members' instructions to FETÖ members.

Earlier investigations into the "payphone method" uncovered about 50,000 in the army with suspected links to FETÖ. Investigations and confessions of former members show that "imams" called the infiltrators, from colonels to non-commissioned officers, from payphones in busy places when they sought a meeting.

A large portion of some 2,000 suspects are still in office, according to the investigation in which millions of calls to and by suspects were sifted through.

In related news, a report by the Anadolu Agency (AA) based on data provided by the Interior Ministry shows 18,516 suspects were arrested in the first nine months of 2018 and 3,380 of them were jailed. FETÖ, which expanded its clout in Turkey over the past three decades, is known for its wide network of infiltrators in law enforcement, the military, judiciary and bureaucracy. Through its infiltrators in the police and judiciary, it first tried to topple the government in 2013 by implicating people close to the government in an anti-graft probe with trumped-up evidence and false charges.

The state of emergency declared after the coup attempt sped up the crackdown on the terrorist group's infiltrators. Tens of thousands were detained or arrested and dismissed from their jobs in the public sector after the attempt.

Some FETÖ members managed to flee abroad, while others are believed to still be hiding their ties to the group. Fetullah Gülen, the U.S.-based leader of the terrorist group, is known for instructing his followers to disguise themselves. Several former members confessed to authorities that senior figures of the group trained them on how to avoid being detected while serving in the army, law enforcement or judiciary. FETÖ claims to be an Islamic movement and was identified as such, still calling itself the Hizmet (Service) Movement; thus, its infiltrators were told to abstain from anything that would associate them with Islam, such as prayer or wearing headscarves, and were urged to pretend to drink alcohol.