Number of illegal migrants caught at sea rises in 2018 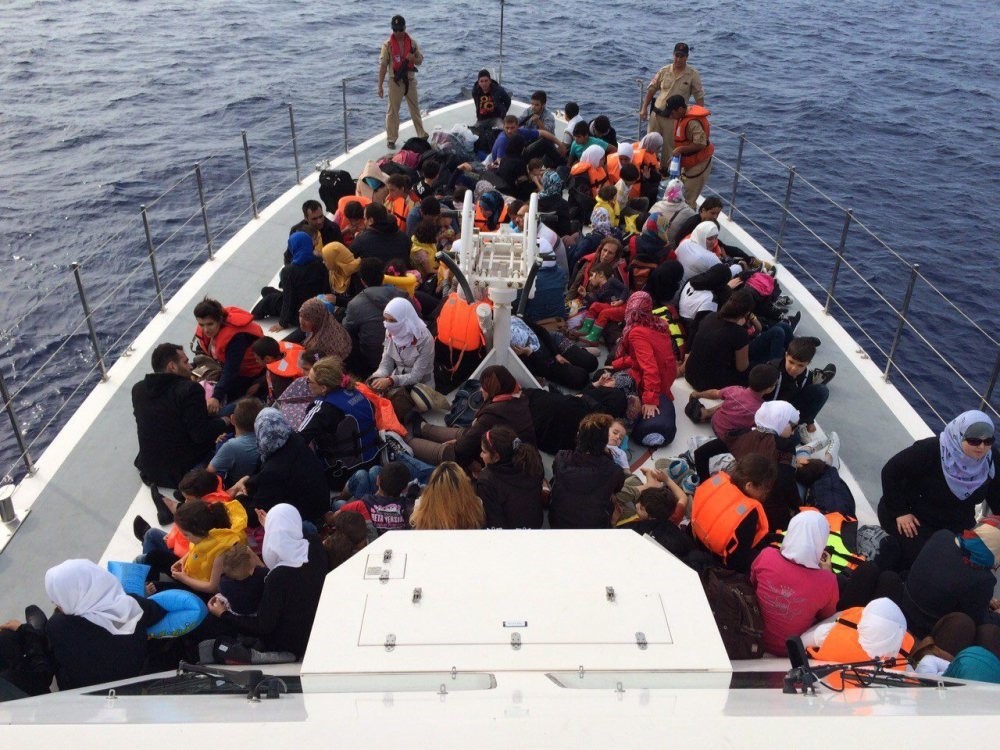 Syrian migrants aboard a Turkish Coast Guard boat after they were intercepted off the shores of Finike in southern Turkey.
by Daily Sabah with AA
Oct 03, 2018 12:00 am

With no end in sight to conflicts and other challenges across the world, Turkey remains a popular route for illegal migrants. Nearly 20,000 migrants were intercepted so far this year in the three seas around Turkey

Connecting Asia to Europe, Turkey is no stranger to a continuous flow of migrants. The influx of illegal migrants, however, rose considerably in recent years due to the war in neighboring Syria, other conflicts around the world and poverty affecting underdeveloped countries. Last month alone, Turkey intercepted 3,020 illegal migrants in the Aegean, Mediterranean and the Black Sea. Some 19,685 illegal migrants trying to take the sea routes were stopped by Turkey in the first nine months of 2018 - a significant rise from 15,540 last year.

Turkey's seas, particularly the Aegean in the west, saw a large influx recently with more migrants boarding dinghies to reach Europe. They travel in overcrowded and unsafe boats to reach Greek islands scattered across the Aegean and only a few kilometers away from Turkish shores.

Figures by the Turkish Coast Guard Command that is tasked with stopping illegal migrants perusing the sea route, shows 88 separate cases of illegal migrants were recorded in September alone and 2,993 out of 3,020 people stopped at sea route were intercepted while traveling across the Aegean Sea. Also in September, nine migrants en route to Greece died when their boat capsized. In the same month last year, 3,407 migrants were intercepted in all Turkish seas and 24 people drowned.

Overall numbers show 18,485 out of 19,685 were stopped in the Aegean Sea and 72 migrants drowned or succumbed to hypothermia in the first nine months of 2018. The casualties are higher compared to 51 people died last year in their "journey of hope" to seek asylum in European countries.

Deaths are common in crossings as many migrants, despite paying thousands of dollars to smugglers, are forced to travel in rubber boats. Though the boats are good for short journeys, they often operate way above their holding capacity, and more often than not, smugglers leave the steering to the migrants, inexperienced in navigating a crowded boat, and are forced to travel in bad weather, especially in winter.

Europe remains the closest chance for many to have a chance at a better life, although European Union countries where far-right movements that have gained momentum in mainstream politics increasingly tighten measures to stop the immigrant flow.

In March 2016, the EU and Turkey reached an agreement to stop irregular immigration through the Aegean Sea, and improve the conditions of more than 3 million Syrian refugees in Turkey. An exchange program that would return migrants that previously entered Europe to Turkey and settle Syrian refugees in EU countries failed to curb the immigrant flow, as the high rate of illegal migrants intercepted by Turkey indicates.