Saudis allow consulate search over fate of Khashoggi amid pressure 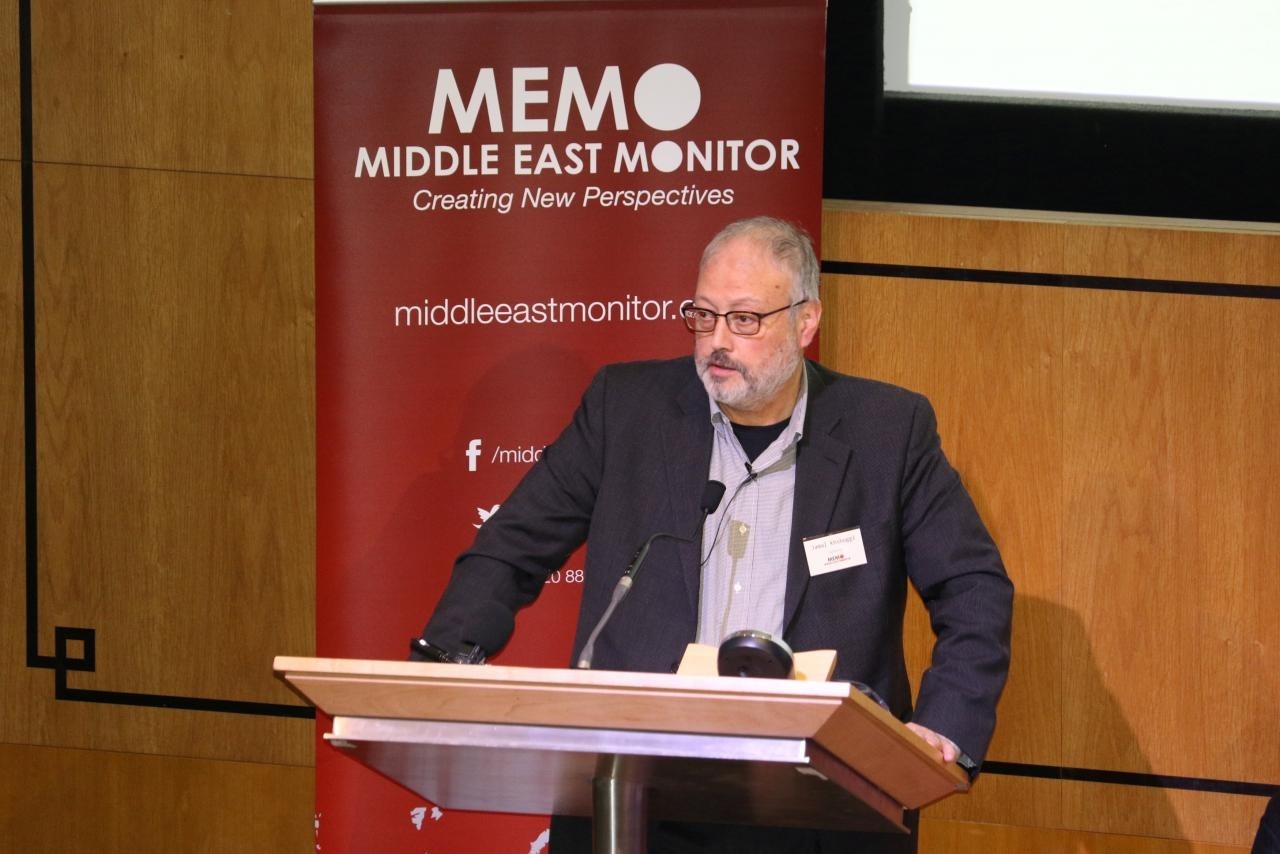 One week after Saudi journalist Jamal Khashoggi disappeared at the Saudi Consulate in Istanbul, Saudi Arabia allowed Turkey to search the premises as the international community continues to express concern over his fate in light of Khashoggi's critical views of the Riyadh regime

It has been exactly one week since Jamal Khashoggi entered the Saudi Consulate in Istanbul and vanished into thin air. Saudi Arabia, which flatly rejected accusations that it was behind his forced disappearance – or murder as unconfirmed reports say – has allowed Turkish authorities to search the premises, the Turkish Foreign Ministry announced yesterday. A renowned journalist who recently raised his voice against arbitrary arrests by Saudi Arabia, Khashoggi was last seen entering the consulate in Istanbul's Levent district to acquire paperwork to marry his Turkish fiancee.

Turkish authorities have closely followed the case as international reaction to the incident grows, with more people calling on Saudi Arabia to give a credible explanation about his disappearance, though Riyadh repeatedly says Khashoggi left the consulate.

The note, as reported by AA, says the invitation is based on the importance that the Kingdom of Saudi Arabia has attached to finding out the truth about the disappearance of Khashoggi. Turkish security sources have shared little with Turkish media on the matter, though foreign media has often quoted local security sources who say they suspect Khashoggi was murdered and his body was taken out of the consulate. According to unconfirmed reports, a delegation of 15 Saudi officials arrived in Turkey immediately before the journalist's arrival at the consulate, and they later left. Demirören News Agency reported yesterday that security forces searched the planes before they left Turkey but found nothing suspicious.The Washington Post, where Khashoggi published his columns, also published a surveillance image showing the journalist entering the consulate building. The door Khashoggi walked in through appeared to be the main entrance of the consulate; however, the consulate has other entrances and exits as well through which Saudi officials insist he left.

It is unclear which camera the footage came from, nor who operated it; however, a number of closed-circuit surveillance cameras surround the area. Friends of Khashoggi say Turkish police have taken possession of footage from the neighborhood as part of their investigation. The Saudis have offered no surveillance footage or evidence to corroborate their claims. "If the story that was told about the murder is true, the Turks must have information and videotape and other documents to back it up," Fred Hiatt, the Post's editorial page editor, told The Associated Press. "If the story the Saudis are telling, that he just walked out ... after half an hour, if that's true, they ought to have facts and documents and evidence and tapes to back that up." Hiatt added that the "idea of a government luring one of its own citizens onto its own diplomatic property in a foreign country to murder him for the peaceful expression of his views would be unimaginable."

President Recep Tayyip Erdoğan on Monday urged the Saudis to respond to the allegations. "Whose duty is it to prove that he left or not? It is the duty of the consulate officials. Don't you have cameras and other things? Why don't you prove it?" Erdoğan said one day after Ankara summoned the Saudi ambassador in Ankara to request their "full cooperation" in the investigation.

INTERNATIONAL COMMUNITY REACTSU.S. President Donald Trump, who recently made headlines for his remarks that implied Saudi Arabia would not survive without U.S. assistance, also expressed concern about Khashoggi. "I don't like hearing about it. And hopefully that will sort itself out," Trump said. "Right now, nobody knows anything about it, but there are some pretty bad stories going around. I do not like it," he told reporters Monday. U.S. President Donald Trump, speaking at the White House yesterday, said he plans to speak with Saudi Arabian officials at some point about the disappearance of Saudi journalist Jamal Khashoggi, who went missing a week ago. On Sunday, Trump said he was concerned about reports regarding the journalist and did not "like hearing about it," but that he hoped the situation "that will sort itself out."

U.S. Secretary of State Mike Pompeo also called on Saudis to support a "thorough investigation" into the matter. "As the president has conveyed, the United States is concerned by his disappearance. State Department senior officials have spoken with the Kingdom of Saudi Arabia through diplomatic channels about this matter. We call on the government of Saudi Arabia to support a thorough investigation of Mr. Khashoggi's disappearance and to be transparent about the results of that investigation," he said in a statement. Republican Senator Lindsey Graham also expressed concern over the disappearance and said in his Twitter account that Riyadh must give "honest answers." "We agree if there was any truth to the allegations of wrongdoing by the Saudi government, it would be devastating to the U.S.-Saudi relationship and there will be a heavy price to be paid - economically and otherwise," Graham said.

The U.N. human rights office also expressed "serious concern" over Khashoggi's disappearance. Rights office spokeswoman Ravina Shamdasani says it would be "truly shocking" if reports of the death of Saudi journalist Jamal Khashoggi are confirmed. Shamdasani said during a U.N. briefing yesterday in Geneva that the rights office is urging Turkey and Saudi Arabia to cooperate and conduct an "impartial and independent investigation" into Khashoggi's disappearance in Istanbul and "to make the findings public." In a tweet yesterday, British Foreign Secretary Jeremy Hunt said he met the Saudi ambassador to seek "urgent" answers over Khashoggi. "Violence against journalists worldwide is going up and is a grave threat to freedom of expression. If media reports prove correct, we will treat the incident seriously - friendships depend on shared values," Hunt said.

FRIENDS SUSPECT HE WAS MURDERED

Friends of Khashoggi believe he was murdered or taken somewhere else from the consulate. Sabah newspaper reported in its website yesterday that Khashoggi might have been taken abroad aboard a private jet. Sabah's report says a delegation of 15 Saudi officials who were at the consulate when Khashoggi arrived left about two and a half hours after his entry to the consulate. The delegation left the consulate with a black van with tinted windows and another vehicle and headed to a nearby residence of the Saudi consul-general. They stayed there for four hours, and police believe that one of the occupants of the black van was Khashoggi, the Sabah report says. The cars then left the residence of the consul-general, and police are now examining security camera footage from along the route the two cars took during the delegation's stay in Turkey.

Speaking to reporters outside the Saudi Consulate in Istanbul, Turkish journalist Turan Kışlakçı, a close friend of Khashoggi, said they had several questions that needed to be answered about the Saudi journalist's disappearance. "We stand by our claim that he entered the consulate but never left it," Kışlakçı said, disputing the Saudi account of the incident. "We know Saudi officials know everything about it. The consulate said security cameras in the consulate were not working that day. We wonder why they didn't work. We call upon the international community not to abandon monitoring this incident. This is something that should not happen in this era," he said. Kışlakçı also called on officials to make all the evidence regarding the incident public.

VICTIM OF LARGE-SCALE PURGE OF DISSIDENTS?

The 59-year-old journalist was once close to the Saudi regime but grew frustrated with its policies. Formerly editor-in-chief at Saudi newspapers and a media adviser to Prince Turki al-Faisal, he left Saudi Arabia in 2017 for a self-imposed exile in the United States in the wake of what many perceive as the Saudi regime's crackdown on dissidents, including journalists like him. Crown Prince Mohammed bin Salman is behind a string of reforms as well as the crackdown that included a purge of royals and prominent business figures who were rounded up in an unprecedented operation. Prince Alwaleed bin Talal, whose short-lived satellite news channel Al-Arab was headed by Khashoggi, was among those detained in the roundup last year.

As a contributor to the Washington Post, Khashoggi has written extensively about Saudi Arabia, including criticizing its war in Yemen, its recent diplomatic spat with Canada and its arrest of women's rights activists after the lifting of a ban on women driving. "It was painful for me several years ago when several friends were arrested. I said nothing. I didn't want to lose my job or my freedom. I worried about my family. I have made a different choice now. I have left my home, my family and my job, and I am raising my voice," Khashoggi said in a September 2017 column in the Washington Post.