Report: Turkey certain Saudi journalist was killed at the consulate 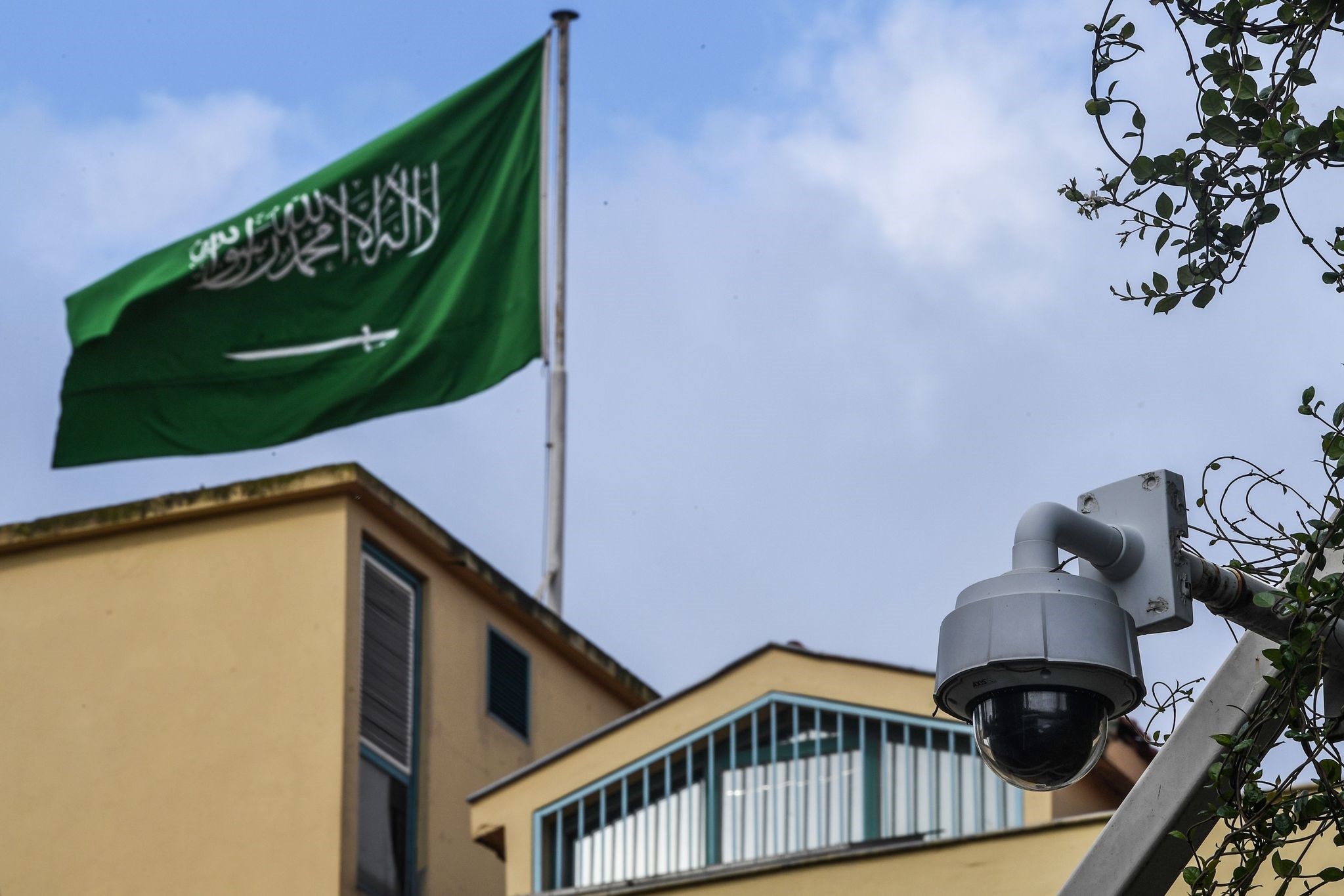 A surveillance camera outside the Saudi Consulate in Istanbul. Media outlets released camera images showing a black van leaving consulate for nearby residence of Saudi consul-general & reports say Khashoggi was forcibly taken there in the van.
by Compiled from Wire Services Oct 12, 2018 12:00 am

More than one week after the disappearance of Saudi journalist Jamal Khashoggi at his country's consulate in Istanbul, Turkish officials speaking to Middle East Eye say they had knowledge of the circumstances surrounding his ‘murder' inside the building and now suspect he was buried in the garden of the consul-general's residence

Pending a search of the Saudi Consulate in Istanbul, Turkish officials believe Jamal Khashoggi, a Saudi journalist critical of Riyadh, was murdered in the building on Oct. 2. Speaking to Middle East Eye, sources close to the investigation said the 59-year-old journalist was dragged from the consul general's office inside the building in Istanbul's Levent district and were murdered by two men who later proceeded to dismember his body. Officials, who did not disclose their names, said they knew when and where in the building Khashoggi was killed and hinted that he might be buried in the garden of the consul general's residence. "If the forensic team is allowed in, they know exactly where to go," a Turkish source with knowledge of the investigation told Middle East Eye.

Media outlets reported that Saudi officials withdrew their approval of a search by Turkish security forces of the premises regarding Khashoggi's disappearance after photos of Saudi "hit squad" sent to interrogate, torture, kill and dispose the journalist's body were published by Turkish media. Saudi media claims the "squad" in question were "Saudi tourists visiting Turkey" and not related to the incident. Indeed, reports show the 15 men in question checked in two hotels in Istanbul the day Khashoggi disappeared but they also flew back home the same day. Their identities as reported by Sabah newspaper show they are far from Saudi and came to see the sights in Istanbul. The delegation mainly consists of Saudi royal guards and a prominent forensic medicine expert.

The Sabah newspaper reports that a search of the consul general's residence may hold the key to the fate of Khashoggi. Surveillance camera footage shows two cars leaving the consulate for nearby residence of Consul General Mohammad Otaibi, about two hours after the journalist was spotted entering the consulate building. As a Mercedes Vito black van with license plates of 34 CC 1865 approaches the consul general's house, a man is seen talking on his phone outside and some five people entering the house. The van, presumed to be carrying Khashoggi, was then taken to the residence's garage, instead of parking outside.

Professor Hamit Hancı, who heads the Association of Forensic Experts, says a team of "cleaners" could have been sent by Saudi Arabia to dispose of the body of Khashoggi if he was murdered. Speaking to İhlas News Agency, Hancı said that technology was advanced enough to remove blood stains or even its odor through the use of chemicals. "You can invite anyone to search the scene after cleaning it properly," he said. Hancı said "professionals" could easily remove the body from consulate and there were "multiple scenarios" to what happened afterwards if this is the case. "It is possible to dismember the body and put body parts in small luggage and take it abroad. They could have chopped up the body to smaller pieces and dump it at sea or landfills and this would make their discovery more difficult," he said.

"A team of professionals can remove all evidence [of murder] in 24 hours and it has been a week [since the disappearance of Khashoggi]," he said, adding that a small human tissue left behind could be sufficient for Turkish investigators to detect a murder at the premises through DNA identification. He said surveillance cameras would be helpful if the police investigate the movements of people involved in possible murder. "You can detect if people in question are anxious while leaving the building and if the weight of any luggage they carry changed," he said.

Khashoggi, once close to the royal family, left for the United States for a self-imposed exile after he raised criticism of Riyadh's policies on a number of issues. He was critical of arbitrary detentions in his home country and is believed to angered Saudi Arabia's Crown Prince Muhammad bin Salman (also widely known as MBS). The Washington Post, where Khashoggi penned columns, claimed MBS ordered an operation targeting him, citing U.S. intelligence intercepts.

The Saudi journalist was at the consulate for paperwork required for his upcoming marriage to his Turkish fiancee Hatice Cengiz. Cengiz was the last acquaintance to see him alive and alerted authorities when Khashoggi did not emerge from the consulate long after the building was closed.

"People who have long thought of themselves as Saudi's friends are saying this is a very, very serious matter. If these allegations are true, there will be serious consequences because our friendships and our partnerships are based on shared values," he said, adding that they were "extremely worried." Hunt said he had spoken to Saudi Foreign Minister Adel al-Jubeir and had told him "how very, very concerned the United Kingdom is."