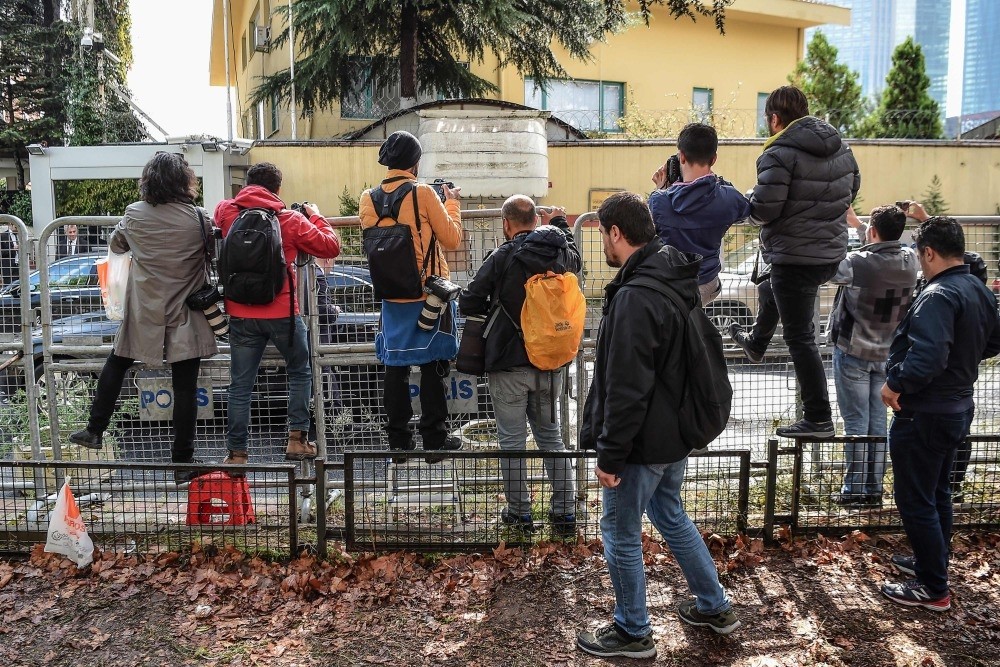 Journalists stand in front of the Saudi Arabian consulate in Istanbul. Jamal Khashoggi, a Saudi Washington Post contributor, vanished on Oct. 2 after entering the consulate to obtain official documents ahead of his marriage to his Turkish fiancee.
by Daily Sabah with Wires
Oct 13, 2018 12:00 am

European countries and the U.S. have increased the pressure on Saudi authorities to reveal what they know about Jamal Khashoggi, who has been missing since Oct. 2, after entering the country's consulate in Istanbul.

"The disappearance of Jamal Khashoggi in Istanbul... has raised serious questions about his fate. France asks that the facts be clearly established and that all those who can contribute to the truth fully contribute to it," French Foreign ministry spokeswoman Agnes Von der Muhll said in a statement Friday.

German Chancellor Angela Merkel's spokesman Steffen Seibert said: "The German government is seriously concerned over Khashoggi's disappearance without a trace, and sweeping suspicions [on the disappearance] are horrifying." Seibert said a prompt and extensive investigation should clarify the journalist's disappearance.

Meanwhile, U.S. President Donald Trump said he's talked to officials at the highest level of the Saudi kingdom and is "demanding everything" to explain how Khashoggi, an activist who had been critical of Saudi leaders, vanished after he walked into the consulate in Istanbul to get documents he needed to get married. Trump said Friday that he would call Saudi Arabia's King Salman soon to raise the issue of Khashoggi's disappearance.

According to the Associated Press, Sen. Lindsey Graham, a Trump supporter and top member of the Senate Foreign Relations Committee, said: "We want to have a relationship with Saudi Arabia. They're a strategic partner. They're a mortal enemy of the Iranians. They're helping us on terrorism." But added, "Having said all that, if this did happen - and it's increasingly likely that something bad happened to this man at the hands of the Saudi government - that shows contempt for us. That's disrespectful to us. It puts people like me in a box who've been one of the leading champions of the relationship."

While there has been no official statement about what Turkish authorities believe happened to Khashoggi, some local officials have talked to reporters off the record. According to a report by the Washington Post, Turkish officials told that American counterparts that they have audio and video evidence pointing to Saudis killing and dismembering the journalist. The newspaper, for which Khashoggi is a columnist, cited anonymous officials as saying the recordings show a Saudi security team detained the writer when he went to the consulate on Oct. 2 to pick up a document for his upcoming wedding.

Meanwhile, Saudi Arabia has called the allegation it abducted or harmed Khashoggi "baseless." However, it has offered no evidence to support its claim he left the consulate and vanished despite his fiance waiting outside.

President Recep Tayyip Erdoğan called on Riyadh to prove Khashoggi left, challenging Saudi Arabia to provide CCTV images to back up its account. Officers were looking into sound recordings sent from a smartwatch that Khashoggi was wearing when he was inside the consulate to a mobile phone which he gave to his Turkish fiancee waiting outside, Hatice Cengiz.

On Thursday, Turkish Presidential Spokesman İbrahim Kalın said Turkey and Saudi Arabia would form a "joint working group" to look into Khashoggi's disappearance. Turkish diplomatic sources told Agence France-Presse (AFP) and the Anadolu Agency (AA) that a Saudi Arabian delegation had arrived in capital Ankara on Friday and would be holding talks with Turkish officials at the weekend. Kalın on Thursday said that a joint working group would be set up to solve the mystery over the disappearance.

Turkey and Saudi Arabia are also at odds over a planned search by the Turkish authorities at the Istanbul consulate. Riyadh agreed on Tuesday to let Turkish authorities search the Saudi mission as part of the investigation into the disappearance of Khashoggi. But the search has not yet taken place. The Turkish-language daily newspaper, Sabah said this was because Saudi officials would only allow a superficial "visual" probe. The Turkish side did not accept the offer and Sabah said officials wanted to search the building with luminol, a chemical that allows for the discovery of blood traces.