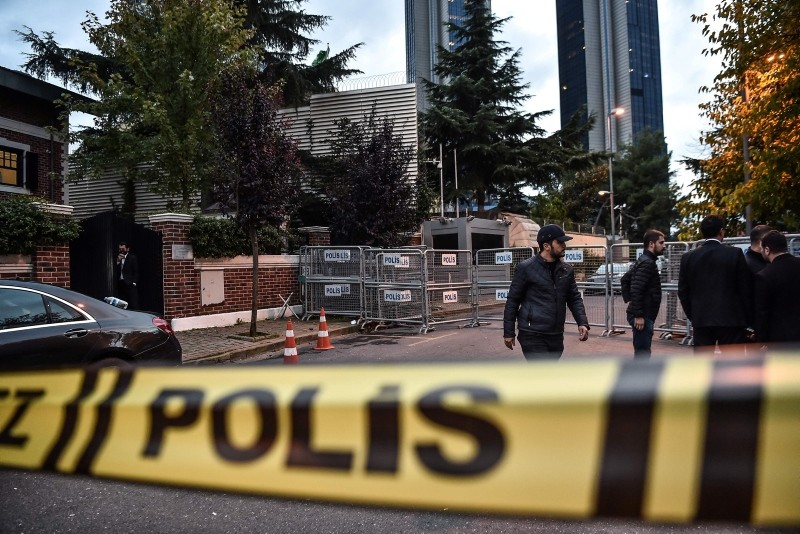 The Saudi Arabia's consulate is cordoned off by Turkish police in Istanbul on October 15, 2018 during the investigation over missing Saudi journalist Jamal Khashoggi. (AFP Photo)
by Daily Sabah Oct 17, 2018 12:00 am

Turkish police have identified five suspects – four of whom have ties to the Saudi crown prince – in the investigation launched into the disappearance and alleged murder of prominent journalist Jamal Khashoggi, according to a U.S. media report.

One of the suspects, Maher Abdulaziz Mutreb, has close ties to Crown Prince Mohammad bin Salman, as photographs show him disembarking from airplanes with the crown prince in Madrid and Paris, according to the The New York Times. The suspect was also photographed next to the crown prince on visits to the U.N. and U.S.

A second suspect, Abdulaziz Mohammed al-Hawsawi, is reportedly a member of the crown prince's security detail as cited by a French professional who had previously worked with the royal family.

Thaar Ghaleb al-Barbi, a third suspect, is a high-ranking Saudi royal guard, promoted to the position for his valor in the defense of the crown prince's quarters in Jeddah, Saudi media reported.

The final suspect, Dr. Salah al-Tubaigy, the head of Forensic Evidence at the Saudi General Security Department who traveled to Istanbul on a Saudi expedition, is allegedly responsible for dismembering Khashoggi in the Saudi consul's Istanbul residence.

The New York Times echoed reports that Turkish authorities have successfully identified at least nine out of 15 suspects who have ties to Saudi's military, government or security services. The report stated that the suspects were transferred on private jets by a Saudi company that has direct links to the crown prince and Saudi's Interior Ministry.

A Turkish official reportedly said late Tuesday that Washington Post journalist and Riyadh critic Khashoggi was drugged, murdered and his body was cut into pieces after he visited the Saudi consulate in Istanbul on Oct. 2.

A Turkish investigator team and prosecutors conducted a nine-hour search in Saudi Arabia's consulate in Istanbul and will search Wednesday the residence of the Saudi consul, who returned to his country on Tuesday.

Dissident journalist Khashoggi, has been missing since Oct. 2 after entering the Saudi consulate to gather documents for marriage.

Khashoggi, who was considered close to the Saudi royal family, had become a critic of the current government and Crown Prince bin Salman, the 33-year-old heir apparent who has shown little tolerance for criticism.