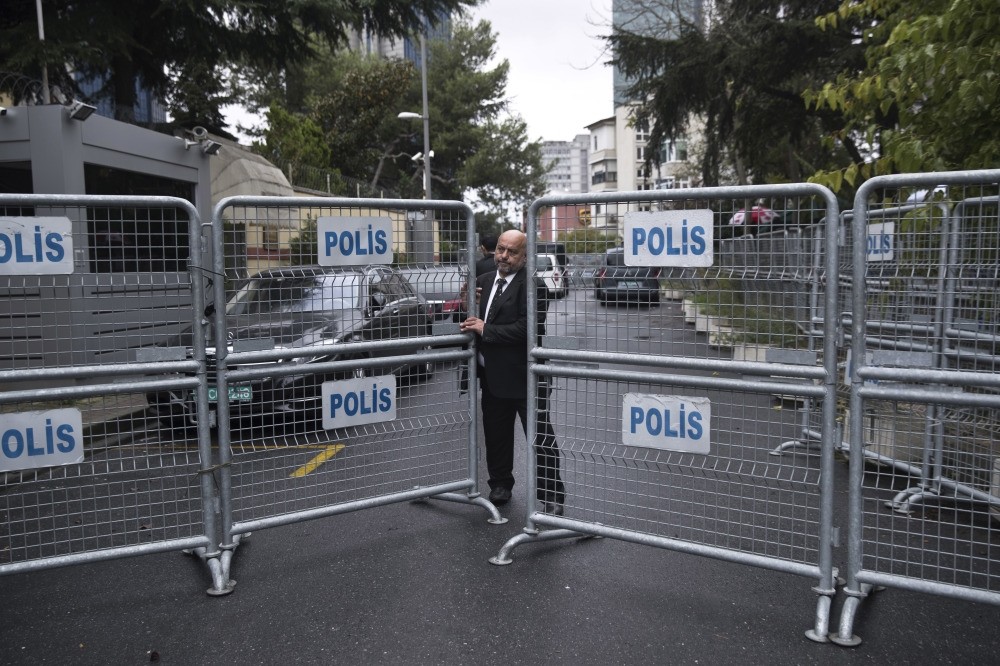 A guard secures the entrance to the Saudi Consulate in Istanbul. A Turkish newspaper yesterday published a gruesome recounting of the slaying of Saudi writer Jamal Khashoggi at the consulate.
by daily sabah
Oct 18, 2018 12:00 am

As Saudi Arabia runs out of excuses behind the disappearance of Jamal Khashoggi and as further ghastly details emerge, Turkish investigators begin the search of the consul general's residence in Istanbul to find further proof that the journalist was murdered

Forensic experts and other members of law enforcement moved into the residence of the Saudi consul general to what many consider the last step in finding definitive evidence linking Saudi officials directly to the suspected murder and dismembering of journalist Jamal Khashoggi earlier this month. Consul General Mohammad al-Otaibil unexpectedly left the country late on Tuesday. Reports claimed he witnessed the torture and murder of the journalist. An 11-member Saudi investigation team had arrived at the Saudi consul's Istanbul residence earlier in the day. Foreign Minister Mevlüt Çavuşoğlu, speaking to journalists yesterday after a meeting by U.S. Secretary of State Mike Pompeo and President Recep Tayyip Erdoğan, said the search would include vehicles belonging to the consulate.

Pompeo stopped by in Ankara after visiting Saudi Arabia to meet King Salman and Crown Prince Mohammad bin Salman. "Pompeo told us he communicated President Donald Trump's messages and called for an answer to the mystery behind Khashoggi's disappearance," Çavuşoğlu said. About the consul general's surprise departure, the foreign minister said it was not his job to keep tabs on diplomats but some of his actions, especially opening up the consulate to Reuters to show Khashoggi was not there, were disrespectful and had attracted criticism.

Khashoggi, a Saudi citizen who was also a resident of the United States, has been a contributor to The Washington Post and a critic of Saudi leaders, especially the crown prince. Khashoggi, 59, had been living in the U.S. for a year in self-imposed exile and writing columns for the opinion section of the Post.

Pompeo, the U.S. State Department stated yesterday, had told Erdoğan that the U.S. was ready to help in the investigation. Speaking later yesterday after leaving Turkey, Pompeo said America is taking the Khashoggi case "seriously." Asked if he heard or asked to hear audio of Khashoggi's alleged slaying, he said: "I don't have anything to say about that." Pompeo stressed that the U.S. and Saudi Arabia have important links, including working on countering Iran. However, he said: "If a country engages in activity that is unlawful, it's unacceptable. No one is going to defend activity of that nature. They need to simply say what happened."

CNN reported on Tuesday that the Saudis were going to admit the killing happened but deny the king or crown prince had ordered it - which does not match what analysts and experts know about the kingdom's inner workings.

Crime scene investigators carried out a nine-hour search of the consulate on Monday night in an investigation to look into what happened to Khashoggi, who was last seen entering the Saudi consulate on Oct. 2.

A high-level Turkish official told The Associated Press on Tuesday that police investigators searching the Saudi Consulate had found evidence that Khashoggi was killed there.

The transcript of the much-reported but, up till yesterday, unreleased audio recording of the murder of journalist Jamal Khashoggi was released by a Turkish newspaper yesterday, which produced gruesome details about the torture and killing of the critic at Saudi Arabia's Istanbul consulate in the presence of Consul-General Otaibil, who returned to his country the day before.

According to Yeni Şafak's report, the assassination squad first cut off Khashoggi's fingers before murdering him. He was later by decapitated. Reportedly, the consul general was worried about what was taking place at the consulate and feared its repercussions for himself, asking the members of the squad what they were doing outside. One of the torturers threatened him to be "quiet if you want to live when you return to [Saudi] Arabia."

There are also reports that once the journalist was killed, it took the forensic expert among the squad only seven minutes to cut up Khashoggi. The forensic expert said putting on headphones and listening to music made the job of dismembering the body easier and advised the others in the room to do the same.

TRUMP TAKES ON ALL FOR SAUDIS

Despite what his state secretary said, Trump continues to defend the innocence of Saudi officials despite mounting evidence. Speaking to The Associated Press, he said, "I think we have to find out what happened first. Here we go again with, you know, you're guilty until proven innocent. I don't like that. We just went through that with Justice [Brett] Kavanaugh and he was innocent all the way as far as I'm concerned."

His remarks put him at odds with other key allies and with some leaders in his Republican Party who have condemned the Saudi leadership for what they say is an obvious role in the case. Trump appeared willing to resist the pressure to follow suit, accepting Saudi denials and their pledge to investigate.

Earlier on Tuesday, U.S. Secretary of State Pompeo met with the king and crown prince in Riyadh and said the Saudis had already started a "serious and credible investigation" and seemed to suggest it could lead to people within the kingdom.

He noted that the Saudi leaders, while denying knowledge of anything that occurred inside the consulate, had committed to accountability "including for Saudi Arabia's senior leaders or senior officials."

In an interview with Fox News, a prominent Trump ally in the Senate called on Saudi Arabia to reject the crown prince, widely known as MBS, who rose to power last year and has aggressively sought to soften the kingdom's image abroad and attract foreign investment.

"This guy has got to go," said Sen. Lindsey Graham of South Carolina, turning to speak to the camera. "Saudi Arabia, if you're listening, there are a lot of good people you can choose, but MBS has tainted your country and tainted himself."