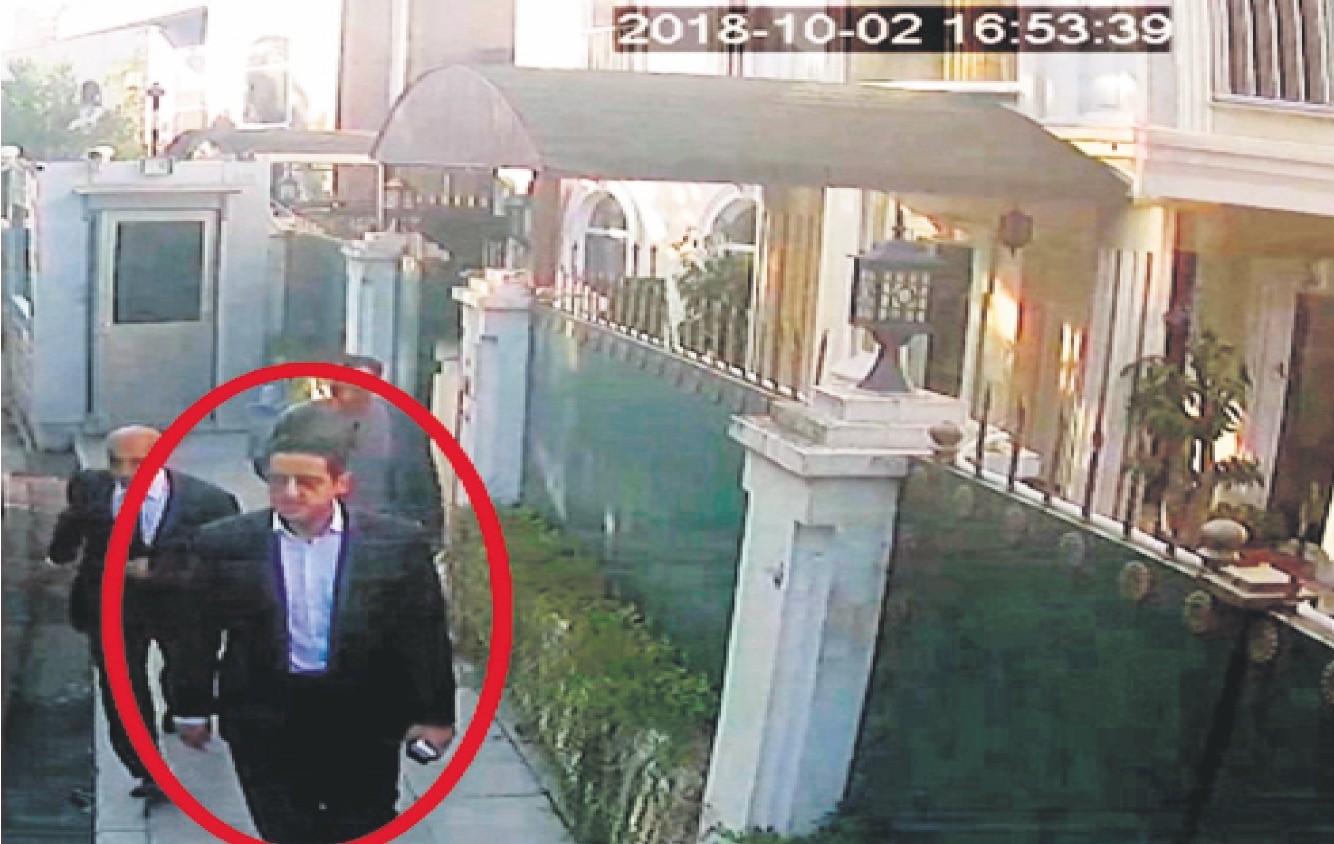 In a still image from surveillance camera, Maher Abdulaziz Mutreb previously seen with Saudi Crown Prince Mohammed bin Salmanu2019s entourage during an April trip to the U.S. walks outside the Saudi consul generalu2019s residence in Istanbul.
by daily sabah
Oct 19, 2018 12:00 am

Turkish law enforcement authorities have expanded their search for missing Saudi journalist Jamal Khashoggi to include a forest in Istanbul and a nearby province, showing that almost no one believes Khashoggi is still alive

Law enforcement authorities have expanded their search for Saudi journalist Jamal Khashoggi to a forest in Istanbul and the province of Yalova across the Marmara Sea, making it clear that their efforts are no longer to locate the journalist but rather his remains. Video footage collected by police from around the Saudi Consulate has shown that of the 26 vehicles that exited the compound on Oct. 2, the day Khashoggi went missing, most came back, apart from the two that were carrying the members of the 15-strong assassination squad. Investigations have shown that one went to Belgrad Forest, located in the northern edge of the European side of the Bosporus Strait, and the province of Yalova.

Police officers searched the forest yesterday and collected footage from cameras located in the area, while officers in Yalova's Termal region are said to have been quite busy for the last three days. İhlas News Agency cited locals saying the same minivan had been seen in the region several times, with officers focusing on the possibility of one member of the assassination squad having a summer house in the region. Thermal springs have become a major source of revenue in Termal, Yalova, with a large number of Arabs having purchased properties in the region.

The widening of the investigation came only a few hours after Turkish crime scene investigators finished a nine-hour overnight search of both the consul general's residence and a second search of the consulate itself.

The Istanbul Chief Public Prosecutor's Office, which is running the investigation, released a statement yesterday underlining that their investigations were complying with all relevant international and national norms. "Turkey has followed the law and international agreements and has taken 'open and transparent actions' in the Khashoggi case," Interior Minister Süleyman Soylu told Anadolu Angency (AA) yesterday.

Saudi security official Maher Abdulaziz Mutreb was the leader of the alleged team. He has previously been photographed close to the crown prince.

The Sabah report showed the man walking past police barricades at the consulate at 9:55 a.m. with several men trailing behind him. Khashoggi arrived at the consulate several hours later at 1:14 p.m., then disappeared while his fiancee waited for him outside.

"Here is the head of the execution team," said Sabah's headline, and the paper then detailed Mutreb's movements on the day Khashoggi went missing.

Giving precise times based on closed-circuit TV footage, the newspaper reported that Mutreb went into the consulate more than three hours before Khashoggi entered the building. In a series images from the footage, Mutreb was then seen outside the consul's residence, then later at his hotel near the Saudi mission with a "large suitcase" and finally at the airport in the early evening.

Previously leaked surveillance footage showed consular vehicles moving from the consulate to the consul general's official residence, some 2 kilometers away, a little under two hours after Khashoggi walked inside. Sabah newspaper showed an image of the man at 4:53 p.m. at the consul's home, then at 5:15 p.m. checking out of a hotel. He later cleared airport security at 5:58 p.m.

Images shot by the Houston Chronicle and later distributed by The Associated Press show the same man in Crown Prince Mohammed's entourage when he visited a Houston subdivision in April to see rebuilding efforts after Hurricane Harvey. The same man wore lapel pins, including one of the flags of Saudi Arabia and America intertwined, that other bodyguards accompanying the crown prince wore on the trip.

Flying back home after a visit to both Saudi Arabia and Turkey, U.S. Secretary of State Mike Pompeo remained positive Wednesday about an ongoing Saudi probe into Khashoggi's disappearance, but he stressed that answers are needed. "Sooner's better than later for everyone," Pompeo said. Meanwhile, Axios claimed that Pompeo told Saudi Crown Prince Mohammed bin Salman during their meeting on Tuesday that he had 72 hours to complete his "investigation" or risk wrecking the kingdom's place on the world stage.

Also yesterday, the Washington Post published what it described as Khashoggi's last column in honor of the missing journalist.

In his column, Khashoggi criticized the international community for ignoring the ongoing abuses by governments in the Middle East. He added, "The Arab world is facing its own version of an Iron Curtain, imposed not by external actors but through domestic forces vying for power."

Meanwhile, international pressure to punish Saudi Arabia is getting more intense by the day, with U.S. and German governments calling to cease exporting weapons to the kingdom, while more and more top officials and businessmen are announcing their intention not to attend next week's investors' conference in Saudi Arabia.

Meanwhile, the Human Rights Watch held a press conference at the United Nations headquarters in New York yesterday, calling for an international investigation. HRW officials dismissed the ongoing Saudi investigation and accused the kingdom of having "blood on its hands."