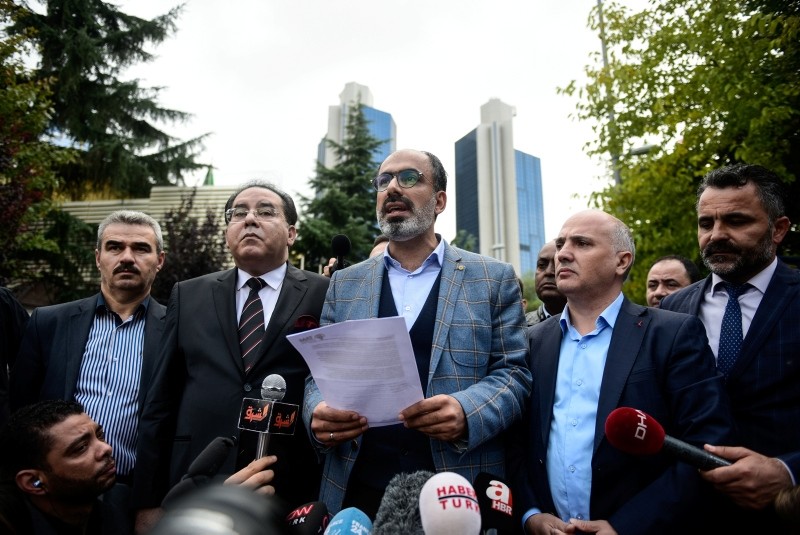 Head of the Turkish - Arab Media Association Turan Kislakci (C) speaks to media in front of the Saudi Arabian consulate in Istanbul, October 20, 2018. (DHA Photo)
by Compiled from Wire Services
Oct 20, 2018 12:00 am

An Istanbul-based journalists' group on Saturday demanded punishment for those who ordered the killing of Jamal Khashoggi at the Saudi Arabian consulate.

"We demand that not only the 18 men but those who commanded (the killing) are punished," said Turan Kışlakçı, head of the Turkish-Arab Media Association (TAM), of which Khashoggi was a member.

Speaking outside the Saudi consulate in Istanbul, where Khashoggi vanished after entering the building on Oct. 2, Kışlakçı said he was "slaughtered by bloody murderers" and that his group wants "true justice" for its slain colleague.

Saudi Arabia admitted on Friday that the journalist, a Washington Post contributor and Riyadh critic, died during a "brawl" inside its Istanbul consulate -- after persistent claims that he left the consulate alive on October 2.

Riyadh announced the arrest of 18 Saudis and the sacking of two top aides of Crown Prince Mohammed bin Salman, who has faced mounting international pressure over Khashoggi's disappearance.

Turkish police and prosecutors searched this week both the consulate and the consul's residence in Istanbul. But it remains unclear where the journalist's body is.

"There's only one thing that matters right now. Give Jamal back to us. Give him back so that we can hold his funeral," Kışlakçı said.

"Let the whole world watch the funeral of Jamal Khashoggi, who was killed in a dark room in a horrific manner."

Some media outlets claimed there were audio tapes in which Khashoggi's alleged killers tortured him by cutting his fingers off before his decapitation.