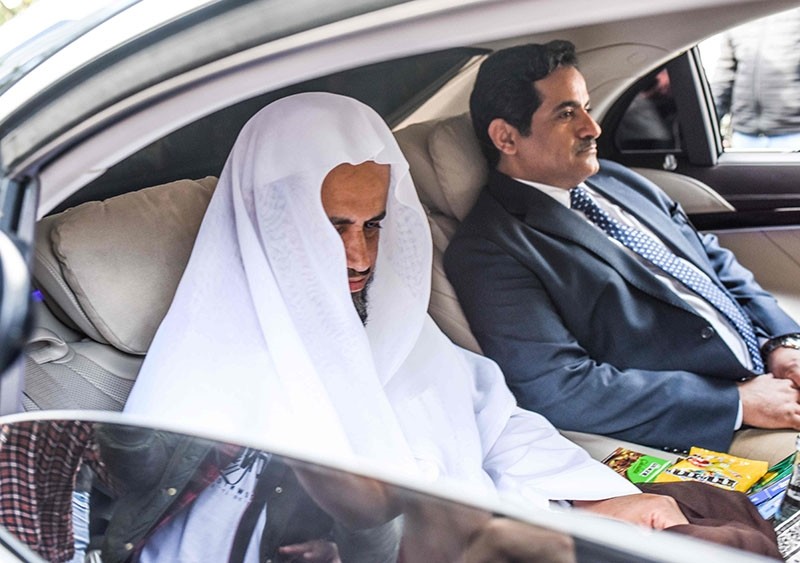 The head of the Saudi investigation into the murder of journalist Jamal Khashoggi, Attorney General Sheikh Saud al-Mojeb (L) leaves the Saudi-Arabian consulate by car in Istanbul on Oct. 30, 2018. (AFP Photo)
by Daily Sabah with Agencies
Oct 31, 2018 12:00 am

Saudi journalist Jamal Khashoggi was strangled to death as soon as he entered Saudi Arabia's Istanbul consulate and his body was then dismembered and disposed of in accordance with plans drawn earlier, the Istanbul Chief Public Prosecutor's Office said Wednesday.

The announcement came as Saudi Arabia's chief public prosecutor, Saud al-Mojeb, on Wednesday completed inspections related to the killing of Khashoggi in Turkey. Al-Mojeb arrived in Istanbul early Monday to discuss the investigation with Istanbul Chief Public Prosecutor İrfan Fidan and members of the Turkish intelligence agency. He was headed to Istanbul's Atatürk Airport on Wednesday afternoon after a three-day visit.

"In accordance with plans made in advance, the victim, Jamal Khashoggi, was choked to death immediately after entering the Consulate General of Saudi Arabia in Istanbul on Oct. 2, 2018 for marriage formalities," the statement said.

"The victim's body was dismembered and destroyed following his death by suffocation – again, in line with advance plans," the statement added.

Several questions previously posed by President Recep Tayyip Erdoğan related to the case were also reiterated by the statement.

The statement said that al-Mojeb and the accompanying delegation were asked where Khashoggi's body was, if there was any evidence reached by Saudi authorities on premeditated plans for the killing, and who the local accomplice mentioned by Saudi officials was. The prosecutor's office reiterated Turkey's request for extradition of suspects arrested by Saudi Arabia in Khashoggi case given that the crime scene was in Turkey and Turkish officials are authorized to conduct the investigation.

In a written reply, Saudi officials invited Fidan and an accompanying delegation to Saudi Arabia along with evidence on the issue for further talks, saying that the body could only be located in a joint investigation in Saudi Arabia along with possible plans to murder Khashoggi, the statement said. The Saudi side's reply also rejected that there was a statement about a local accomplice from Turkey.

The statement added that no concrete results were reached during meetings with the Saudi attorney general despite good intentions, and there was an obligation to reveal the prosecutor's office's findings on the investigation given the severity of the action.

Al-Mojeb reportedly met again with officials at the regional head offices of the National Intelligence Organization (MIT) on Tuesday night after visiting the Saudi consulate in Istanbul earlier in the day. Mojeb previously went to the residence of Saudi Consul General Mohammed al-Otaibi for the investigation.

A report by Turkish daily Hürriyet said the Saudi prosecutor had not shared any information, including the testimonies of the 18 people arrested, with Turkish authorities during his visit. The report also said al-Mojeb was seeking Khashoggi's phone, which the journalist gave to his Turkish fiancee before entering the consulate.

Speaking to Agence France-Presse (AFP), a senior Turkish official said yesterday that Saudi Arabian officials have appeared unwilling to genuinely cooperate with Turkey's investigation into the murder. The official also underscored that Saudis seemed primarily interested in finding out what evidence the Turkish authorities had against the perpetrators.

Al-Jazeera reported that the MIT refused to provide recordings and evidence on the case to al-Mojeb.

Speaking after the meeting between Fidan and al-Mojeb, Foreign Minister Mevlüt Çavuşoğlu called on Saudi Arabia to reveal the "whole truth" about the killing.

"This is our concern. This investigation should be concluded as soon as possible," Çavuşoğlu said, adding that the whole world was waiting for the outcome.

The case has brought near unprecedented international scrutiny on Saudi Arabia and its powerful Crown Prince Mohammad bin Salman, whom Khashoggi had criticized.

After weeks of shifting official narratives, Saudi Arabia has said the journalist was killed by a "rogue operation" and arrested 18 people allegedly connected to his death.

Al-Mojeb was the first Saudi official to acknowledge that the killing was "premeditated" based on the results of Turkey's investigation.

On the same day of Khashoggi's disappearance, 15 other Saudis, many of them Saudi intelligence operatives, arrived in Istanbul and visited the consulate at the same time of the disappearance. All of the identified individuals have since left Turkey and were later arrested by Saudi authorities.

On Tuesday, U.N. High Commissioner for Human Rights Michelle Bachelet called on Saudi authorities to immediately reveal the whereabouts of Khashoggi's body. She also urged international experts to be employed in the investigation with full access to evidence and witnesses to prevent distortion of the matter by possible political intervention.

Underscoring that authorities should shed light on the matter and the culprits should pay the price, Bachelet added, "Given the information that high-level officials in Saudi Arabia were apparently involved, and it took place in the Consulate of Saudi Arabia, the bar must be set very high to ensure meaningful accountability and justice for such a shockingly brazen crime against a journalist and government critic."

Meanwhile, global reactions against Riyadh over the killing continue to mount, as the EU reiterated its call for a "transparent and credible" investigation to bring the culprits to justice.

EU Foreign Policy Chief Federica Mogherini Wednesday stressed that they hoped Saudi Arabia would cooperate with the investigation and reveal the full truth about the matter so those responsible could be punished.

France Foreign Minister Jean-Yves Le Drian, on the other hand, said yesterday that, "We'll take the necessary measures against those who are responsible," adding that the investigation is progressing thanks to the pressure from Turkey and other countries.

Commenting on the likely sanctions, Le Drian highlighted that they will not rule out anything, including sanctions, in coordination with their European partners until the investigation finds the culprits.

German Chancellor Angela Merkel previously vowed to halt arms sale to Riyadh and urged other EU countries to do the same. The U.K. and the U.S. also began to revoke visas of the individuals suspected of having been involved in Khashoggi's killing, despite President Donald Trump's unwillingness to cancel Washington's arms sales due to economic concerns.