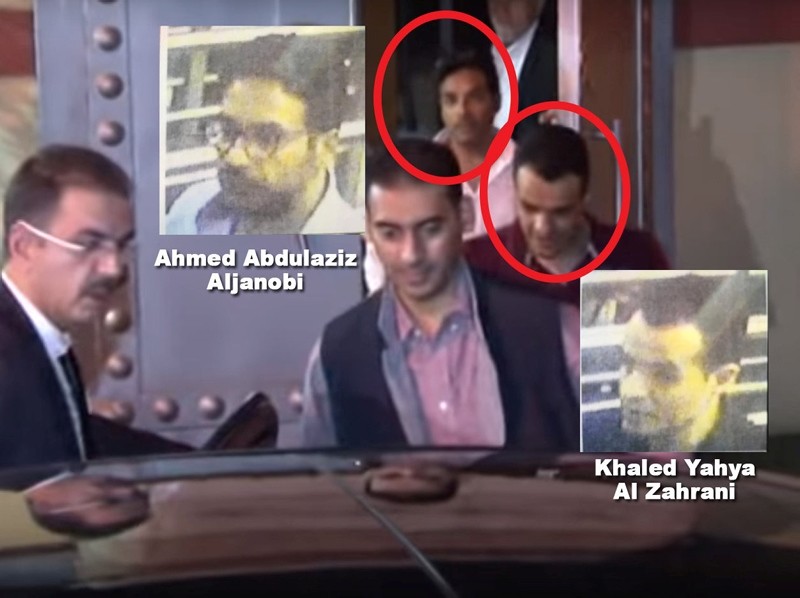 Saudi authorities sent a chemist and toxicologist to Istanbul nine days after the gruesome murder of journalist Jamal Khashoggi to get rid of his body and hide the evidence, Turkish newspaper Sabah reported Monday.

The report said chemist Ahmed Abdulaziz Aljanobi and toxicologist Khaled Yahya Al Zahrani were a part of the 11-member Saudi team that arrived in Istanbul on Oct. 11, according to "reliable sources." The newspaper alleged that while the Saudi team's declared intent was to investigate the murder, it actually intended to cover-up the deed.

Aljanobi and Zahrani, who were staying at a luxury hotel in Beşiktaş district, went to the Saudi consulate in Istanbul – where Khashoggi was killed on Oct. 2 after he entered to collect a document he needed to marry his Turkish fiancée Hatice Cengiz – every day for a full week.

The two "wipers" went to the consulate every day from Oct. 12 to Oct. 17, leaving Turkey on Oct. 20, the newspaper said.

Turkish police units were given permission by Saudi authorities to search the consulate on Oct. 15 and 16, and searched the residence of Consul General Mohammad al-Otaibi on Oct. 17.

An official cited by Sabah said the fact that a clean-up team was dispatched suggests that Khashoggi's killing "was within the knowledge of top Saudi officials." The official spoke on condition of anonymity, in line with government rules.

The report also cited Turkish experts who suggested the claim that acid was used to eliminate Khashoggi's body or render it unidentifiable is likely.

"We believe that the two individuals came to Turkey for the sole purpose of covering up evidence of Jamal Khashoggi's murder before Turkish police were allowed to search the premises," the official was quoted by Agence France-Presse (AFP) Monday on condition of anonymity.

"The fact that a clean-up team was dispatched from Saudi Arabia nine days after the murder suggests that Khashoggi's slaying was within the knowledge of top Saudi officials," added the official, according to AFP report.

Vice President Fuat Oktay said Monday that reports of acid being used to get rid of Khashoggi's body need to be investigated.

"Turkey approaches the Khashoggi killing with transparency and in a serious manner," Oktay said, adding that Turkish authorities are now seeking the person who ordered the killing on Turkish soil.

Istanbul's Chief Public Prosecutor Irfan Fidan, who is leading the investigation, announced last week that Khashoggi, who lived in exile in the United States, was strangled immediately after he entered the consulate as part of a premeditated killing and that his body was dismembered before being removed.

President Recep Tayyip Erdoğan said in an op-ed in the Washington Post last week that the order to kill Khashoggi came from the highest level of the Saudi government and added that the international community had the responsibility to "reveal the puppet masters" behind the slaying.

Turkey is seeking the extradition of 18 suspects who were detained in Saudi Arabia so they can be put on trial in Turkey. They include 15 members of an alleged Saudi "hit squad" that was sent to Istanbul to kill the Washington Post columnist who had written critically of Saudi Arabia's Crown Prince Mohammed bin Salman.

A Saudi diplomat told the U.N. Human Rights Council on Monday that the kingdom's prosecutors are investigating Khashoggi's death and will prosecute the perpetrators.

"The leadership in the kingdom expressed their pain for the murder of citizen Jamal Khashoggi," Bandar al-Aiban, the head of Saudi Arabia's Human Rights Commission, said in Geneva.

As per instructions by King Salman, Saudi "prosecutors started investigations in the case to reach all truths and present all defendants to justice and sentence those proven guilty of this crime," al-Aiban added.

Meanwhile, two of Khashoggi's sons appealed Monday for his remains to be returned so that he may be buried in Medina, Saudi Arabia.