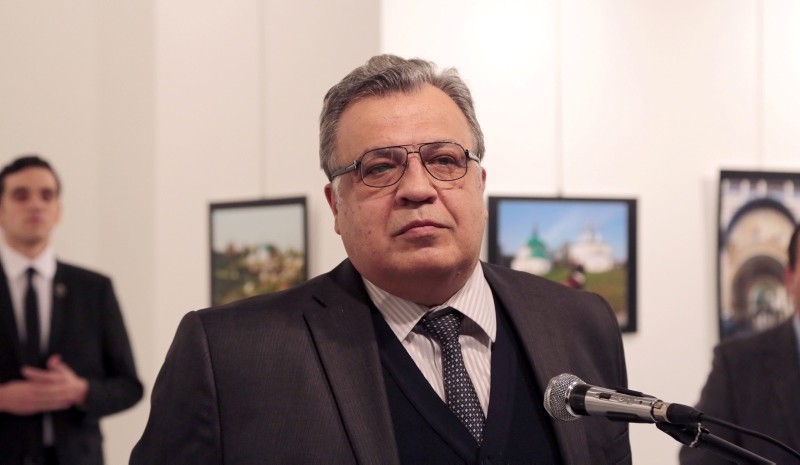 This file photo shows Andrei Karlov, late Russian ambassador to Turkey, speaking at a gallery in Ankara on Dec. 19, 2016, shortly before a gunman, seen at the rear on the left and posing as a bodyguard, shot him dead. (AP Photo)
by Yüksel Temel Nov 15, 2018 12:00 am

An indictment on the murder of Russian Ambassador to Turkey Andrey Karlov was wrapped up and Gülenist Terror Group (FETÖ) and its leader Fetullah Gülen are the prime suspects in the case.

Karlov was killed on Dec. 19, 2016 by Mevlüt Mert Altıntaş, an off-duty police officer with links to FETÖ, in an art gallery in the capital Ankara. Prosecutors indicted 28 people in the murder and apart from Gülen, Şerif Ali Tekalan and Emre Uslu are prominent figures from FETÖ included in the indictment.

Prosecutors say FETÖ sought to derail Turkish-Russian relations with the murder. The assassination was at a time of thaw between strained Turkish and Russian relations. Since the murder, Ankara and Moscow gradually made progress in rebuilding their ties that were disrupted by the 2015 downing of a Russian fighter jet over the Syrian border by the Turkish military.

Altıntaş was killed in a shootout with police in the gallery after the assassination. The indictment by the Chief Public Prosecutor's Office in Ankara detailed his connections to FETÖ, including Şahin Söğüt, an arrested member of the group who is accused of being a "big brother" or handler for Altıntaş on behalf of FETÖ. It was Söğüt who instructed Altıntaş to carry out the murder, according to investigators.

Security forces have also arrested Timur Özkan, the curator of the exhibition Karlov was attending at the art gallery when he was murdered and Hayreddin Aydınbaş, the owner of a media company, for their links to FETÖ and the murder. Nine others including four police officers were also arrested over the murder.

The indictment accuses suspects of "violating the constitution" – a terror charge – and homicide. It includes digital evidence showing Altıntaş's connections to FETÖ. The evidence shows Şahin Söğüt met Altıntaş 10 days before the assassination and the same day, Altıntaş did online research about Russia. Other evidence shows connections between Özkan and Şerif Ali Tekalan, a fugitive senior FETÖ member who is currently serving as a president of a U.S. university run by the terrorist group. Tekalan and Özkan had financial ties according to prosecutors.

Emre Uslu, a journalist who fled to the United States after arrest warrant was issued by Turkey in a separate case, is accused of distracting suspicion from FETÖ's role in the murder on social media.