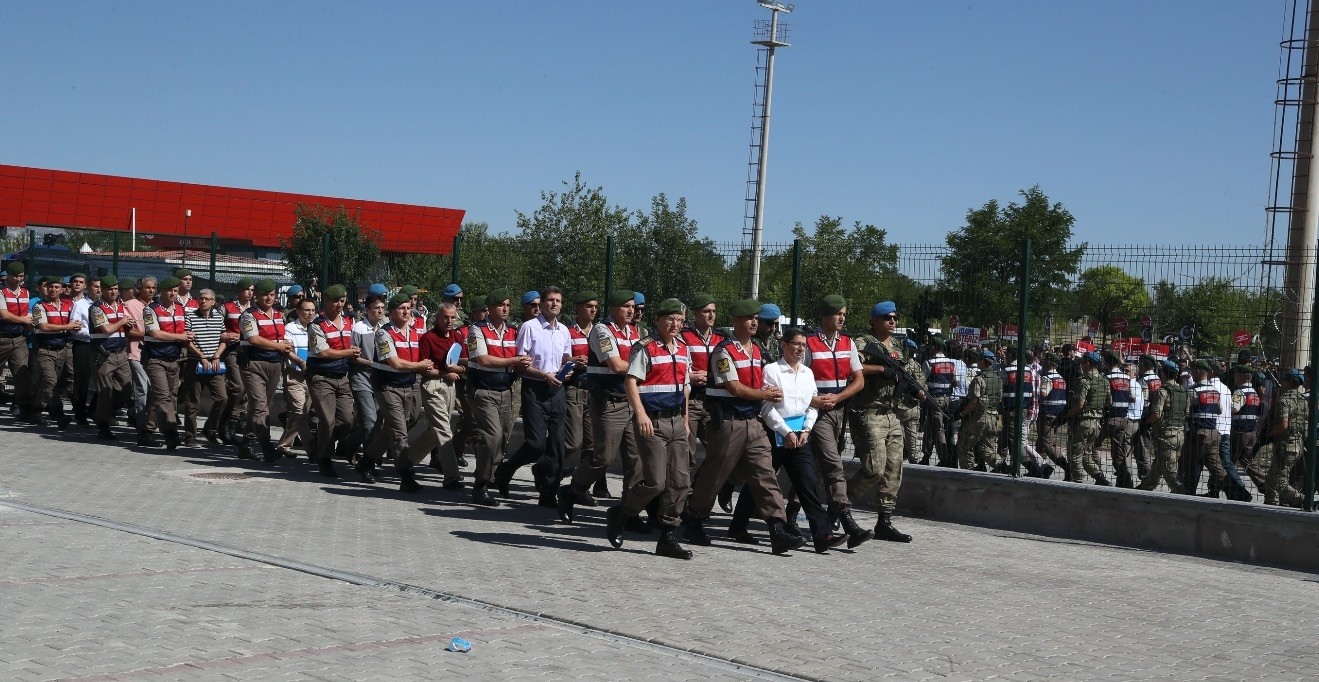 Sodliers escort defendants to the courthouse in Ankara for the takeover of Aku0131ncu0131 air base trial in the first hearing of the case last year.
by Daily Sabah Dec 03, 2018 12:00 am

Save for a few, most trials on the brutal coup attempt by infiltrators of the FETÖ terrorist group in the army are expected to wrap up by the end of the year. More than 3,000 are currently on trial for the attempt and membership of the terrorist group

It is beginning of the end in the trials concerning the July 15, 2016 coup attempt orchestrated by the Gülenist Terror Group (FETÖ). Most trials regarding the putsch bid that killed 251 people are set to conclude this month, except for a few with a large number of defendants. Some 3,876 defendants are on trial in 13 cities in 44 trials concerning the coup attempt and other wrongdoings by the terrorist group that emerged as a threat to reckon with in the past five years. In September, Justice Minister Abdülhamit Gül announced that they expected most trials dealing with the attempt to wrap up by the end of this year, describing the process "a success for the Turkish judiciary" thanks to its "swiftness."

Still, crackdowns on FETÖ's infiltrators in the military still continue, with dozens being detained or arrested on a weekly basis.

There are currently 13 large-scale trials about the coup attempt in the capital Ankara, Istanbul, İzmir and Hakkari and another 31 trials in 12 cities focusing on FETÖ. In coup trials, 2,451 defendants will appear before courts and 1,425 others in FETÖ-related cases.

Hearings in Ankara that adjourned last week will resume today in cases concerning the takeover of Akıncı air base, the general command of the Gendarmerie Forces, Land Forces Command, a helicopter unit based in Ankara and a military school for Land Forces. On Dec. 11, a new hearing will be held for the takeover of a military school and a police station in Istanbul during which anti-coup heroes bravely stood against putschists at the cost of their lives.

Thousands of people were arrested or detained in the aftermath of the coup attempt. Authorities say infiltrators of FETÖ in the military carried out the coup attempt perpetrated by a group of high-ranking military officers calling themselves the Peace At Home Council. Ankara says the council, instructed by FETÖ leader Fetullah Gülen, planned the coup attempt at a meeting with Adil Öksüz, the fugitive mastermind of the attempt. Öksüz is a point man for Gülen, who is believed to still control a large number of military infiltrators.Defendants in coup cases, mostly those caught red-handed, stuck to denials in their hearings, blaming others for their actions on July 15. Some even claimed it was not them in security camera footage openly showing them attacking anti-coup military officers, much to the chagrin of families of victims watching the trials. Legal experts say that the defendants are seeking to prolong trials as FETÖ keeps their jailed followers' hopes high for the possibility of release through messages by Gülen, who lives in Pennsylvania in the United States.

FETÖ planted its men and women in every institution - from the army to law enforcement - for decades before it openly declared war against the state with two coup attempts in 2013. Disguised with code names, secretive correspondences and a distinct secular lifestyle worlds away from what FETÖ promoted as religious life, its members easily infiltrated the places they ultimately aimed to take over.

The main trials on the coup attempt are being held in Ankara, and they are notable for the large number of defendants. In the Akıncı air base trial, there are 474 defendants. Its conclusion will mark a closure point for relatives of victims in one of the most significant chapters in the coup attempt. Akıncı, closed after the coup attempt, served as command center of the putschists who ordered the launch of airstrikes from the base to strategic locations in Ankara, including Parliament and the presidential complex. It was also at Akıncı that top military brass, including then-Chief of General Staff Hulusi Akar, who opposed the coup attempt, were held hostage. Adil Öksüz and other "civilians" accused of conspiring in the attempt were captured at the base by anti-coup forces.

Another trial with a large number of defendants concerns incidents at the Office of the Chief of General Staff, the tightly guarded headquarters of Turkish Armed Forces (TSK) in Ankara in which 224 people are on trial. With the help of fellow putschists stationed at the headquarters, coup plotters stormed the place on July 15, 2016, to abduct army chief Hulusi Akar. Commanders of other military units were also held by putschists who ambushed them as they entered the headquarters, unaware of the putsch bid. Civilians, who heard about a coup unfolding on TV, rushed to army headquarters, waving flags and shouting at the putschists to lay down arms but were met with a hail of gunfire that killed nearly 25 people. Some military officers who resisted the coup plotters invading army headquarters were also killed.