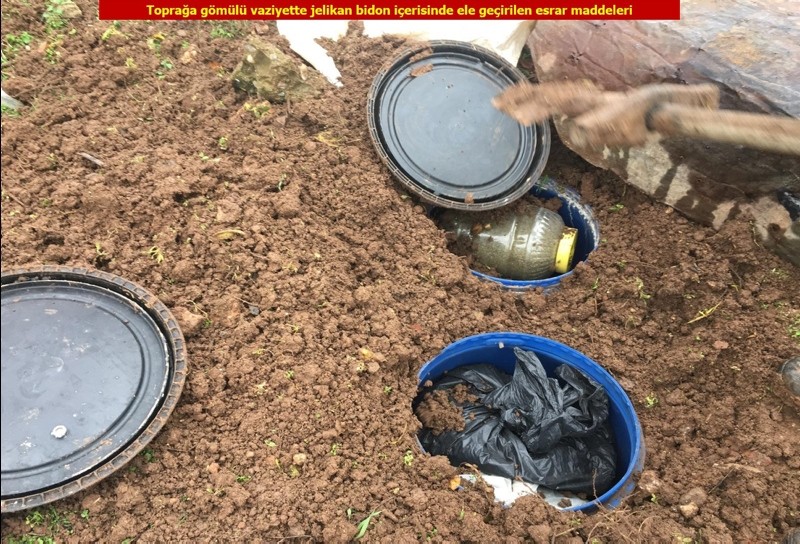 Security forces in southeastern Turkey seized 175 kilograms of hashish in operations against the PKK terrorist group, which is accused of relying on drug cultivation and trafficking for revenues

The seizure is yet another sign of the PKK's dependence on the drug trade as it faces a stronger crackdown by Turkey in response to attacks targeting civilians, police and military officers.

In a statement, Diyarbakır Governorate said the gendarmerie and the village guards carried out operation at 13 different addresses in Lice district between Dec. 17-19.

During the operation, they seized the hashish at the backyard of a house. The owner of the house, known by the initials S.O, was arrested, the statement said. An improved explosive mechanism, binocular, and some other evidence were also seized in the operation.

A Turkish police report released on Sept. 26 reveals the PKK terrorist organization is active in all the phases of drug trafficking including the production, delivery, distribution, and sales.

The terror group reportedly produces heroin in laboratories in its camps in northern Iraq and sells it to Europe. In its production process, the PKK terrorist organization forces civilians to produce cannabis roots in eastern and southeastern provinces of Turkey and uses that money to fund terror activities.

The terror group earns $1.5 billion from drug trafficking annually, according to the 2018 Turkish National Drug Report that contains the data of previous year.

Lice has long been at the center of local drug production in Turkey. The PKK has been accused of controlling drug production and trade in the region. In July 2013, security forces destroyed around 2 million cannabis plants in Lice in a major counter-narcotics operation. According to intelligence reports detailing the drug trade, Lice is the main base for the terrorist organization's cultivation of cannabis for the production of hashish. Anti-narcotics operations and tightened security measures have led to a decline in profits from the drug trade.

Experts say Lice and the southeastern region is favored for the cultivation of cannabis because its climate is favorable and because the mountainous terrain hinders easy access by security forces. Although no concrete numbers are available, authorities believe about two-thirds of the illegal cannabis cultivated in Turkey is grown around Diyarbakır. The amount of cultivation considerably fell as Turkey stepped up its crackdown on the terrorist group. The PKK, which claims to fight for Kurdish self-rule in southeastern Turkey, recruits members among the predominantly Kurdish population in the region. After a brief lull, it resumed its campaign of terrorism in 2015, especially in southeastern and eastern Turkey. Its members hiding in heavily populated areas hindered Turkey's counterterrorism operations, but the Interior Ministry says that the terrorist group is in tatters after continuous operations over the past three years.

Security sources say that the PKK also produces heroin in laboratories in the camps in northern Iraq and sells the heroin in Europe through supporters on the continent. Turkey occasionally carries out airstrikes in mountainous areas in northern Iraq bordering Turkey that house PKK camps.