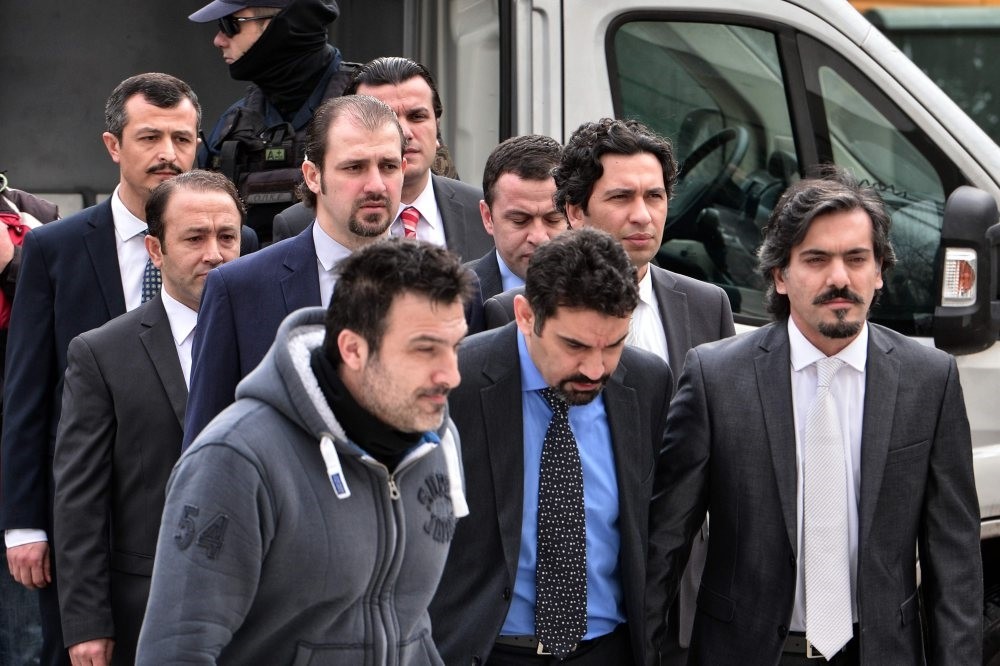 Eight military officers linked to FETu00d6 walk to a Greek courthouse on Jan. 26, 2017, one year after they fled to Greece from Turkey where they participated in a coup attempt.
by Daily Sabah with AA Dec 22, 2018 12:00 am

Turkish officials say more than 17,000 people, mostly suspects linked to FETÖ, the terrorist group blamed for the 2016 coup attempt, have sought asylum in EU countries in the past two years, highlighting Europe as a safe haven for terror suspects

More than 17,000 requests for asylum in EU countries from Turkey since October 2016 have been dominated by members of the Gülenist Terror Group (FETÖ), Turkish officials speaking to Anadolu Agency (AA) said Friday.

Germany and Greece were among the top EU countries where suspected members of FETÖ, the group behind the 2016 defeated coup in Turkey, sought asylum after the coup attempt, according to a Turkish official who spoke on the condition of anonymity due to restrictions on speaking to the media.

Suspected FETÖ members made up the largest share of asylum-seekers coming from a terrorist group, followed by the terrorist group PKK, the source added.

According to the source, before the 2016 coup attempt, there were almost no asylum applications from Turkey to EU countries, but in the two years since, there have been over 17,300, say EU figures.

Currently, the EU lists Turkey among the top countries of origin for asylum-seekers along with Syria, Iraq, Afghanistan, Iran, Pakistan, Nigeria, Albania and Venezuela.

Still acting under the guise of a charity movement, FETÖ is widely tolerated in Germany where about 14,000 of its members who fled Turkey following the coup attempt reside. Both federal and state governments embrace FETÖ members and turn a blind eye to their activities. It makes Germany a favored destination for the terrorist group, whose members are sought by Turkey around the world. While most of Turkey's other allies, especially countries in Africa, cooperate with Ankara in shutting down FETÖ schools and deporting the group's members, Germany often faces criticism from Turkish officials for its tolerant policy toward Gülenists. Along with the embrace by Berlin, FETÖ members find assistance from fellow members of the group in the form of a nonprofit that seemingly aims to help "refugees." Aktion für Flüchtlingshilfe (Aid Action for Refugees), linked to FETÖ, helps the group's members from Turkey learn German and find jobs and accommodation in the country. Group members who give interviews to German media outlets confirmed an exodus of Gülenists from Turkey to Germany in the aftermath of the thwarted coup attempt. Some senior figures in the group, such as Abdullah Aymaz and Mehmet Ali Şengül, who are among the most wanted terror suspects by Turkey, are known to be in Germany.

Data from the German Interior Ministry shows that 296 people bearing diplomatic passports and 881 others with service passports - issued to public sector employees, soldiers, etc. - applied for asylum in Germany from July 2016 to June 2018, and most are believed to be FETÖ infiltrators in the military and bureaucracy. Half of them were granted asylum.

Greece, which maintains somewhat tainted ties with Turkey due to past hostilities and current tensions over sovereignty issues in the Aegean Sea dividing the two countries, turned into a haven for Gülenists after eight putschists went there. Putschist soldiers who were involved in the coup attempt in Istanbul hijacked a military helicopter and landed in Greece's Alexandropolis seeking asylum one day after the coup attempt. They were tried by a court in Athens and subsequently released, to the chagrin of Ankara. One among them was granted asylum, while the others await the ultimate decision of Greek authorities in a safe house under police protection. Encouraged by the Greek court's decision that defied multiple extradition requests for putschist soldiers, FETÖ members started trickling into Greece. Thessaloniki, where about 7,000 Turks live, was their favorite destination as it is the biggest city nearest Turkey, only 450 kilometers west of the Turkish border. Turkish border patrols have stopped more than 250 FETÖ members in the past two years as they tried to cross into Greece via the Meriç (Evros) river that divides the land border of the two countries. Security measures are already tight across the border, which is also the scene of attempts by illegal migrants from other countries who try to reach Europe.

The Turkish official who spoke to AA added that some Turkish citizens who already have residence permits in the EU countries they live in have not applied for asylum.

According to the EU statistical authority Eurostat: "The stock of pending cases for Turkish applicants has increased considerably over the past six months, with 10,623 open cases at the end of May, increasing to 17,332 pending cases by the end of October."

The increase in the number of Turkish asylum-seekers in EU countries could hurt the visa liberation process between Turkey and the bloc, according to the source.

Under an EU-Turkey readmission agreement signed in March 2016, Ankara is supposed to readmit all irregular asylum-seekers who reach Greek islands from Turkey.

Visa liberation for Turkish citizens traveling to Schengen zone countries is one of the key EU pledges made under the deal.