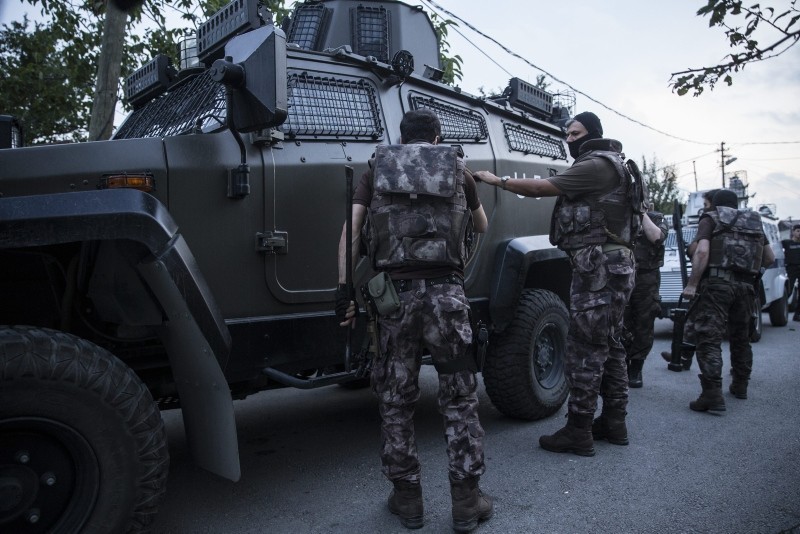 Istanbul anti-terror units during an operation against Daesh members (AA Photo)
by Daily Sabah with Wires Jan 02, 2019 12:00 am

The suspects, including French, Syrian and Algerian citizens, were taken into custody after anti-terror raids in the northwestern province of Bursa, the agency added in the report.

Among those caught were three women including the two French women who had red and blue Interpol notices issued against them, Anadolu Agency and the private DHA news agency reported.

Some of the suspects had been in Syria with the terrorist group before moving to Bursa, the agency said, without giving further detail.

Another suspect was believed to have been a guard for a senior Daesh terrorist.

Five of the suspects have been sent to deportation centers.

There have been a series of raids against Daesh suspects in Turkey in the past two weeks, especially ahead of New Year celebrations.

Earlier on Wednesday, a man and a woman were detained in the central province of Kayseri, accused of having Daesh links and believed to be preparing an attack on New Year celebrations after arriving in Turkey from France three months earlier.

And six foreign nationals were also taken into custody in the eastern province of Elazığ over suspected ties to Daesh terrorist group.

Four of the foreigners -- whose identities or countries of origin were not given -- were deported, the agency said, quoting unnamed security sources.

Turkish security forces have been involved in a long-running campaign to rid Turkey of Daesh terrorists.

During the Operation Euphrates Shield Turkish military had cleared northern Syrian towns of Jarablus, Azaz, al-Bab, Dabiq and al-Rai from the terrorist group. Following the Euphrates Shield operation, which ended in March 2017, Turkey has also put forward efforts to bring life back to normal and enable Syrians in Turkey to return back to their homes.