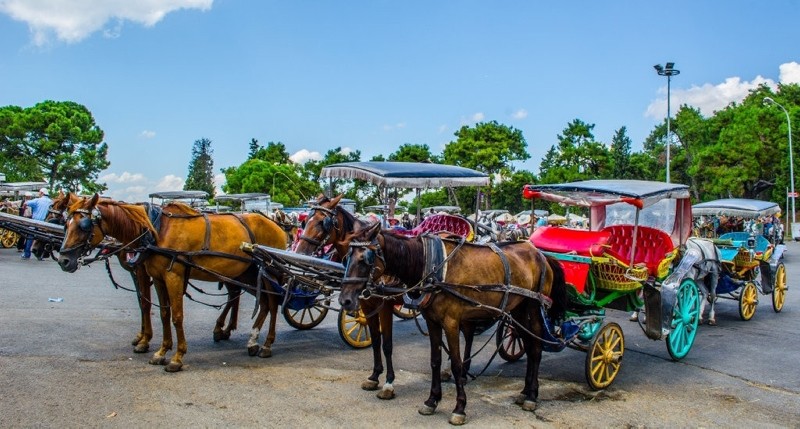 The public prosecutor in Büyükada, the largest of the Princes' Islands off the coast of Istanbul, filed a lawsuit against a group of drivers of the island's infamous horse-drawn carriages over usury accusations.

According to the bill of indictment prepared by Prosecutor Ömer Lütfü Savaş against 45 people, a gang called "Laçinliler", including three members of the Al family, have seized 45 real estate properties that belonged to the victims of the gang's usury loan scheme, Turkish daily Hürriyet reported.

The Criminal Court of General Jurisdiction on the island approved the charges of usury and ruled that the promissory notes signed by the victims had no "legal or commercial basis."

Three suspects, father Yalçın Al and his sons Gürkan and Emir, were said to have lent money to some businessmen and coachmen on the island and made them sign non-legal promissory notes.

According to the filings of the case the gang also confiscated numerous seaside mansions and hotels after their victims were unable to pay rent or debts.

Yalçın Al, who was found to be living in a house worth TL 6 million ($1,093,194), has accepted that he swindled many people with this scheme. According to the family's testimonies, Gürkan collected the money and his younger brother Emir helped him in the process.

The investigation uncovered a number of checks, promissory notes and datebooks containing in-depth information about their victims in the gang's homes and workplaces.

The probe also found the rapid increase in the suspects' assets to be "contrary to the usual flow of life," and ordered 17 carriages to be seized.

The first hearing of the case will be held in May. The accused are facing two to five years in prison and up to 5,000 days of judicial fine.