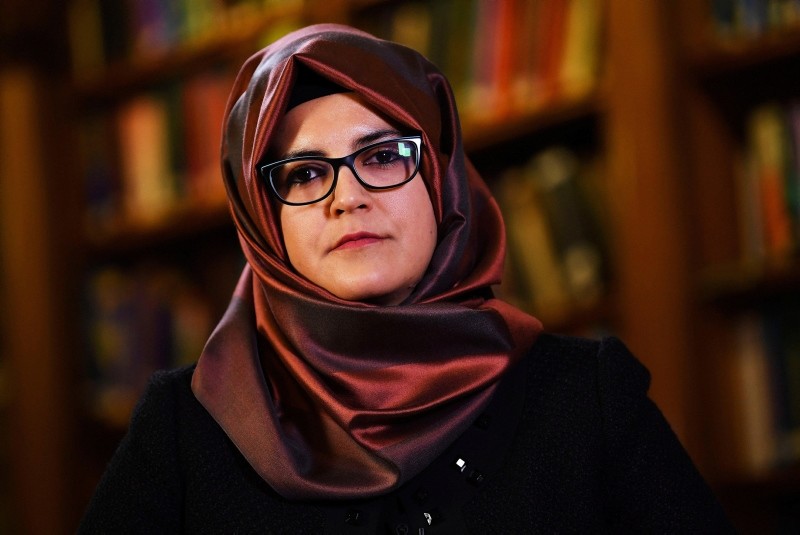 The Istanbul Police Directorate revealed shocking details about the murder of Saudi journalist Jamal Khashoggi, saying that his fiancee Hatice Cengiz would have likely been the Saudi assassination squad's second victim had she been at the consulate.

In its 2018 annual report, the directorate said that the officer standing guard in front of the consulate could have been the key to Khashoggi's salvation but also could've been Cengiz's ticket to the other side with Khashoggi.

"The guard did not mention to the Saudis inside the consulate that Khashoggi had someone waiting for him outside. If he had, there were two possibilities," the police said. The same official informed the Saudis of Khashoggi's arrival immediately, but chose not to report Cengiz' arrival, the report added.

The report also stated that Saudi Arabia's Istanbul consulate had three wells, two of which were water wells, and one which was a natural gas and wood fired tandoor oven. If the tandoor oven was used with both heating sources then the temperature inside could have easily reached 1,000 degrees, effectively leaving no traces of DNA behind, the report implicitly stated.

It also reiterated that one of the members of the hit squad, Dr. Salah Muhammed Al-Tubaigy, the head of forensic evidence, who did his master's degree on the analysis of DNA extracted from bones, was an expert on the issue.

In another chilling revelation, police found that the Saudi assassination squad had ordered 32 portions of raw meat from a well-known restaurant for the consulate after the deed, strengthening suspicions that they got rid of the journalist's body by burning it.

The fact that chemicals were used to clean the scene also indicates efforts to obscure evidence, the report underlined, pointing out that footage showed the Saudi squad having a hard time carrying their suitcases — which should've been left at their hotels — while exiting the consulate building, but had no difficulty whatsoever upon entrance.

Reiterating that the cameras at the consulate were reported broken by onsite personnel, the police report said their investigation discovered that the technical service that takes care of the cameras was unaware of the issue.

"There was no reported malfunctioning of the cameras in 2018," the report said, adding that the last report on broken cameras was done on July 5, 2017.

Meanwhile, new footage from that day, which finally uncovered the local collaborator that was mentioned by Saudi authorities, showed Khashoggi's body double in a hoodie. His identity, however, still remains unknown.

The foreign minister of Saudi Arabia previously mentioned a local collaborator who helped the hit squad commit the murder, only to later deny that such a person even existed.

The report also revealed that the Anti-Terrorism Branch of the Police Directorate received 224 calls and reports from people about Khashoggi, with a particularly interesting one from the United States.

According to the police, a person who claimed they had ties to NASA said: "They took Cemal Kaşıkçı to Cairo and killed him."

The Istanbul Security Directorate said it carefully examined every report they considered serious and credible.

Khashoggi was killed and dismembered by a group of Saudi operatives in the country's consulate in Istanbul on Oct. 2, 2018. Initially denying and later downplaying the incident as an accidental killing in a fistfight, almost three weeks after the disappearance Riyadh finally admitted that Khashoggi was murdered in a premeditated action but denied any involvement of the royal family.

Despite more than 100 days passing since Khashoggi's assassination, the whereabouts of his body remains unknown.