Majority of trials on FETÖ's coup bid wrap up, only 40 to go 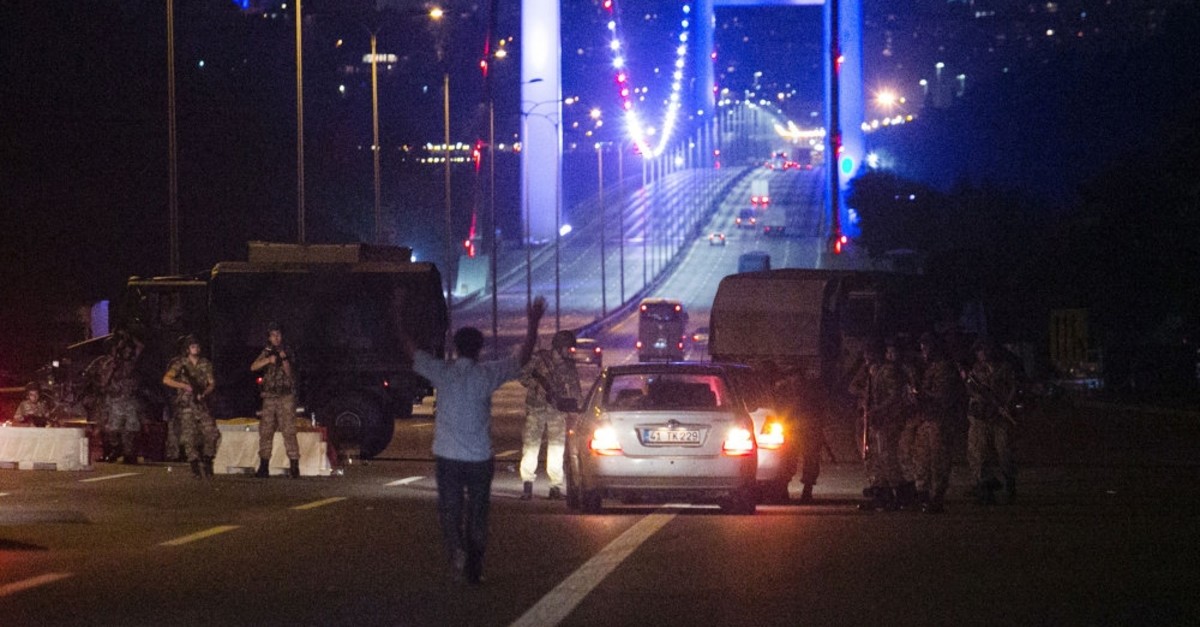 A man approaches putschist soldiers who closed down the Bosporus bridge with his hands, July 16, 2016. Putschists killed 251 people during the coup attempt.
by Daily Sabah Feb 27, 2019 12:45 am

Three years after the FETÖ terrorist group tried to seize power, justice is prevailing with only 40 trials left out of the 289 against officers and civilians involved in the bid

It has been three years since the defendants in the first hearings on the 2016 coup attempt entered courtrooms amid the stares of an angry public. After a lengthy legal process, which is still shorter than other criminal cases, the Turkish judiciary managed to wrap up 249 trials out of 289. Only 40 trials are left on the coup attempt blamed on military infiltrators of the Gülenist Terrorist Group (FETÖ), and most are expected to be concluded this year.

A majority of the defendants are military officers, from noncommissioned officers to high-ranking generals who were stationed in military bases across the country and at the main army headquarters in the capital Ankara. Many were caught red-handed, while others who hid their links to the coup attempt and FETÖ, were arrested within days following the coup attempt. A small number of putschists managed to flee abroad in the early hours of July 16, 2016 as strong public resistance put an end to the ambitions of putschists on the night of July 15, 2016. Despite mounting evidence against them, defendants cling to denial in their defense hearings, blaming others for their actions during the coup attempt. Some even claim it was not them featured in security camera footage openly showing them attacking anti-coup military officers and civilians, much to the chagrin of families of victims watching the trials. This is a strategy to prolong the trials, legal experts say, while FETÖ is found to secretly instill hope in their jailed followers through messages by the group's fugitive leader Fetullah Gülen, who lives in Pennsylvania, United States.

The terrorist group is known for planting its men and women in every institution, from the army to law enforcement, for decades before it openly declared war against the state with two coup attempts in 2013. Disguised with code names, secretive correspondences and a distinct secular lifestyle worlds away from what FETÖ promotes as religious life, its members easily infiltrated into the places they ultimately aimed to take over.

The main trials on the coup attempt are being held in Ankara and are notable for their large number of defendants. In the Akıncı air base trial, there are 474 defendants. Its conclusion will mark closure for relatives of victims in one of the most significant chapters in the coup attempt. Akıncı, which closed after the coup attempt, served as a command center for the putschists who ordered the launch of airstrikes from the base to strategic locations in Ankara, including Parliament and the Presidential Complex. It was also at Akıncı that top military brass, including then-Chief of General Staff Hulusi Akar, who opposed the coup attempt, were held hostage. Adil Öksüz and other "civilians" accused of conspiring in the attempt were captured at the base by anti-coup forces. Öksüz, one of the most wanted suspects in the coup-related cases, is accused of orchestrating the coup attempt with top military brass linked to FETÖ. A theology lecturer by profession, Öksüz was actually an aide to Fetullah Gülen and oversaw FETÖ members' infiltration into the military, prosecutors say.

In the latest trial to conclude, six former military officers were sentenced to aggravated life imprisonment by a court in the southeastern city of Şanlıurfa. Seventeen other defendants were sentenced to prison terms ranging between three years and 12 years, while 22 defendants were acquitted. A separate trial will be held for Fetullah Gülen's role in the Şanlıurfa leg of the putsch attempt. This is usual practice in all coup-related trials while Ankara still struggles to ensure extradition of Gülen from the United States. The highest-ranking officer among defendants in the Şanlıurfa trial was Brig. Gen. Metin Alpcan, commander of an armored brigade deployed in the city. Alpcan was under the command of the Peace At Home Council of putschists, according to prosecutors. Prosecutors say he was "appointed" as Şanlıurfa commander by the so-called council one day before the 2016 coup attempt that killed 251 people. On July 15, 2016, Alpcan told fellow commanders that the army would "seize power" at 3 a.m. and would declare curfew a few hours later. Multiple investigations and accounts of defendants collaborated with authorities show that the coup was originally planned to start at that hour on July 15, 2016, but putschists decided to launch it earlier when they felt that authorities suspected an imminent coup. The Şanlıurfa governor tried to convince Alpcan "not to follow the orders" of the putschists, but the general refused and ordered military personnel to "get ready," an indictment against him says. The general refused the accusations in the final hearing and said he was "only doing his duty" and tried to "protect his brigade" when he ordered the deployment of military personnel around the base he was stationed at. The court convicted him and five other officers of "attempting to overthrow constitutional order."