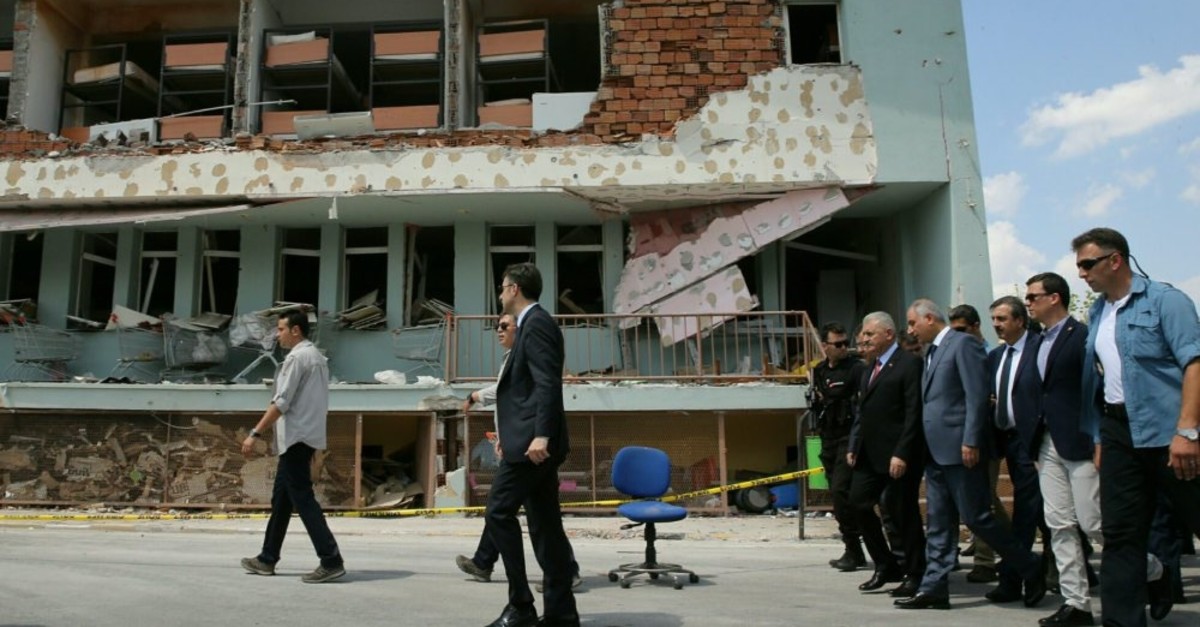 Then prime minister Binali Yu0131ldu0131ru0131m visits the bombed headquarters of Special Operations Unit of police in Ankara, July 22, 2016. Uu011fur Uzunou011flu who was behind the airstrike targeting the building, claimed he ,slept, during the coup attempt.
by Daily Sabah with Agencies Mar 28, 2019 10:21 pm

Few among the defendants in cases related to FETÖ's 2016 coup attempt admit their role in the brutal bid that killed 251 people and, despite outright evidence, most cling to denials and lies in hearings

It might be something to do with the prison sentence they face, but like they discussed and agreed upon beforehand, almost all the defendants in coup trials insist they are not putschists who played key roles in the July 15, 2016 coup attempt. From generals to low-ranking officers caught red-handed, nobody seems to be the culprit behind airstrikes, armed attacks on civilians and other crimes blamed on the Gülenist Terror Group (FETÖ). FETÖ is accused of orchestrating the coup attempt that killed 251 people. Some flatly deny it was they in security camera footage presented as evidence in the trials, while others claim they were not aware of a coup unfolding right before their eyes.

Take Mehmet Fatih Çavur, for instance. This former major in the Air Force led a meeting of putschists in his residence before the coup attempt and was aboard the first warplane that took off in the capital Ankara to help putschists. He flew low over the Office of Chief of General Staff, the army's headquarters, to intimidate anti-coup officers and civilians gathered there to fight putschists who invaded the headquarters. More importantly, he was the one who instructed fellow putschists where to carry out airstrikes. His radio conversations with other putschists and testimony of other defendants in coup trials against him portray him as one of the main actors in the putschists' actions in Ankara.

Çavur was the officer who relayed FETÖ's orders to bomb the presidential complex to pilots who took part in airstrikes. He is accused of playing a key role in the deaths of 78 people during the coup attempt. Müslim Macit, another pilot accused of killing 15 people in airstrikes on July 15, 2016, was among those testifying against Çavur. He said the major told them one day before the coup attempt that "tomorrow will be a different day."

"He told us whether we wanted to join 'the operation' and encouraged us by saying we were 'trained for this day'," Macit told the court. "They can't hear us now," Çavur said mockingly over the radio to a fellow putschist pilot after he flew low over army headquarters. He was captured by police, while fleeing in a car with other putschists after the coup attempt was thwarted. Çavur initially admitted his role in the coup to the police but turned to denial when he appeared before a court. He claimed he flew over the army headquarters "under the orders of his superiors" and it was not him whose voice was intercepted in radio conversations of putschist pilots. He also denied it was him seen in security camera footage that captured the actions of putschists inside a military base in Ankara. Çavur faces 79 instances of aggravated life imprisonment for crimes related to the coup attempt.

Brig. Gen. Cemalettin Doğan was commander of a military base in northwestern Turkey during the coup attempt. He was on vacation in a Mediterranean town at the time of the coup attempt but cut it short and returned to his base to join the coup bid. He is accused of sending a battalion of tanks to Istanbul to aid the putschists' takeover of Istanbul. The battalion was stopped by police en route to Istanbul, and Doğan contacted other putschists when he saw the coup was failing. He texted others they should flee before he was captured. Doğan, who was sentenced to aggravated life imprisonment, denied participating in the coup in a coup trial where he was tried along with 81 other military officers. He denied his correspondence with other putschists and his order to send the battalion to Istanbul. A general testifying against him has told the court that he warned Doğan not to join the coup attempt and telephoned him repeatedly to give up, but Doğan ignored his calls.

Latif Çiçek was commanding the battalion Doğan sent to Istanbul. Çiçek, who was caught on camera threatening unarmed civilians blocking the battalion on the highway, denied his role in the coup attempt as well. Çiçek, who was sentenced to life like Doğan, answered judges' questions on mounting evidence against him with blunt answers like "I don't know" and "I don't remember."

The pilot was among the officers who attended a "coup meeting" at the residence of Mehmet Fatih Çavur and was tasked with piloting his F-16 fighter jet in airstrikes against police. His radio conversation with fellow putschist pilots shows he would "make a big shot" on the Special Operations Unit's headquarters. Uzunoğlu admitted his role in the coup attempt in his initial testimony to prosecutors before his trial but changed his account in the trial. He claimed he took off and flew for 15 minutes as part of "a counterterrorism operation" and spent the night sleeping in the base, which was swarming with putschists on July 15, 2016. He denied it was him that was overheard on the radio despite multiple expert witness reports. Uzunoğlu faces 45 counts of aggravated life imprisonment.