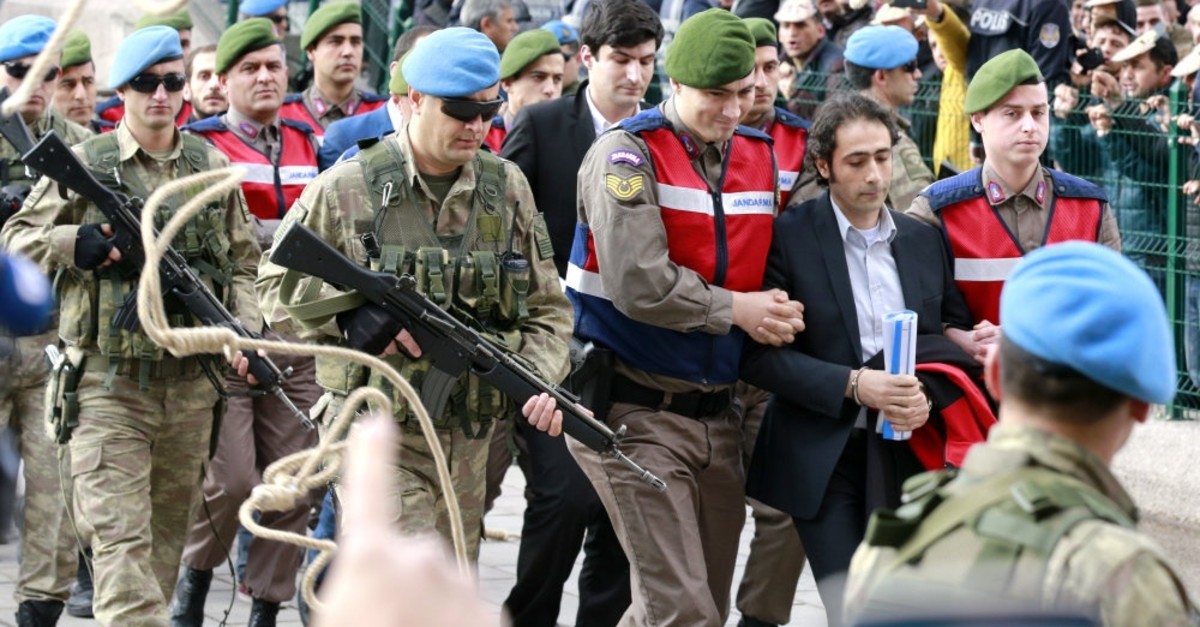 Protesters hurl nooses at defendants as troops escort defendants in another case related to the putschist takeover of Special Forces Command in Ankara, March 21, 2017.
by Daily Sabah Apr 09, 2019 12:03 am

One of the trials on the July 15, 2016 coup attempt that killed 251 people, concluded Monday with a court in the capital Ankara handing down life sentences to military officers involved. Twenty-three defendants were sentenced to aggravated life imprisonment and three others received lifetime imprisonment for their role in the coup attempt.

The coup attempt, which was first in almost two decades in coup-prone Turkey, saw military infiltrators of the Gülenist Terror Group (FETÖ) trying to seize power. The attempt was thwarted thanks to strong public resistance. One of the icons of this resistance was Ömer Halisdemir, a sergeant who gunned down one of the coup's leaders upon the orders of a general he served as an aide.

Halisdemir was stationed at the headquarters of the Special Forces Command, an elite military unit known for its success in counterterrorism operations. Twenty-six defendants sentenced yesterday were also deployed there. Halisdemir, who was posthumously described as one of the heroes of the anti-coup resistance, was shot dead by another set of putschist soldiers who were accompanying putschist general, Semih Terzi, when the latter arrived at the headquarters to take it over. After the killing of Halisdemir, the headquarters were the scene of a brief conflict between pro-coup and anti-coup military officers who ultimately foiled the takeover attempt. Those standing trial in Ankara were those pro-coup officers stopped by Halisdemir's colleagues.

Halisdemir's wife, as well as İsmail Oğuz, a Special Forces sergeant who was shot and injured by the putschists he resisted, were among those watching the hearing Monday.

The court had charged the 26 with the violation of constitutional order, the most serious offense under Turkish laws, while 42 others in the same case were handed down lesser prison terms for a range of crimes from attempted homicide to membership of a terrorist group.

Five defendants were released with a ban on traveling abroad; one of them was Bekir Kurt, who collaborated with authorities in exchange for a lenient sentence. Kurt was slapped with five years in prison but released on the grounds that he had already served a portion of his sentence in prison. Kurt, a noncommissioned officer, had confessed that he had been recruited by FETÖ in his school years, long before he enlisted in the army. Kurt said a few days before the coup, a "brother" told him to help "an officer" if the officer asks for his help. "Brother" usually used to refer FETÖ's handlers for its infiltrators in the military. The coup attempt is blamed on the instructions of FETÖ leader Fetullah Gülen, a U.S.-based former preacher who was also behind two other attempts to topple the government in 2013, gave to his followers to overthrow the government. Kurt's name was found on a list that was in the possession of Col. Ümit Bak, another military officer who was sentenced to aggravated life imprisonment in yesterday's hearing, as one of the officers who would join the coup, though Kurt claimed that he did not play a role in the putsch attempt. The defendant has said in his confessions that he was "a child" when he first met the "cemaat" (the congregation - a word commonly used to refer to FETÖ which had originally posed as a religious charity) and he has always been in contact with FETÖ members during his school years and military career.

Kurt has said that the last time he met a FETÖ member was on July 12. The member he was referring to was a man code named "Nesimi" and a "brother." "He told me there were problems in the country and if I would help if an officer asked for my assistance about 'an issue related to the cemaat.' I asked him who that officer was and he told me the officer already knew who I was," Kurt said in his confessions.