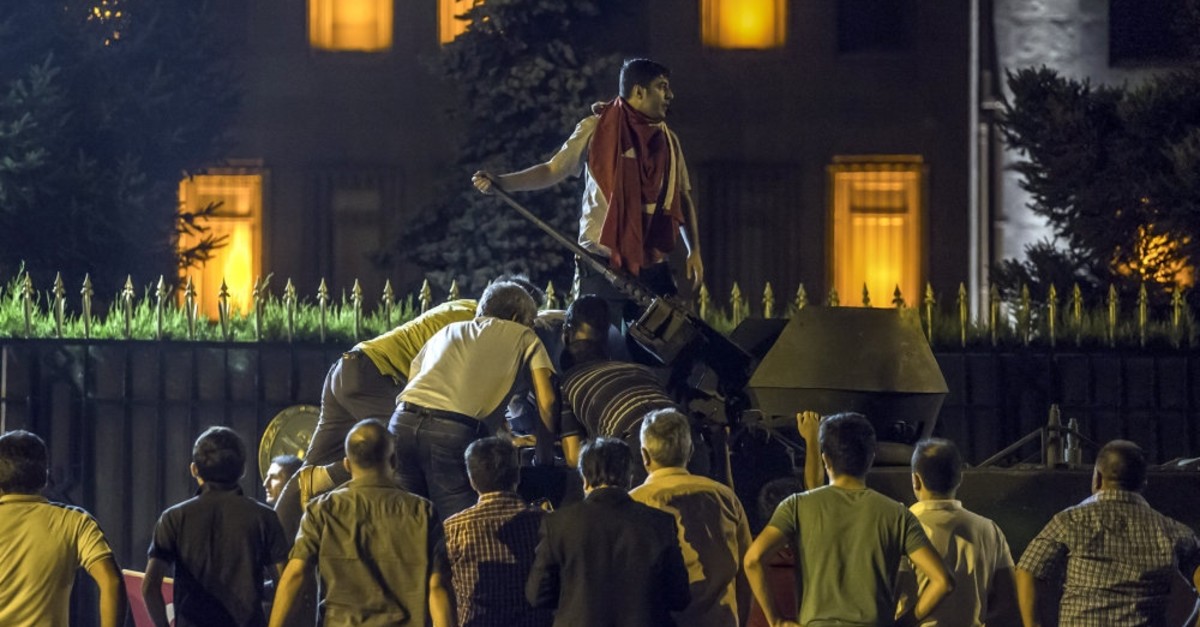 An anti-coup crowd climb on top of a tank controlled by putschists outside the Office of Chief of General Staff, July 15, 2016. The army headquarters was taken over by putschists during the coup attempt.
by Daily Sabah Apr 30, 2019 12:10 am

A total of 16,540 personnel were dismissed from the Turkish Armed Forces and more than 6,000 face legal and administrative inquiry for links to FETÖ and its 2016 coup attempt, military sources confirmed yesterday

In one of the biggest crackdowns in its history, the Turkish Armed Forces dismissed some 16,540 personnel for links to the Gülenist Terror Group (FETÖ), since officers linked to the terrorist group tried to seize power on July 15, 2016.

In a press briefing in Ankara yesterday, military officials announced that there were ongoing legal and administrative processes for 6,154 personnel for the coup attempt and FETÖ links.

FETÖ is accused of using its military infiltrators to topple the government during the coup attempt that killed 251 people and injured hundreds of others. A state of emergency followed and was lifted in July 2018.

Military officials said 1,425 personnel were dismissed since the end of the state of emergency and some 150 retired members of the army were stripped of their rank for links to FETÖ.

The officials emphasized that "power and efficiency" of the army increased after "traitors" were removed. Answering questions whether the dismissals affected the army, especially in terms of pilot shortages, something often reported in the media, officials acknowledged that there have been problems but currently serving pilots also undertook duties which were once "done by more than one pilot" and the problems were resolved with the "endeavor" of serving personnel.

Tens of thousands of people were arrested or detained following the coup attempt, which was thwarted thanks to strong public resistance. Subsequent investigations revealed a large network of FETÖ members in the military. Security forces still launch operations almost on a daily basis to hunt down suspected terrorist group members in the armed forces.

Investigations following the coup attempt had disclosed that military infiltrators of the terrorist group used secretive communication methods to contact their handlers in FETÖ, like multiple phone calls at different times via pay phones to arrange secret meetings or to receive instructions from handlers.

The terrorist group is known for its widespread infiltration of the army, law enforcement, judiciary and bureaucracy. It first attempted to overthrow the government in 2013 with its infiltrators in the judiciary and the Turkish National Police. It failed and the group faced increased scrutiny. When the news broke that the military was preparing to launch a mass purge of FETÖ-linked officers in August 2016, the group moved to prevent it with the coup attempt. Strong public resistance ultimately stopped the coup and the coup's ringleaders, including generals, were arrested.

Several key FETÖ figures, like Adil Öksüz, a theology lecturer who is accused of masterminding the coup attempt with generals, remain at large. According to investigators, Öksüz had meetings in an Ankara villa with members of the "Peace At Home Council" of putschists before the coup attempt and together they planned stages of the attempt.

Öksüz was captured at Akıncı Air Base, the so-called command center of the putsch attempt, on July 16, 2016, hours after the attempt was thwarted. However, he was controversially released by judges who now face legal action for releasing him. Akıncı Air Base was where the top military brass, including then Chief of General Staff Gen. Hulusi Akar, were held captive by putschists who stormed the army headquarters on July 15, 2016.

MONEY FLOW FROM U.S. AND GERMANY FOR FETÖ

Along with investigations into military officers' links to FETÖ, prosecutors also launch multiple probes into "civilian" members of the group. In an investigation in the central city of Çorum, 10 people were arrested last week. They were taken to the court yesterday while details of the investigations were disclosed to the media. Investigators say, suspects, including two German nationals of Turkish origin, were involved in funneling money to the terrorist group from Germany and the U.S. The money was used for "restructuring" FETÖ and recruiting new members, investigators say. Searching the premises where suspects were caught, authorities found more than TL 25,000 along with 520 euros and $1,730, allegedly kept to deliver to fellow FETÖ members.