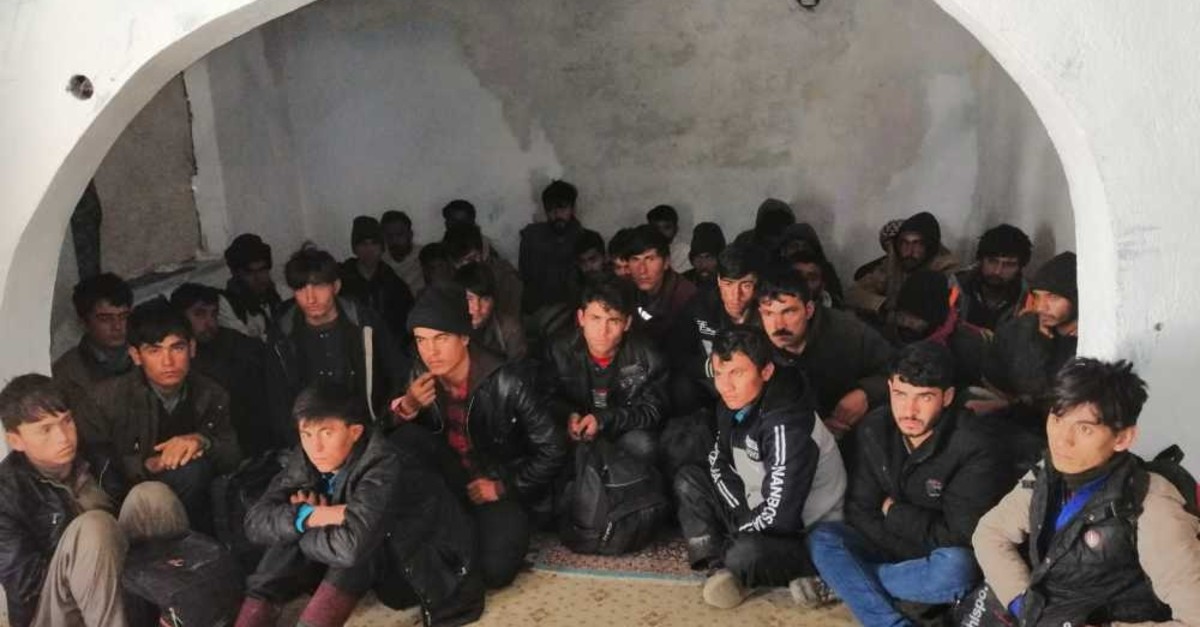 A group of illegal migrants huddled together in an abandoned building in the eastern province of Van. They were discovered hiding there by police on May 1, 2019, after sneaking into Turkey.
by Daily Sabah May 03, 2019 12:28 am

As Turkey tightens security measures on its borders and cracks down on human smugglers, it has seen a decline in the number of illegal migrants looking to reach Europe from its borders. In the first four months of this year, 79,000 illegal migrants were intercepted while the number of those taking to the seas from Turkey's coasts decreased 17.6 percent. The country also stepped up the deportation of migrants sneaking into the country to get to Europe and the rate of the deported rose 34 percent.

There has been a 14 percent decline in Afghan illegal migrants seeking to reach Europe, barring a small number who managed to dodge authorities and made the potentially dangerous journey to the continent. A significant drop of 55 percent was also recorded in the number of Syrian migrants trying to cross into Europe.

The official figures indicate that there was also a 2.44 percent drop in the number of illegal migrants intercepted across the country before their attempt to leave for Europe, compared to the same period of 2018.

The country has been the main route for refugees trying to cross into Europe, especially since the beginning of Syria's civil war. Some 268,000 irregular migrants were held in Turkey in 2018, according to the Interior Ministry. Turkey and the European Union signed an agreement in 2016. The deal stipulates that Greece is to send back migrants held on its Aegean islands back to Turkey. In return, Turkey is to send Syrian migrants it hosts to various European Union countries.

The deal also saw an escalated crackdown on human smugglers and increased sea patrols to prevent immigrants from attempting to reach Greece, the nearest gateway to Europe from Turkey by sea and for a while, this helped reduce the number of migrants. Yet, some desperate migrants still take the route aboard overcrowded, unsafe dinghies. Deaths are common in crossings to reach the Greek islands scattered across the Aegean region, some of which are only a few kilometers away from Turkish shores. One migrant died and 12 others were rescued when a boat carrying Palestinian, Syrian and Iraqi migrants capsized off the coast of Bodrum in southwestern Turkey yesterday.

Figures also show that the number of deported migrants significantly increased and the rate of deported Afghan nationals reached 70 percent. This rate was 79 percent for Pakistani nationals and 34 percent for migrants of other nationalities.

For those managing to reach Europe, Greece remains a dangerous route due to the controversial "pushback" practice. Two Pakistani illegal migrants who were found semi-conscious, half-naked and with bruises on their bodies on the Turkish-Greek border claimed the Greek police beat them and forcibly sent them back to Turkey. Twenty-six-year-old Sufyan Muhammad and 18-year-old Ali Bali were found near the border by gendarme troops in the border city of Edirne yesterday. Speaking to reporters after they were treated at a hospital for their injuries, they claimed Greek police apprehended them in the town of Didymoteicho near the border and beat them. They said police seized their clothes and money before forcing them to cross the border back into Turkey. "The Greeks were cruel to us. They repeatedly beat us and forced us to go to the Turkish side. We are grateful that Turkish soldiers found us and treated us well," Sufyan Muhammad said. Ali Bali gave the same account and said they had to cross the Meriç (Evros) River on the border at gunpoint by Greek security forces.

A Human Rights Watch (HRW) report and accounts of illegal migrants caught on the border show that Greek security forces routinely return migrants to Turkey in violation of international law. The notorious practice called "pushback" is suspected of causing the deaths of at least four migrants found frozen to death near the border in December. Under international laws and conventions, Greece is obliged to register any illegal migrants entering its territory. Figures reported by Turkish media outlets say that hundreds of migrants were "pushed back" last year, and some were subjected to mistreatment by Greek security forces, ranging from beatings to being forced to go back half-naked to the Turkish side. Greece, which has struggled to cope with the huge influx of migrants, especially after the civil war in Syria displaced millions, has also been criticized for decrepit conditions in refugee camps on its Aegean islands.