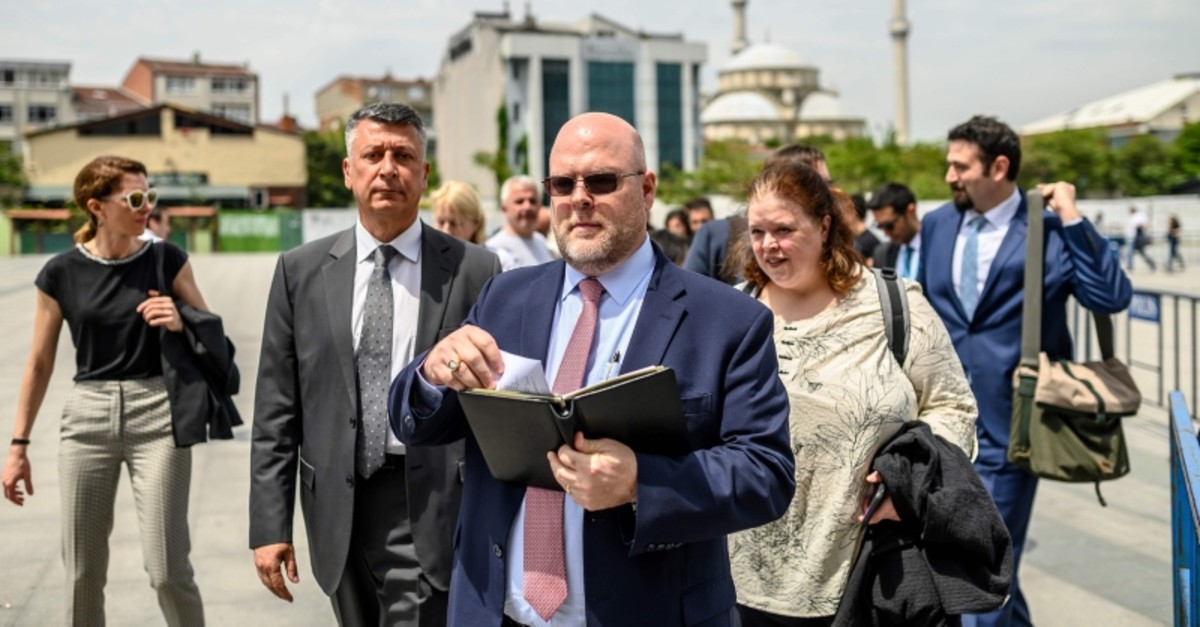 US charge d'affaires Jeffrey Hovenier (L) leaves the u00c7au011flayan Courthouse on May 15, 2019, in Istanbul, after US consular staffer Metin Topuz was ordered to remain in custody after the latest hearing in his trial on espionage charges. (AFP Photo)
by Compiled from Wire Services May 15, 2019 4:13 pm

The Istanbul 14th Heavy Penal Court ruled for the continuation of arrest for an employee of the U.S. consulate in Istanbul on Wednesday in a trial on espionage charges.

Metin Topuz, a Turkish translator for the U.S. Drug Enforcement Agency (DEA) at the consulate, was ordered held at least until his next appearance, which was set for June 28, one of his lawyers, Selman Alibaş, told Reuters.

Topuz would have remained in custody in any case because he faces a separate investigation on charges of seeking to "overthrow the constitutional order," AFP reported citing one of his lawyers.

Prosecutors seek up to 35 years in jail for Topuz on charges of espionage and links to the Gülenist Terror Group (FETÖ), which staged the July 15, 2016 coup attempt killing 251 people and injuring 2,200 others

Topuz, who has already been held since his arrest in 2017, is one of three U.S. consulate employees who have been charged in criminal cases that have been major irritants in the relationship between the NATO allies.

Washington and Ankara are at odds over a range of issues including Syria policy, the U.S. refusal to extradite FETÖ leader Fetullah Gülen, and Turkey's plans to buy the Russian S-400 missile systems and U.S. threats against the purchase.

The indictment accuses Topuz of being in frequent contact with officers who led a series of corruption raids in 2013 in Turkey, which the government has described as a "judicial coup attempt" by FETÖ. He is accused of espionage as well as arranging arms trafficking through exchanges on the WhatsApp messaging service.

Topuz denies the charges, saying it was not his decision who he came into contact with through his work.

On Wednesday, his lawyer presented the court with a list of his phone calls to police, saying they were entirely work-related.

"All my contacts with those in high-ranking positions of the state at the time were entirely part of my work as a translator and assistant liaison officer at the DEA. I am innocent," he said, tearfully, at the trial.

Following the trial, U.S. charge d'affaires Jeffrey Hovenier told reporters there was "no credible evidence of any criminal wrongdoing" against Topuz.

"We reiterate our call on the Turkish authorities to resolve this matter swiftly, transparently and fairly," he said.

Turkey indicted another U.S. consulate employee in March, also accusing him of links to FETÖ. A third employee was freed convicted of terrorism but freed in January due to time served during his trial.