4 suspects in 2016 terror attack on Istanbul's Vodafone Park get record 4,890 years in prison 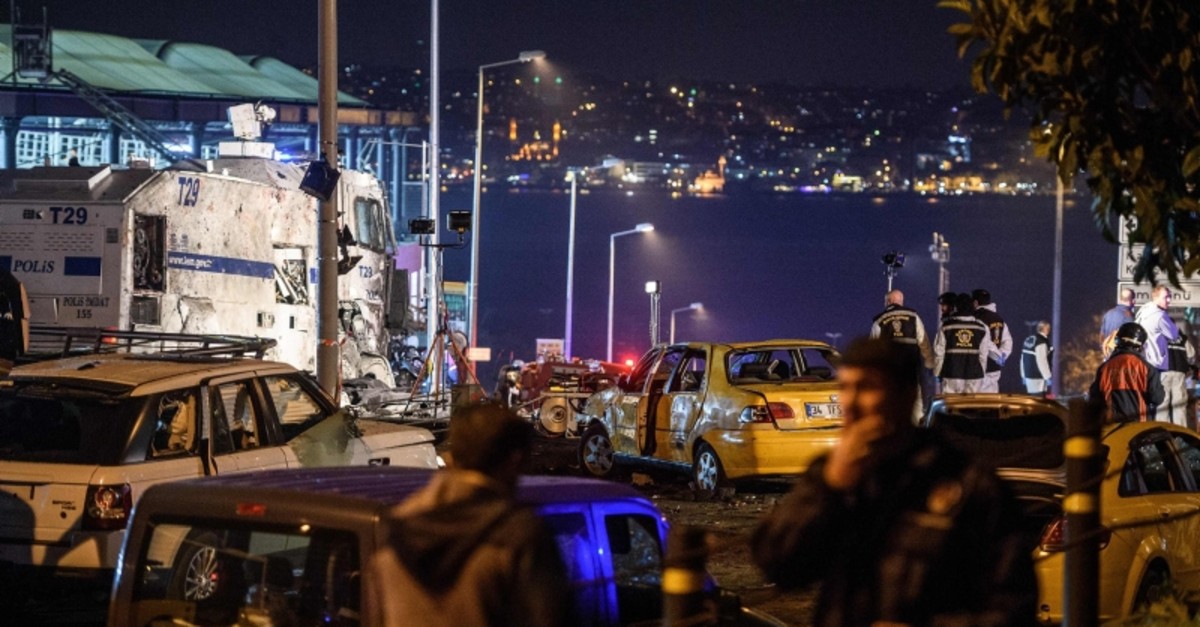 Turkish police officers and forensic work next to damaged police vehicles and cars on the site where a car bomb exploded near the stadium of football club Beu015fiktau015f in central Istanbul on December 10, 2016. (AFP Photo)
by Daily Sabah May 17, 2019 12:57 pm

Four suspects involved in the PKK terror attack that killed 47 people outside of Vodafone Park in Beşiktaş district in Dec. 2016 were handed a record sentence for each of the victims.

Two blasts took place outside Vodafone Arena, home ground of Istanbul giants Beşiktaş, on Dec. 10, just as a match between Beşiktaş and Bursaspor ended. The apparent target was riot police officers deployed for security and preparing to leave after fans had already left. A car bomb was detonated near police buses amid heavy traffic, while a suicide bomber detonated himself in the nearby Maçka Park despite police intervention. The bombings killed 40 police officers and seven civilians and injured 242 others.

The attack was claimed by the PKK's suicide team known as the Kurdistan Freedom Hawks (TAK), which is also responsible for a series of suicide attacks and car bombings directed at security and civilian targets since 2005.

Other defendants were handed down lesser prison terms for aiding a terrorist group and membership in a terrorist group. A separate trial will be held for nine other defendants, including a fugitive defendant as the court ruled a more comprehensive investigation. Defendants sentenced in the trial may also be given additional sentences as the court ruled for a separate indictment over the death of Muammer Ateş, a police officer who succumbed to his injuries last week.

The rulings brought closure to families of victims, and as the hearing ended, relatives of victims waved Turkish flags and chanted "God is great" in the courtroom. Some defendants, meanwhile, made victory signs and chanted pro-PKK slogans as they were exiting the courtroom. In turn, victims' families hurled ropes towards them, symbolizing a death sentence. Turkey abolished the death sentence in 2004 though President Recep Tayyip Erdoğan has repeatedly said that it could be considered again in terror cases if public support in favor of bringing it back increases.

As the PKK softened its rhetoric to restore its image as a brutal terrorist group terrorizing Turkey since the 1980s, the TAK emerged in 2005 as a seemingly splinter group from the PKK. Its first known attack was bombing of a tourist bus in western Turkey in 2005. It carried out a string of attacks with minor fatalities since then, but it made the headlines as a dangerous group with a February 2016 attack targeting a military shuttle in the capital Ankara; 29 people were killed in that attack, which came about one month before another attack in Ankara's Güvenpark that killed 37 people. The Vodafone Park attack was the second major TAK assault in Istanbul in 2016. A female suicide bomber killed six police officers in Istanbul's Vezneciler neighborhood on June 7, 2016.