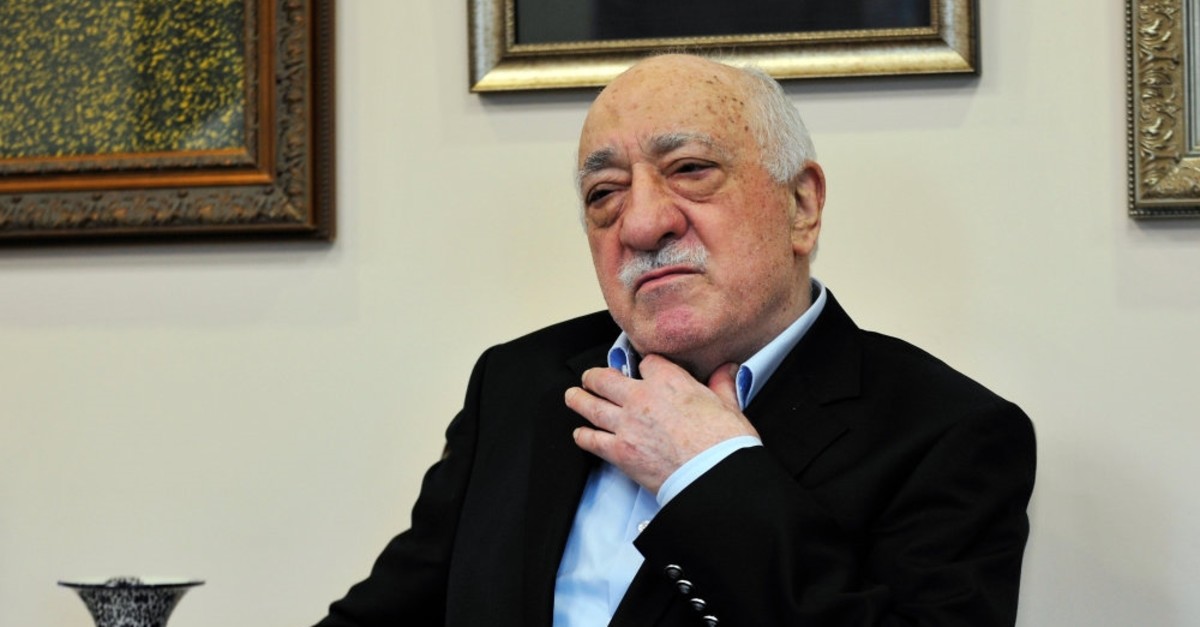 Fetullah Gu00fclen in his Pennsylvania compound on July 17, 2016. FETu00d6's leader controlled a large number of infiltrators in law enforcement, bureaucracy, military and the judiciary.
by Daily Sabah with AA May 21, 2019 12:04 am

Security forces yesterday rounded up 105 out of 249 Foreign Ministry personnel in the latest operations against FETÖ, the terrorist group behind the 2016 coup attempt that killed 251 people

Police Monday detained 105 people in an operation against Foreign Ministry staff accused of having links to the Gülenist Terror Group (FETÖ). The suspects were among 249 wanted by the Chief Prosecutor's Office in the capital Ankara.

These arrests come three years after the terrorist group tried to seize power with a coup attempt that killed 251 and is the largest single roundup of the ministry's staff. Prosecutors announced that the suspects were wanted in connection with fraud in recruitment exams for the ministry in a probe. The probe focuses on allegations of cheating on civil servant exams for the Foreign Ministry that were held in 2010, 2011, 2012 and 2013, and there are five ongoing, separate investigations into exams and members of the committee that oversaw the exams. Prosecutors also announced that 275 people were assigned various jobs in the ministry after they won those exams.

Media outlets reported that only 14 among the wanted suspects were currently working at the ministry, while the rest had been suspended from their posts over alleged ties to FETÖ.

A total of 249 suspects had "enough suspicion" requiring the detention, the prosecutor's office said in a statement, citing expert witness reports about cheating on foreign language exams, telephone communication with other FETÖ members and links to senior names in the terrorist group. They were also users of ByLock, an encrypted messaging app developed and exclusively used by the members of the terrorist group. Apart from the Foreign Ministry admission exam, their names came up in an investigation into other exams that FETÖ was suspected of orchestrating a cheating scheme. A manhunt is underway in 42 cities to capture all the suspects.

Tens of thousands of suspects were dismissed from their public sector jobs, detained or arrested following the coup attempt on July 15, 2016, which was carried out by the terrorist group's infiltrators in the military. Several Foreign Ministry personnel were among those who were fired from their jobs and subsequently arrested for links to the group. The most high-profile names at the ministry linked to FETÖ were Gürcan Balık, a former ambassador and executive assistant to former Foreign Minister Ahmet Davutoğlu and Tuncay Babalı, the former ambassador to Ottawa. Balık and Babalı were sentenced to six years and three months in prison for FETÖ membership. Balık was released but faces a new arrest warrant after prosecutors objected to his release. Both men served as members of the committee overseeing the exams that allowed FETÖ members to cheat.

FETÖ is already implicated in a string of cheating allegations in public exams, and dozens of its members were jailed for cheating on a 2010 exam for recruitment of civil servants in separate trials. The group is accused of using the exams as a stepping stone to the public sector, where many of its members found jobs. Multiple investigations into the group's methods for cheating found that FETÖ leaked questions and answers to young members, either handpicked by the group's leaders or eager to join the public sector. Former members of the group had testified in other cases that point men and handlers for FETÖ provided them questions and answers for exams. Civilians are believed to have gained access to well-protected questions and answers through infiltrators in bodies tasked with organizing the exams.

The terrorist group is known for its widespread infiltration of the army, law enforcement, judiciary and bureaucracy. It first attempted to overthrow the government in 2013 with its infiltrators in the judiciary and the Turkish National Police. It failed, and the group faced increased scrutiny. When the news broke that the military was preparing to launch a mass purge of FETÖ-linked officers in August 2016, the group moved to prevent it with the coup attempt. Strong public resistance ultimately stopped the coup, and the coup's ringleaders, including generals, were arrested.

A new report by counterterrorism police on FETÖ's infiltration into the military was released yesterday, and it goes on to show how the group hid intimate ties between military infiltrators and their nonmilitary handlers. The report on "communication model via payphones/public phones" shed light on this secretive communication method adopted by FETÖ to dodge suspicion and more broadly, how FETÖ gained access to higher places over the years, and how it worked without drawing suspicion to its activities. It is compiled from findings in investigations, eyewitness accounts and reports by expert witnesses on the terrorist group. It says FETÖ first started infiltrating the Turkish Armed Forces in the 1980s and "did it systematically" starting in the 1990s. "This is a long-term job. Do not rush in and do not disclose yourselves," FETÖ's fugitive leader Fetullah Gülen was quoted saying in the report, in a statement taken from his conversation with a group of Air Force School cadets in the 1980s during his regular meetings with followers. "We will be in the military, education, law enforcement, judiciary, in the most active jobs in those places. There won't be anything any one can do when we move within 20-30 years," Gülen says in one of those meeting, correctly predicting the clout his group held in Turkey when it tried to seize power.

The report says FETÖ called its infiltration into military "secret services" and sought from those infiltrators both utmost loyalty to the group and a high level of secrecy to avoid being detected as members of the group. Children of middle school or high school age were recruited by the group while attending school and convinced to stay in special dormitories run by FETÖ. They would be brainwashed with FETÖ's doctrine there and effectively recruited into what the terrorist group saw as a "holy cause." Students with a promising career in the military were handpicked, and those "with problems" would be weeded out early, before FETÖ had its infiltrators take the admission exams for military schools. Once they were in military school, every student or more than one student would be assigned a handler, while those who left the terrorist group but continued military school would be monitored by FETÖ-linked cadets. Investigations show there were "brothers" or "imams" responsible for soldiers of different ranks. There would have been a "brother" or "imam" for generals, another for lieutenants, captains, majors and another for noncommissioned officers, etc. The police report says every military force, gendarmerie, Land Forces, Air Forces and Naval Forces had a senior FETÖ member in charge of military infiltrators, and they had subordinates who monitored officers of different ranks separately for FETÖ. FETÖ handlers for infiltrators would regularly hold meetings to discuss the state of infiltrators and intelligence on non-FETÖ members of the army supplied by infiltrators. The meetings would also cover messages from Fetullah Gülen, the reassignment of FETÖ members and even marriages of single infiltrators.

A senior FETÖ handler caught in operations told authorities that he was given a cellphone to be exclusively used to contact other handlers and that they were barred from contacting infiltrators they had been overseeing via this cellphone. The unidentified handler was quoted in police report saying that they were instructed to contact military infiltrators only via payphones in kiosks in busy places. "Every student [infiltrator] has to contact a handler once a week and if they didn't, they'd be reported by the handler to his superior [in the terrorist group]," the handler said. According to his statement, cadets or students were the most important people in terrorist group's hierarchy, and they'd be promoted to higher ranks relative to their loyalty to FETÖ. FETÖ is known for helping the promotion of military officers loyal to the group by helping them cheat in exams or green lighting their promotion through fellow FETÖ-linked officers in the army.

The police report says that the terrorist group turned to multiple means of "safe" communications from contacts with encrypted phone lines to social media and ByLock, and arranged face-to-face meeting only on important matters for the terrorist group. Those overseeing military infiltrators would occasionally use cellphones that they would dispose of in a given period, like once every three months. Cadets in military schools and, later military officers, would determine a payphone number and give it to their handlers in their first meeting before switching to contacting them by phone for the rest of their meetings. In this case, the handler would save the payphone number on his cellphone and would be called at regular intervals by infiltrators.

Investigations into payphones date back to a few years ago, and police carried out the first operation to capture suspects involved in this communication scheme in March 2017. Between 2017 and December 2018, 677 operations were held across Turkey. Some 3,631 suspects were detained in operations, while there are outstanding arrest warrants for 735 fugitive suspects.