Main trial on FETÖ's coup attempt draws to a close 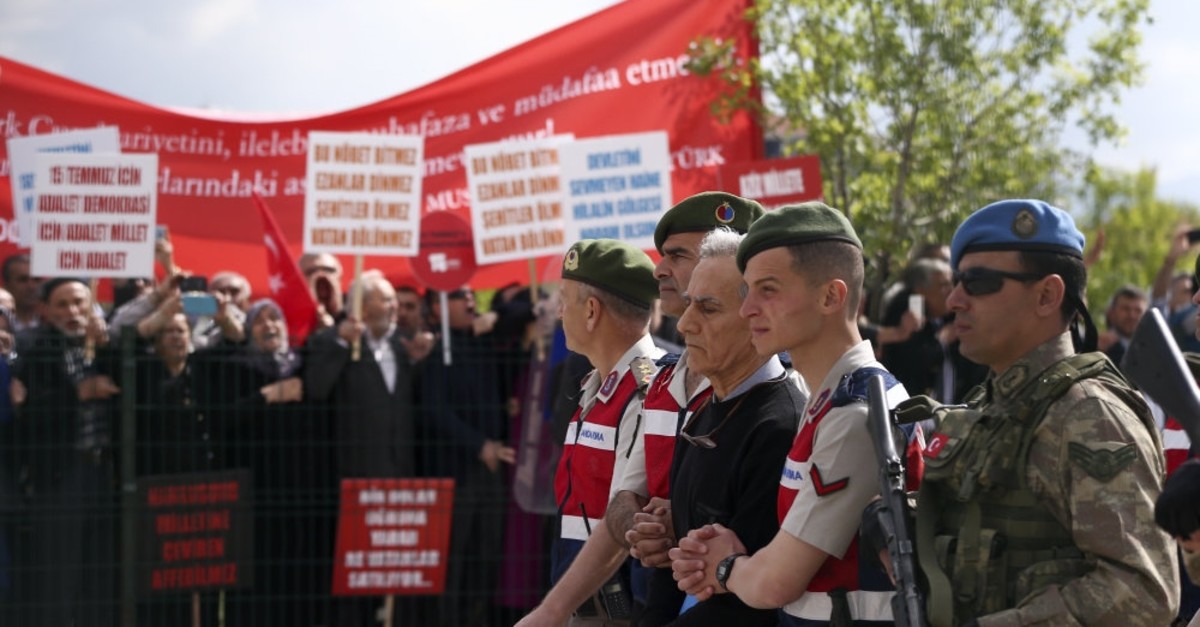 Aku0131n u00d6ztu00fcrk, a former general accused of leading putschists being brought to the courtroom as protesters boo him and wave anti-coup banners prior to a 2017 hearing.
by Daily Sabah May 29, 2019 12:14 am

A court in the capital Ankara will soon issue its verdict for 224 defendants in the main trial on the takeover attempt of the Turkish Army's headquarters during the failed coup in July 2016.

In the hearings held yesterday in the capital, the court decided that the final ruling will be issued in the next hearing scheduled for June 20. The hearings have been continuing for weeks as the defendants, who include members of the putschists' "Peace At Home Council," made their final statements. The defense was mixed, as some officers on the dock said they were framed while others claimed what they were only following orders.

Col. Murat Korkmaz, who led a battalion of elite Special Forces, was among those "following orders" and claimed he was commanding the soldiers to the army headquarters for a counterterror operation. Ahmet Bican Kırker, a general among the leading putschists, said he would not accept any verdict by the court "other than acquittal." Gökhan Şahin Sönmezateş, the general who was probably the only defendant to admit he was involved in a coup though he rejected having links with FETÖ, said he would not make a final statement.

Akın Öztürk, a general who was a member of a powerful military body at the time of the coup attempt and was accused of heading the Peace At Home Council, pleaded not guilty. "I have been on trial for 34 months, and prosecutors have asked for life imprisonment for me. The allegations against me are lies," Öztürk said. The general was at Akıncı Air Base, the command center of the putschists in Ankara, when Chief of General Staff Hulusi Akar and other generals were abducted and brought there. Öztürk claimed he was at the air base simply for a visit and came across Akar and the other victims by coincidence.

So far, 254 out of the total 289 trials over FETÖ's 2016 coup attempt have been concluded. The rest are expected to be concluded by the end of this year.

In its attempt to seize power, the terrorist group killed 251 people and injured hundreds of others. Since then, hundreds of military officers and civilians who took part in the coup attempt have been brought to justice. In the concluded trials, 1,952 defendants, ranging from generals to low-ranking officers were sentenced to life and a total of 3,101 defendants received varying prison terms for their role in the coup attempt.

More often than not, defendants have clung to outright denial despite prosecutors supplying the courts with evidence such as security camera footage of putschists firing on civilians and the accounts of eyewitnesses. Legal experts say that defendants are simply trying to prolong trials and take their cases to international courts where they believe they have a chance of acquittal.

After the coup attempt was quelled thanks to a strong public resistance, more than 100,000 new investigations were opened into the attempt and FETÖ's role in the putsch. Those handed down aggravated life sentences, the heaviest sentence in Turkey after the abolition of the death penalty years ago, have little chance for eligibility for an early release from prison. Among those sentenced to aggravated life imprisonment are 58 generals, 651 officers, 137 noncommissioned officers and four police officers. Fifteen generals, mostly those who were stationed in smaller cities where the coup had less impact, were sentenced to life imprisonment, along with 325 officers and 99 noncommissioned officers.

Some 1,149 people were handed down prison terms ranging between a year and two months to 20 years for their roles in the putsch bid. A smaller group of defendants, including some military school cadets who were unknowingly pushed into the coup by their superiors, were acquitted in the trials.

Since the coup attempt was quelled, thousands of people have been detained or arrested for FETÖ links and actively participating in the coup attempt. Operations still continue to apprehend soldiers and civilian members of the terrorist group. Prosecutors issued arrest warrants for over 100 people across the nation for their suspected links to FETÖ. Istanbul prosecutors sought the arrest of 74 suspects, 32 out of them active duty soldiers, with warrants as part of a FETÖ probe into the infiltration of the terror group into the Turkish Army. Colonels, lieutenant colonels, and commanders are among the soldiers sought after by security forces. Separately, prosecutors in southern Adana province issued arrest warrants for 27 soldiers, including 20 personnel on active duty. Police have conducted raids in 18 provinces to find the suspects.

Also in Adana, a Somalian national, who is accused of serving as FETÖ's recruiter for foreign students, was detained. FETÖ is known for running a global network of schools and companies and still enjoy relatively free rein in countries not heeding Turkey's calls to shut down its schools and extradite members.