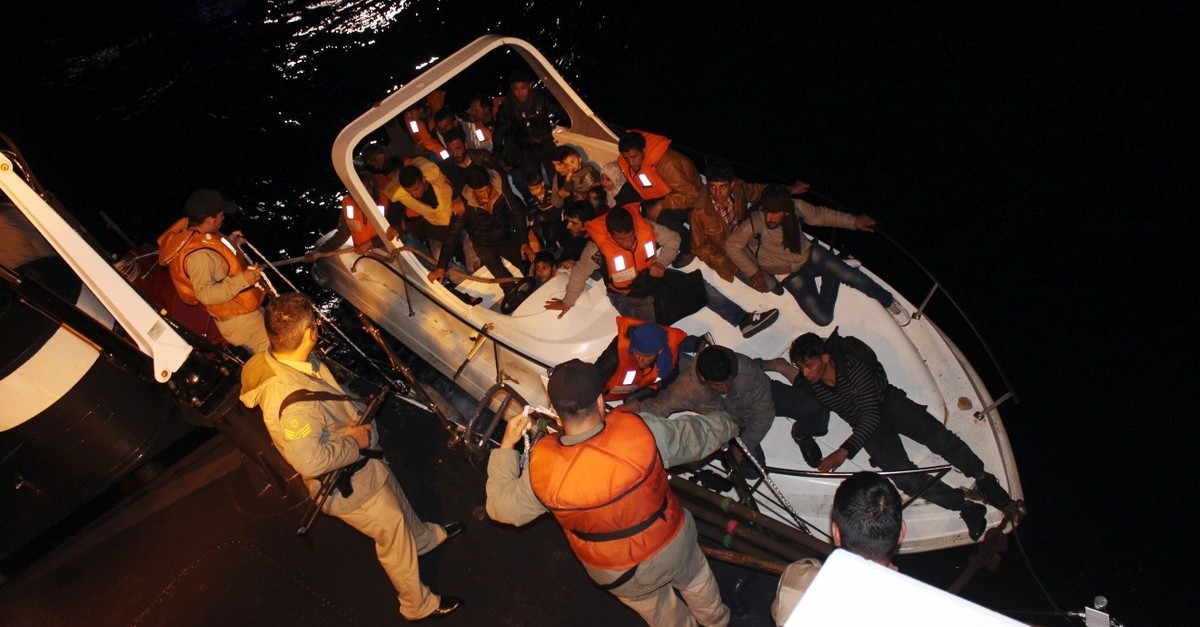 Coast Guard intercepts 30 illegal migrants aboard a speedboat off the coast of Antalya, April 14, 2017. Migrants, aided by human smugglers, pay high fees for potentially fatal journeys.
by Compiled from Wire Services May 30, 2019 12:05 am

Authorities captured an Iraqi man, dubbed as the head of the 'biggest human smuggling gang of Europe' by the Turkish media, in operations in Istanbul and several Aegean cities, where the suspect and his group were accused of smuggling migrants

Akbar Omar Tawfeeq, an Iraqi national accused of running a prominent human smuggling ring, was arrested in a crackdown against smuggling last week, authorities announced yesterday. Tawfeeq is dubbed as the leader of Europe's largest human smuggling gang by the Turkish media and is reportedly behind the transfer of a large number of illegal migrants to Europe from Turkey.

The suspect and 24 others were apprehended in operations in Istanbul and the Aegean cities of Muğla, Çanakkale and the western city of Balıkesir on May 25. Operations were carried out in collaboration with the Istanbul police, the Istanbul branch of the National Intelligence Directorate (MİT) and army Coast Guard units that have been on the front line in efforts against human smuggling and illegal migration.

Security sources said Tawfeeq and his gang have been under surveillance for one year, and they were planning to flee abroad when they were captured. Along with Tawfeeq, five other foreign suspects were nabbed though their nationalities were not disclosed. In one boat belonging to the gang and stopped before its occupants attempted to flee abroad, police found a large amount of U.S. dollars and euros. Seven boats owned by the gang and reportedly used for smuggling were also seized, while police were searching for another boat.

Tawfeeq lived in a luxurious manor in Istanbul's Ataköy district and posed as a wealthy tycoon, according to security sources.

The gang was also accused of cooperating with the terrorist PKK and the People's Protection Units (YPG), the PKK's affiliate in Syria, for human smuggling from Syria and Iraq. Smuggled migrants would then be taken to Greece, the gateway to Europe from Turkey and from there, travel to Italy and other European countries.

In one year, 569 migrants that were to be smuggled were intercepted. The gang would charge migrants at least 5,000 euros ($5,577) for illegal and dangerous journeys and earned about 2 million euros yearly. Along with boats, police seized a large cache of life vests in possession of gang members, apparently delivered to migrants taking to the Aegean Sea to reach Europe.

The gang exploited the hopes of migrants fleeing conflict and poverty and targeted Afghan and Iraqi nationals in particular, security sources say. They helped them both to infiltrate Turkey and secretly travel to Greece and from there, to other countries, in exchange for high fees. They had several connections in Greece for the transfer of illegal migrants to other countries.

An investigation into Tawfeeq's wrongdoings also found that he recently obtained Dominican citizenship and was planning to take his human smuggling scheme to the Americas to help illegal South American migrants to the United States. Turkey has been a major route for refugees trying to cross to Europe, especially since the beginning of the civil war in Syria about eight years ago. Migrants often take deadly journeys aboard unsafe dinghies and journeys occasionally end up with deaths of migrants without any experience steering the dinghies and due to bad weather.

Last year, 93 migrants died in seas around Turkey in their bid to reach Europe. In the first five months of this year, 16 migrants died in the Aegean Sea. The Turkish Coast Guard has also captured 16 human smugglers since January 2019. In April, a suspect accused of being the "regional head" of a human smuggling network in Çanakkale, a popular destination among illegal migrants, was arrested. The suspect identified as M.K. was accused of organizing journeys to Greece for about 1,000 illegal migrants.