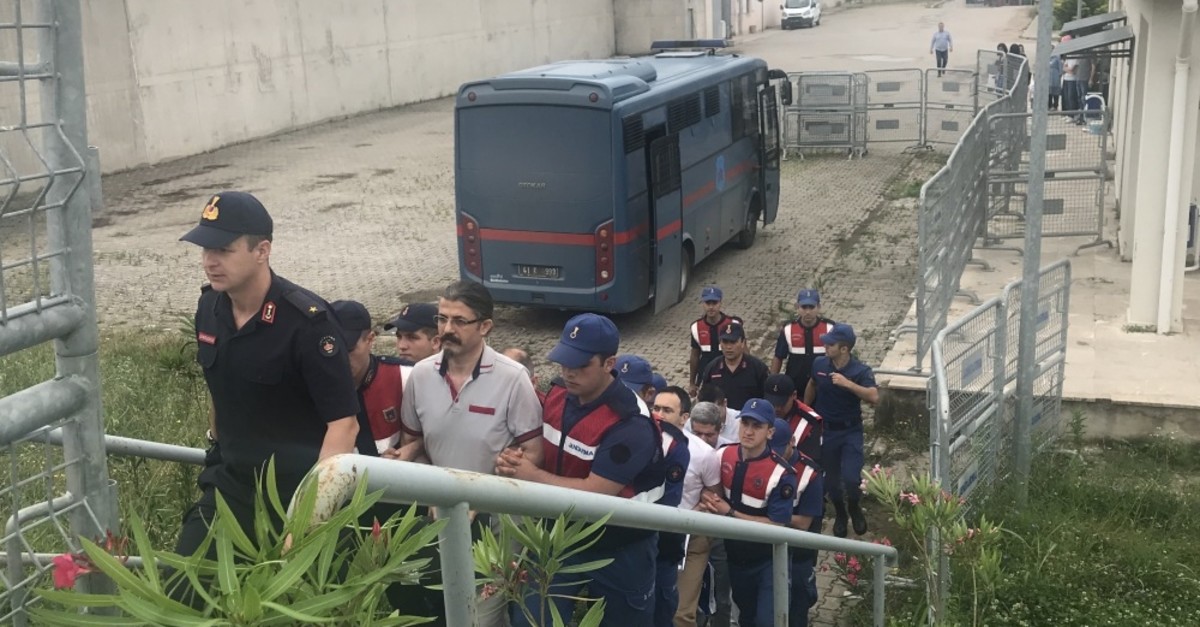 A week of trials concerning the 2016 coup attempt by military infiltrators of the Gülenist Terror Group (FETÖ) ended Friday with a court handing down prison sentences for defendants involved in the attempt.

In the northwestern city of Kocaeli, a former admiral was sentenced to aggravated life imprisonment, while 51 civilian members of the terrorist group got prison terms of up to 10 years in another case regarding the group's network in the capital Ankara. Thirty-five defendants were on trial in Kocaeli where the headquarters of the army's naval forces and a critical maritime air base are located. Defendants, mostly military officers, were accused of joining the coup attempt, which killed 251 people and injured 2,200 others, on July 15, 2016. Only six were incarcerated, while others were released with judicial control earlier or remain at large.

The trial was separated from a larger trial about navy personnel's involvement in the attempt and started last year. It covers the actions of defendants at the naval command, including a putschist takeover of the headquarters and ordering warships to sea in an apparent attempt to subdue any resistance to the coup in port cities and helping putschists escape in case of failure. Fetullah Gülen, the fugitive leader of FETÖ, and Tezcan Kızılelma, the admiral who was commander of the Maritime Air Base in Kocaeli, were among the key defendants in the case.

Kızılelma had already been convicted and sentenced to 15 years in a trial concerning the assassination attempt targeting President Recep Tayyip Erdoğan on the night of the coup attempt that ended with the killing of two police officers by putschists. He was accused of ordering a base commander in the southern city of Antalya to green light refueling for a helicopter carrying would-be assassins of Erdoğan. His name was in a martial law directive of the putschists sent to military bases across Turkey to join the coup attempt.

The court ruled for aggravated life imprisonment for Kızılelma on charges of violation of the constitutional order in reference to the coup attempt. Zabit Kişi and Halil İbrahim Temel, two civilians in the case who were accused of serving as handlers for FETÖ military infiltrators, were sentenced to 13 years and six months in prison in the same case. Kişi was arrested in Kazakhstan two years ago and was sent to Turkey. Three defendants were sentenced to seven years for membership in a terrorist group, while two others were sentenced to six years for the same charges. Six defendants were acquitted, while the judges ruled for a separate trial for 13 fugitive defendants and seven others who were released earlier with judicial control.

Halit Çokan, the lawyer who represented the Turkish Presidency as the plaintiff in the trial, said they respected the ruling, but there were "some instances that they did not agree" and would take some convictions to an appeals court for more severe prison terms for defendants. "In our opinion, the court released some defendants directly involved in the coup attempt. Still, the verdict today was very important for our democracy," he told reporters outside the courthouse Friday.

In the capital Ankara, a court handed down prison terms to 51 defendants who were accused of being a part of the terrorist group's network in the capital's Çubuk district. Prison terms between one year and 10 years were handed down to the defendants. Onur Torgaylı, FETÖ's "leader" for the district, received 10 years and six months in prison, while the court ordered a separate trial for eight fugitive defendants in the case and the seizure of assets belonging to fugitives. Nine defendants were sentenced to one year in prison but were released as they had collaborated with investigators earlier and helped uncover the terrorist group's hidden network. Twenty-two others were acquitted.

The terrorist group is known for its widespread infiltration of the army, law enforcement, judiciary and bureaucracy. It first attempted to overthrow the government in 2013 with its infiltrators in the judiciary and the Turkish National Police. It failed, and the group faced increased scrutiny. When news broke that the military was preparing to launch a mass purge of FETÖ-linked officers in August 2016, the group moved to prevent it with the coup attempt. Strong public resistance ultimately stopped the coup, and most of those involved in the coup attempt were arrested.