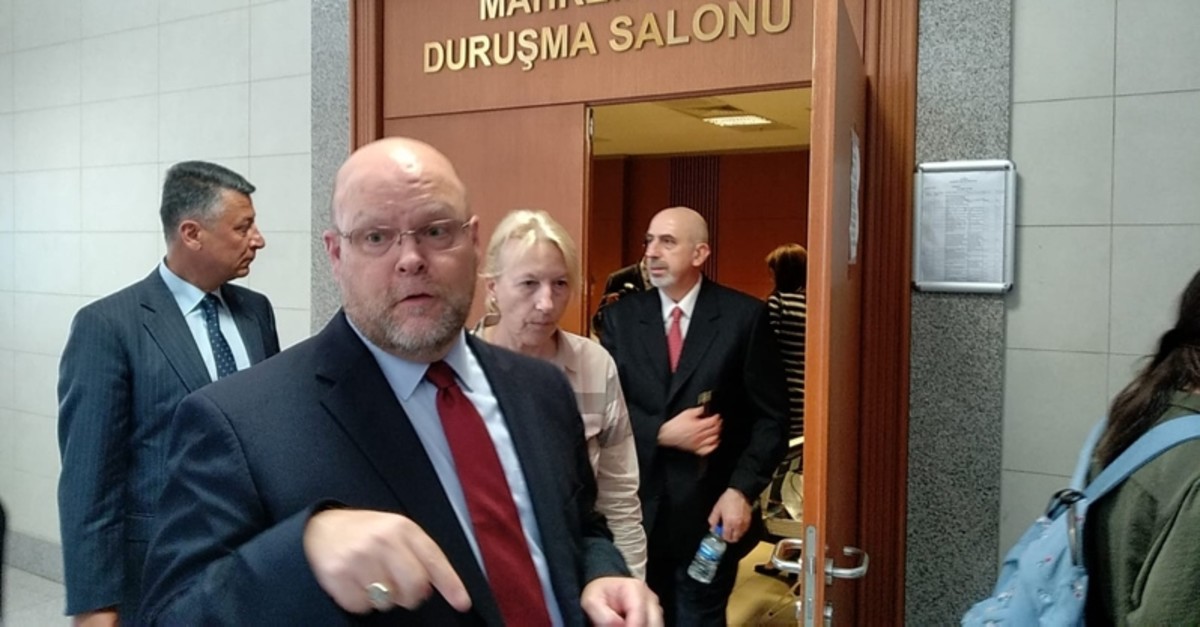 US Charge d'Affaires in Ankara Jeffrey Hovenier (L) speaks to reporters as US Istanbul Consulate Mete Cantu00fcrk, the suspect in trial over alleged links to FETu00d6, leaves the courtroom in Istanbul's u00c7au011flayan Courthouse. (DHA Photo)
by daily sabah Jun 25, 2019 11:45 am

A Turkish court ruled on Tuesday to release U.S. Consulate General employee Nazmi Mete Cantürk from house arrest due to health issues but barred him from leaving the country during his trial.

Cantürk, a security officer at the U.S. Consulate in Istanbul, and his wife and daughter are accused of links to the Gülenist Terror Group (FETÖ), which is responsible for a bloody coup attempt on July 15, 2016. Prosecutors claim the three defendants have connections with former police chiefs and soldiers in FETÖ, as well as former fugitive prosecutor Zekeriya Öz.

The 27th Istanbul Heavy Penal Court also ordered to lift judicial control measures on Cantürk's wife Sevim Cantürk and daughter Kevser Irem Cantürk. Cantürk must check in at the police station once a week during house arrest, the court stipulated.

All three defendants and their lawyers had rejected the charges and demanded that the judicial control provisions be lifted.

US charge d'affaires Jeffrey Hovenier, who attended the hearing, welcomed the decision to release him from house arrest.

"We continue to see no evidence to support the charges brought against him and we reiterate our call for this process as well as other processes involving our unjustly detained staff to be resolved quickly, transparently and fairly," said Hovenier.

Several Turkish employees of U.S. diplomatic mission and U.S. citizens are currently on trial as Turkey accuses the U.S. of harboring FETÖ, which operates a vast network of charter schools and businesses in the country, and its leader Fetullah Gülen, who has lived in self-imposed exile in Pennsylvania since 1999.

Metin Topuz, a worker at the U.S. Consulate in Istanbul, is among them and the prosecutor in yesterday's trial requested the court to summon Topuz as a witness in the case. The court accepted the request and ordered Topuz to be summoned in the next hearing, which is set for October 2.

Topuz, arrested in 2017, was working as a liaison officer/translator for the U.S. Drug Enforcement Agency (DEA) at the consulate. Prosecutors are seeking up to 35 years in jail for Topuz on charges of espionage and links to FETÖ. The indictment accuses Topuz of being in frequent contact with FETÖ-linked police chiefs who were behind FETÖ's first coup attempt in 2013.

Hamza Uluçay, a Turkish translator of the U.S. mission in southern Adana province was convicted of terror-related offenses earlier this year but released from prison.

A Turkish-American former NASA scientist, Serkan Gölge, detained in Turkey for nearly three years on similar terrorism charges, was released in May.

Relations between Ankara and Washington have been strained over several issues, including Turkey's purchase of a Russian missile defense system and U.S. support for PKK terrorist group's Syrian offshoot the People's Protection Units (YPG).

President Recep Erdoğan is due to meet his American counterpart Donald Trump this week on the sidelines of the G20 summit in Osaka, Japan.