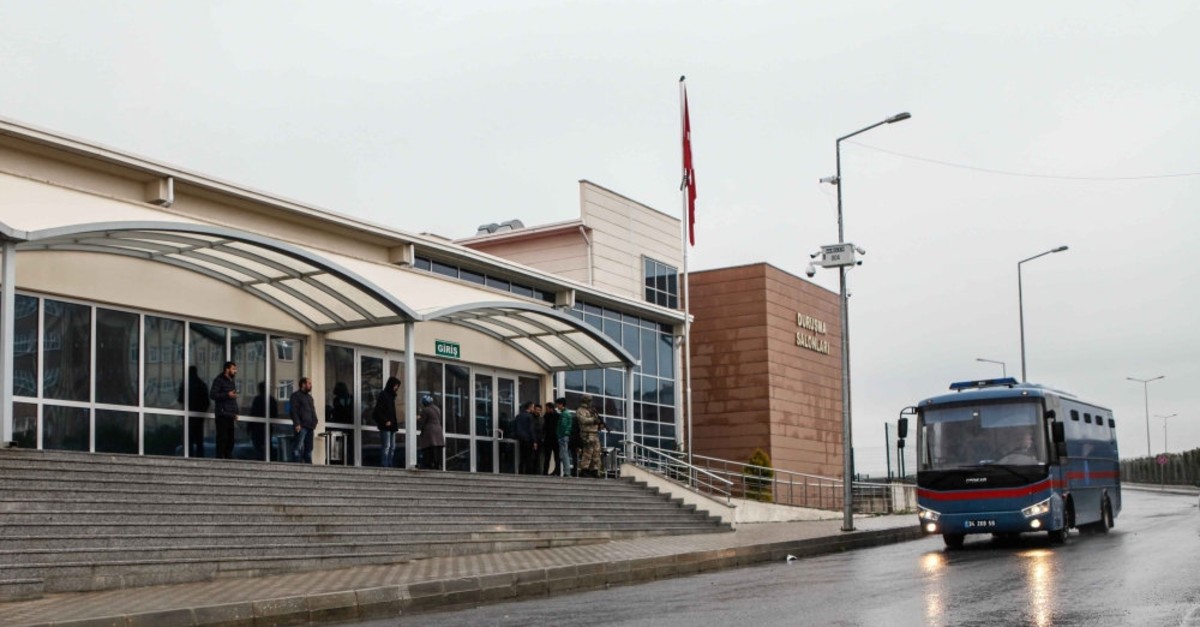 A view of the Silivri courtroom in Istanbul where trials will be held in August.
by Anadolu Agency Jul 23, 2019 12:21 am

A public prosecutor presented his deliberations on a case concerning the failed July 15, 2016 coup that currently has 43 accused suspects, including 28 detainees and Air Force Academy officers among them. The deliberation asks for the Gülenist Terror Group's (FETÖ) Turkish Armed Forces (TSK) imam (a term used to describe the group's handlers for its infiltrators) Kemal Batmaz to be sentenced to life.

Batmaz's fingerprints were found in a book in the house of Adil Öksüz, a key figure from FETÖ in the coup attempt, and he was captured at the Akıncı Air Base in Ankara. Prosecutors are also seeking a sentence of up to 56 years and three months for former regiment commander Staff Col. Hüseyin Ergezen who was in contact with Kemal Batmaz via payphone, as well as a life sentence. Ergezen is accused of "violation of the Constitution," "membership in an armed terrorist organization," "prevention of the right to access public services" and "hijacking of means of transport."

These two cases were asked to be separated from the other coup cases, which are being judged for "violation of the Constitution" and "membership in an armed terrorist organization" and where some accused are looking to serve life sentences while others have gotten up to 15 years in prison.

The public prosecutor asked for life sentences for 41 out of the 43 accused in the case concerning the failed coup by members of FETÖ.

The prosecutor presented his deliberation at the Istanbul 37th High Criminal Court.

The deliberation stated that Ergezen instructed Air Force Academy students to work out at 6:30 am on the day of the coup attempt. It's been noted that Ergezen canceled the night workout set to take place at 5:30 p.m.

The deliberation states that Ergezen, at 6 p.m. on the day of the coup attempt, instructed some of his officers and students to get on multiple busses headed to Istanbul from Yalova as reinforcements; they also were fully equipped.

On July 15, 2016, 251 civilians were killed and more than 2,000 others were injured during the coup attempt by FETÖ terrorists.

'They buried the cameras'

Former Maj. Gen. Fethi Alpay, who was sentenced to 88 life sentences after the coup attempt, informed Sgt. Burhan Torlak and Sgt. Yavuz Baguç to remove the cameras in and around the headquarters and bury them outside the school. In accordance with the evidence and witness statements collected on Ergezen, according to the pseudo-assignment list prepared by the pro-coup soldiers, Ergezen was listed as the "Istanbul TRT executive" and stated that he participated in coordination meetings in Istanbul and Yalova.

The deliberation encapsulates the payphone connections established in 2013 between Batmaz and Ergezen in the house of FETÖ's "TSK imam" Adil Öksüz, who is still on the run. Ergezen's finger prints were also found in Adil Öksüz's house, it also states that Öksüz's phone was used many times.