Biggest trial on FETÖ's coup attempt to wrap up soon 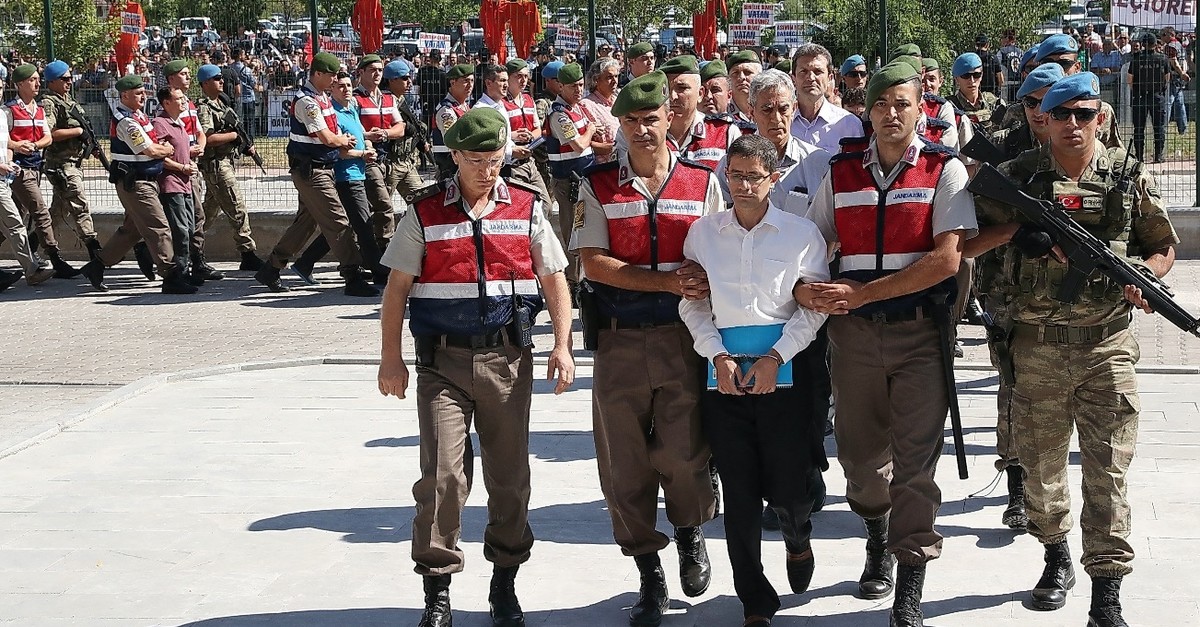 Gendarme troops escort Kemal Batmaz and other defendants to the courtroom in Ankarau2019s Sincan district in a 2017 hearing.
by Daily Sabah Aug 06, 2019 12:05 am

The most comprehensive trial concerning the fateful day of July 15, 2016, will soon conclude as almost half of the 475 defendants completed their final statements against a damning indictment.

The Akıncı trial, which will resume Sept. 3, after the judiciary returns from summer recess, should wrap up in a few months and will be the last big trial concerning the 2016 coup attempt perpetrated by military infiltrators of the Gülenist Terror Group (FETÖ).

Some 471 military officers and four civilians face prison terms ranging from aggravated life imprisonment due to their role in the coup attempt to lesser prison terms regarding membership in a terrorist group. Four civilians accused of serving as FETÖ's handlers for military infiltrators face 79 separate instances of life imprisonment for orchestrating the coup attempt.

FETÖ, in nearly 300 trials on the coup attempt, is accused of carrying out the putsch bid through its infiltrators in the Turkish Armed Forces, from sergeants to generals.

The final hearing was held last week in the Akıncı trial. Hearings are held in a massive prison complex in Ankara's Sincan district, which also houses a spacious courtroom specifically designed to house defendants in coup-related trials. Some 200 defendants have made their final statements against the indictment by prosecutors so far. Prosecutors ask for heftier prison terms for 396 defendants, with life sentences asked for those behind the deadly bombings of several locations in Ankara during the coup attempt.

Akıncı was the name of a major air base in Ankara when the coup attempt that killed 251 people and injured nearly 2,200 others unfolded. It was from this base, which was renamed following the attempt, the plotters allegedly planned and conducted their coup attempt. This was where warplanes and helicopters took off to strike Parliament, an anti-coup crowd near the presidential complex and the headquarters of an elite police unit. It was also at Akıncı where the top military brass, including then Chief of General Staff Gen. Hulusi Akar, were brought after they were kidnapped by putschists. By the early hours of July 16, 2016, few putschists were still holding out against anti-coup forces in the base. Strong public resistance, combined with a swift response by anti-coup soldiers and law enforcement, helped thwart the coup attempt and dozens of defendants currently on trial were detained. Others, like civilian defendants Kemal Batmaz, Hakan Çiçek, Harun Biniş and Nurettin Oruç were either captured inside the base or in vast fields near the base as they tried to flee.

A 713-page indictment by prosecutors say FETÖ started planning a coup attempt after the 2015 elections where the ruling Justice and Development (AK) Party secured another victory. FETÖ repeatedly tried to topple the government on two separate occasions in 2013 though the 2016 attempt was the first time it employed military means. Prosecutors say Batmaz, Çiçek, Oruç and Biniş joined Adil Öksüz, the fugitive defendant in the Akıncı trial, to plan the coup attempt through military infiltrators.

A large number of people, from President Recep Tayyip Erdoğan to army generals targeted by the putschists, lawmakers and families of civilians killed by the coup plotters are among the plaintiffs in the Akıncı trial.

Tens of thousands of people were detained or arrested following the coup attempt, and a barrage of trials were launched against FETÖ, both for its role in the attempt and other crimes.

Some 289 lawsuits were filed against the putschists following the coup attempt with 266 concluded so far. Other trials are expected to conclude by the end of 2019. More than 2,260 defendants were sentenced to life imprisonment in concluded coup attempt trials.