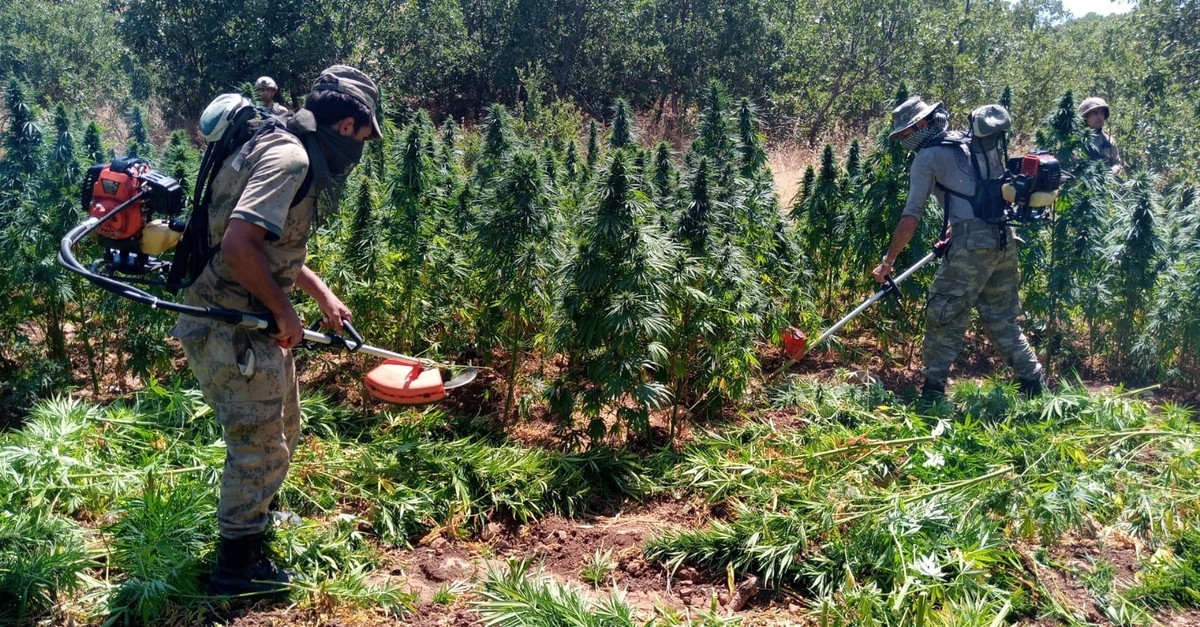 The PKK terrorist group's efforts to secure profits from illegal drugs now are now being challenged thanks to continuous "narco-terrorism" operations in southeastern Turkey.

The governorate of Diyarbakır province announced yesterday that in 381 operations between January and the first week of August, authorities seized more than 15 million cannabis plants along with 9.1 tons of heroin in the province. "The plants could be used to produce 250 tons of drugs," a statement by the governorate said. Some 200 suspects were detained in operations, while 31 among them were taken into custody.

The operations were part of a wider crackdown against the PKK, and troops have destroyed hideouts used by the terrorist group in operations since January.

In recent years, Turkey stepped up efforts to cut off drug supplies to the PKK. The terrorist group is accused of trafficking narcotics to fund its violent campaign. Active in the country since the 1980s, the group targeted civilians, soldiers and police officers for decades, killing thousands of people in three decades. Its attacks are mainly focused in southeastern Turkey, where it recruits militants as well. The Interior Ministry says the terrorist group controls almost the entire drug market in Europe and earns $1.5 billion from drugs yearly.

A report by the Interior Ministry says drugs are the main income for the PKK, whose leaders are believed to be hiding out in the mountainous regions of northern Iraq but still manages to orchestrate attacks inside Turkey. The Interior Ministry report shows that the terrorist group is heavily involved in the drug trade, from the production of narcotics to their delivery, distribution and sales. In July 2013, security forces destroyed around 2 million cannabis plants in Diyarbakır's Lice district in a major counter-narcotics operation. Counter-narcotics operations and tightened security measures have led to a decline in profits from the drug trade. Experts say Lice and the southeastern region are favored for the cultivation of cannabis because its climate is favorable and because the mountainous terrain hinders easy access by security forces. Although no concrete numbers are available, authorities believe about two-thirds of the illegal cannabis cultivated in Turkey is grown around Diyarbakır.