War on narcotics nets thousands of suspects, tons of drugs 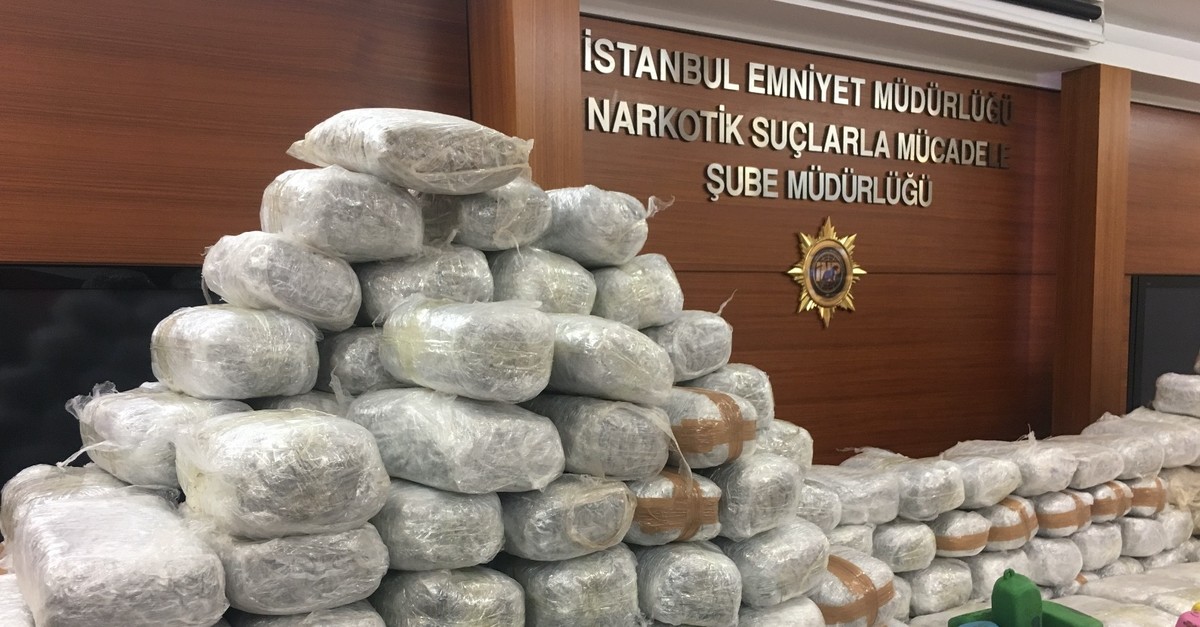 A new police report on counternarcotics efforts revealed that more than 206,000 suspects were detained last year and more than 100 tons of drugs and millions of illegal pills were seized

The new edition of the "Turkey Drug Report" by the counter-narcotics department of the Turkish police shed light on the country's efforts to curb drug smuggling as well as drug use. The report, compiled from data by all government agencies involved in the fight against drugs, points out that 206,314 suspects were detained in more than 144,000 drug-related cases. There is a 21% increase in the number of captured suspects, but the report says there is also an increase in the number of cases. Turkey is trying to shed its image as a transit country and at the same time is fighting against domestic drug use. In 2014, the Turkish government launched "The Rapid Action Plan against Drugs" to counter drug use and smuggling on multiple fronts.

Efforts include outreach to addicts with rehabilitation and awareness campaigns, and operations targeting smugglers and small-time dealers carried out by newly formed "narco teams." These operations especially focus on areas near schools and other places frequented by young people, the most vulnerable targets for drug peddlers.

In last year's operations, 18.5 tons of heroin, 80.7 tons of cannabis and "skunk" (a genetically modified or hybrid strain of cannabis) and 1.5 tons of cocaine were seized. Police also confiscated 566 kilos of methamphetamine and more than 1.2 tons of a cheap synthetic cannabinoid known as "bonzai."

Authorities also seized 8.9 million ecstasy pills and 22.7 million Captagon pills in nationwide counternarcotics operations. The report highlights an increase both in the number of operations and suspects but underlines that it was still difficult to conclude that there is a rise in the number of addicts. It ties the increase to increasing capacity of Turkish police, both in terms of personnel numbers and technology, combined with extra pressure on street dealers.

The Interior Ministry introduced a policy document to combat drugs in 2017 to lay out a road map while it launched a string of new projects. Narco teams are part of the strategy to clamp down on drug-related crimes. Launched in 2014, teams have been an indispensable part of counternarcotic efforts especially in neighborhoods. Last year, they intervened in more than 37,000 drug-related cases and detained 66,535 suspects. Police also routinely conducts "field inspections," a "preventive measure" against drug dealers especially in crime-ridden neighborhoods where police occasionally monitor suspects with random checks and maintain a continuous presence to deter dealers seeking access to those neighborhoods. More than 71,000 police officers were stationed in such areas in 18 provinces and the result was 7,485 detentions last year. Some 1,042 suspects among them were remanded in custody.

The government also mobilized the public in helping fight against drugs with UYUMA (Do Not Sleep), an app allowing users to notify police to drug-related cases. App users can simply share a location online for police response through the app whose name is derived from the abbreviation "Application for Fighting Drugs."

In another project, police tapped into the assistance of people on the street and the security sector. The "Efficient Use of Local Administrations for Fight Against Drugs" project trains municipal police who are originally tasked with inspecting businesses for safety and other violations, as well as street sweepers and private security guards. More than 185,000 people were trained as part of the project last year.

The "narco-point" project is another stage of efforts to raise awareness of drug issues. Police inform families on how to spot drug use and what to do when they encounter drug-related issues through the project. More than 167,000 people were informed in the awareness campaign. Similarly, a truck serving as a mobile information office about the dangers of drugs, tours the country regularly to inform the public. More than 250,000 people were informed as part of the campaign.

Meanwhile, to delve into the causes of drug addiction, the police's counternarcotics department is carrying out the "Narkolog" project which studies those who were detained for drug use. Drug users volunteer for the study where they were interviewed about their drug use, to help authorities collect data about the scale of addiction.

The police report also sheds light on "narco-terrorism" operations carried out since the 1980s against terrorist groups profiting from the drug trade. Security forces carried out 448 operations between 1980 and 2019 against the PKK's drug business and detained 1,442 suspects while seizing more than 63 tons of cannabis, 5.4 tons of heroin and 88.1 million cannabis plants. The terrorist group is accused of trafficking narcotics to fund its violent campaign. Active in the country since the 1980s, the group targeted civilians, soldiers and police officers for decades, killing thousands of people in three decades. Its attacks are mainly focused in southeastern Turkey, where it recruits militants as well. The Interior Ministry says the terrorist group controls almost the entire drug market in Europe and earns $1.5 billion from drugs yearly.

The report says one-fifth of convicts in prisons were imprisoned in drug-related cases and their number slightly increased last year. There were more than 57,000 people jailed for drug cases last year while more than 103,000 others were released with judiciary control after they were detained in drug cases.

As for deaths from drugs, there is a considerable decline compared to 2013. A total 232 deaths were officially recorded from drug use in 2013 and it skyrocketed to 497 in 2014. It gradually but steadily increased in the subsequent years and reached 941 in 2017, before decreasing to 657 last year. The report links the decline to the better coordination of efforts against drug addiction, increasing the capacity of police and more awareness campaigns. Deaths from drugs were mostly men and the eldest among them was 71. The average age of those that died of drug use was 32.6.

Almost half of the deaths were the result of synthetic cannabinoid use. A total of 301 people died of synthetic cannabinoid use last year while this number was 564 in 2017. Bonzai is the most common form of a synthetic cannabinoid in Turkey. It has similar characteristics to marijuana but is more destructive to the metabolism as it consists of synthetic materials. It causes rapid brain damage and its symptoms include schizophrenia-like wild behavior. The drug is also blamed for sudden heart failures. Doctors say that regular bonzai use often leads to kidney and liver failure within two months. Bonzai, which has 200 different types, is better known as phenazepam in the rest of the world and is believed to have first been developed in the Soviet Union during the 1970s. Producers of the illegal drug add pesticide and similar substances to the drug to accelerate its effects. Thus, drug users face the risk of potentially fatal poisoning.

A survey with 42,754 people included in the police report says 3.1% of interviewees tried drugs at least once in their life.