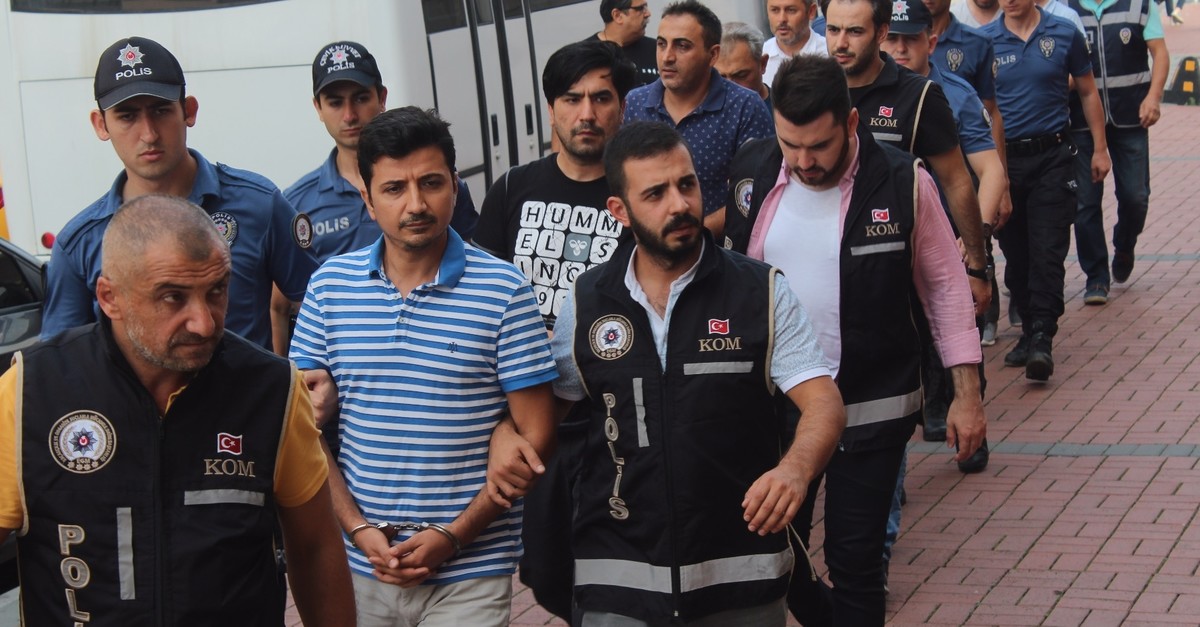 Thirteen suspects captured in operations against FETu00d6 are escorted to the courthouse by counterterrorism police in Kocaeli, Aug. 23, 2019.
by Daily Sabah Aug 24, 2019 12:02 am

Sixty-one suspects, including former soldiers and a number of civilians, were captured Friday in a crackdown against the FETÖ terrorist group

Police across Turkey apprehended 61 suspects linked to the Gülenist Terror Group (FETÖ) on Friday in a new wave of operations against the group behind the July 15, 2016 coup attempt.

The suspects were former soldiers and people who worked at schools associated with the terrorist group. In the capital Ankara, the Chief Prosecutor's Office issued arrest warrants for 52 people who served as staff of private schools run by FETÖ. The schools were shut down in earlier investigations against the terrorist group. Thirty-six suspects were detained when Daily Sabah went to print, while a manhunt was underway for the other suspects.

FETÖ is known for its global network of schools and companies. Since it first tried to topple the government under the guise of an anti-graft probe, FETÖ faced a heightened crackdown and schools linked to the group were shut down one by one.

In the central city of Sivas, authorities issued arrest warrants for three suspects in an investigation into FETÖ's secret military network. A first lieutenant, a specialist sergeant and a military cadet were captured in operations in Istanbul, the western city of İzmir and the eastern city of Erzurum and brought to Sivas. The suspects are accused of organizing FETÖ's infiltration efforts into the Turkish army and helping young followers gain admission to military schools.

Elsewhere, prosecutors in Ankara issued arrest warrants for former staff of the Turkish Air Force. Twenty-one suspects were detained in operations carried out in 17 cities and operations were underway to capture 13 others. All suspects were earlier dismissed from their jobs for suspected links to the terrorist group. They were identified in an investigation into soldiers using payphones to contact "imams," FETÖ's handlers for the group's military infiltrators. Communication via payphones is a common method employed by FETÖ to avoid detection.

Since the 2016 coup attempt, prosecutors found that nearly 14,500 people used pay phones to communicate with the senior members of FETÖ. Around 13,500 of them were arrested in over 800 operations across the country. Some 5,000 of the detainees have been remanded into custody, while nearly 8,500 suspects were released, including those under judicial control.

FETÖ often resorts to this communication method to relay the messages of high-ranking members of the terrorist group to infiltrators. Authorities say the group's handlers contacted infiltrators via calls from pay phones at regular intervals and arranged secret meetings with them.

In the southeastern province of Şırnak, police detained Mehmet Tahir Kocakurt at the Habur border crossing with Iraq. Kocakurt was wanted for charges of leading a circle of businesspeople in western and southern Turkey loyal to FETÖ. He was carrying a fake passport when he was captured and planning to fly to the United States from Iraq. Kocakurt was remanded into custody.

The terrorist group is known for its widespread infiltration of the army, law enforcement, judiciary and bureaucracy. It first attempted to overthrow the government in 2013 with its infiltrators in the judiciary and the Turkish National Police. It failed, and the group faced increased scrutiny. When the news broke that the military was preparing to launch a mass purge of FETÖ-linked officers in August 2016, the group moved to prevent it with the coup attempt that killed 251 people and injured about 2,200 others. Strong public resistance ultimately stopped the coup, and the coup's ringleaders, including generals, were arrested. Since then, tens of thousands of people linked to the group and the coup attempt have been detained or arrested, while trials were launched into the group's wrongdoings.