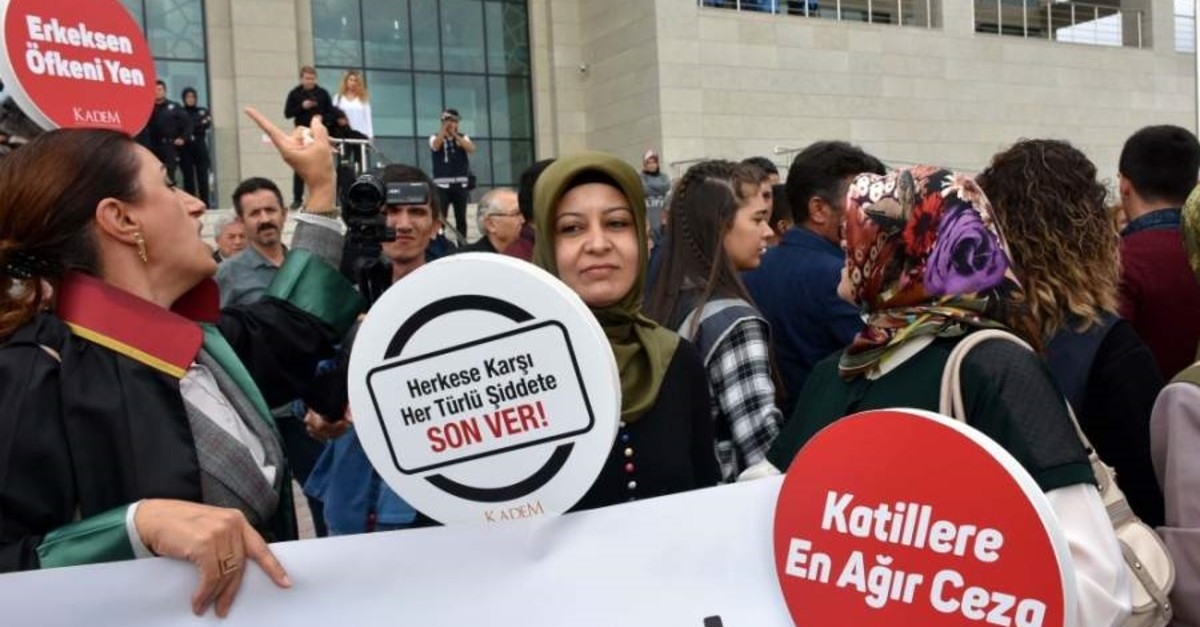 A court handed down life sentence on Monday to Fedai Varan for the murder of his ex-wife Emine Bulut in a high-profile case that turned spotlight to women’s murders once again. The murder in August has raised public outcry after Bulut's final moments were captured on video.
The court in central city of Kırıkkale, where the murder took place, made a rare fast conclusion to a murder case which usually takes months though the verdict is lauded. Prosecutors, meanwhile, said they would appeal to the verdict that came in the second hearing of the trial and would ask for the harsher aggravated lifetime imprisonment for 43-year-old Varan.
Bulut was etched forever in public memory as the desperate voice of women killed by their current and former spouses, a thorny issue for Turkey. She was the woman in an 8-second viral video where a blood-soaked woman screams in a cafe “I don't want to die," while a young girl, her daughter, screams "mother, please don't die." This was her last moment before she joined a growing list of women victim to domestic violence. Her murder has revived a debate on how to tackle the issue in a society where a patriarchal, warped mindset justifies any acts of violence against women. Killers, often ex-husbands, seek reduced sentences, claiming women “stained” their honor by cheating on them, or link the murders to “a brief fit of rage” over trivial matters. The Turkish judiciary is also often criticized for handing down lenient sentences for perpetrators claiming victims “provoked” them or based on a controversial “good manners in court” clause in Turkish laws. Varan’s lawyer sought a similar reduction for his defendant while accusing the police officers of neglecting their duty as Bulut has filed a complaint to police prior to the murder for protection from Varan. The lawyer also claimed the victim “insulted” the defendant, seeking to claim “provocation.”
The court ordered life sentence for defendants on charges of deliberate manslaughter instead of premeditated murder. The defendant did not present any defense, invoking right to remain silent on the grounds that the court did not accept his lawyer’s pleas.
Speaking on behalf of a number of bar associations whose members watched the trial, Birsen Baştopaloğlu told reporters after the trial that the verdict “partially” satisfied them, although she warned that life sentence also meant a possible early release for the defendant. Turgay Özcan, a lawyer for victim’s family, said they would continue their legal battle in the case, claiming it was obvious that it was a premeditated murder.
The prosecutor’s office said in a written statement after the trial that the verdict was against their request for aggravated life imprisonment on charges of premeditated murder with “monstrous feelings,” a crime in Turkish laws referring to particularly violent murders and they would take the case to a higher court for a harsher sentence for Varan.
Domestic violence claimed 932 lives between 2016 and 2018, the latest year with available official data. Turkey is striving to eradicate the disturbing phenomenon by increasing prison terms for perpetrators and awareness campaigns denouncing violence toward women. The Women's Emergency Assistance Notification System (KADES) app developed by the Turkish police is the latest measure to protect women against violence. Since its launch last year, the app has prevented at least 145 women from suffering death or injury at the hands of men prone to violence. KADES, which can be installed on IOS or Android smartphones, enables women to alert the police with just one click. Users first log on to the app by providing a number of details, including their phone numbers. Once logged on, the victim can notify the police by clicking on the "seek help" button, which automatically sends her location to the police.
Domestic violence and the murder of women by husbands, partners and relatives has long been a thorn in Turkey's side where broader media coverage over recent years has made this scar on society even more visible.
In both physical and sexual violence cases, victims tend to not to report the attacks, either fearing for their life or fearing that their next of kin, children, etc. will also face attack. In some cases, experts say women do not file complaints against their husbands after instances of domestic violence, as they are economically dependent on their spouses. Turkey's Family and Social Affairs Ministry has been tackling the problem by providing education courses, raising public awareness and empowering women.
Last Update: Dec 20, 2019 1:10 am
RELATED TOPICS