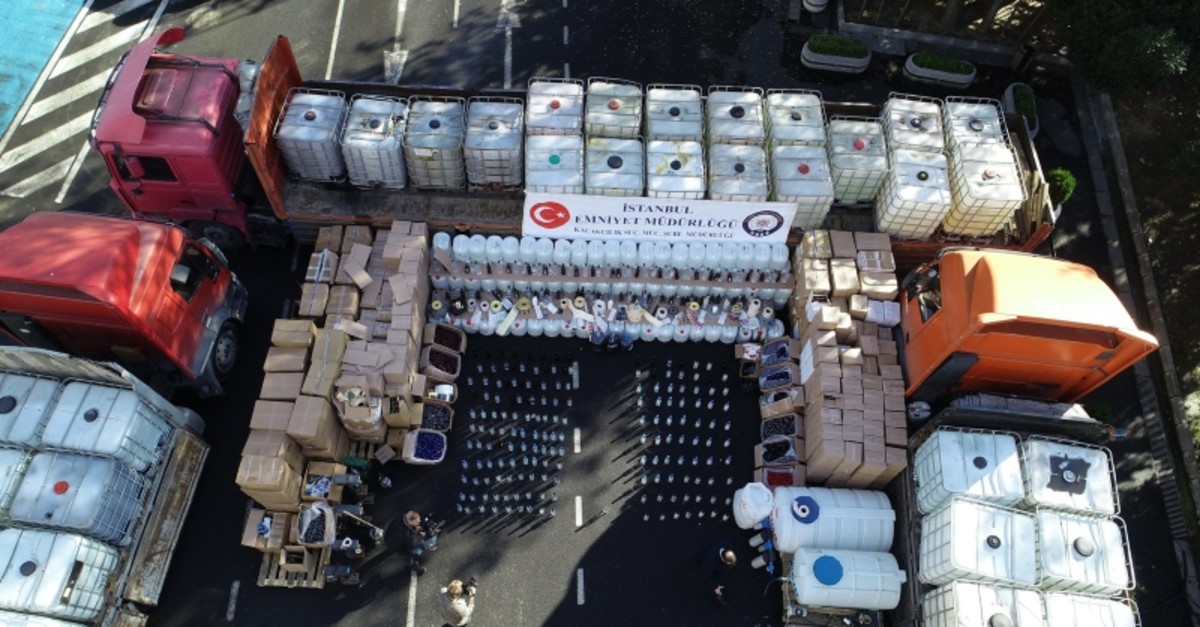 Dozens of plastic cans containing alcohol and thousands of bottles of bootleg liquor seized in raids are seen in the courtyard of Istanbul Police Department headquarters, on Dec. 14, 2019. (DHA Photo)
by Daily Sabah with DHA Dec 14, 2019 2:46 pm

A record haul of 256 tons of bootleg liquor and hundreds of thousands of bottles, bottle caps, labels and fake tax stickers have been seized in simultaneous operations taking place across several Turkish provinces, as police intensify efforts against illegal liquor production ahead of New Year's Eve.

The number of suspects detained in raids targeting the country's largest bootleg liquor network revealed in Turkey since Thursday has reached 80, while 33 others are being sought by police.

As part of an investigation in eight provinces, units from the anti-smuggling directorate of Istanbul Police Department initially inspected 602 venues, including restaurants, bars and liquor stores, launching investigations and issuing fines for 147 businesses. Using information gathered from searches, tip-offs and technical and physical surveillance, police then determined that a large bootleg liquor network consisting of four main groups in charge of alcohol and equipment supply was behind the operation.

The investigation also found that bootleg liquor producers were boiling and distilling methyl alcohol in water tanks to lower costs, while obtaining either original tax stamps en masse from several registered liquor producers or printing fake stamps. The network also used foreign stamps and labels to make certain liquors look as though they had been bought from duty-free stores, while printing Turkish Airlines (THY) labels on some bottles to make them look more convincing for potential buyers.
Based on the investigation findings, anti-smuggling police, backed by special operations squads, Thursday morning raided 147 addresses across the provinces of Adana, Aksaray, Hatay, Istanbul, Izmir, Kırklareli, Şanlıurfa, Niğde and Tekirdağ. Of the 80 suspects detained, four were found to be foreign nationals and deported back to their countries of origin, while five suspects were found to have been arrested for alcohol smuggling in previous raids.

Bootleg liquor made from methyl alcohol caused 27 deaths in Turkey over the course of 2019. Back-to-back poisonings killing 20 people in southern Mersin and Adana provinces also made headlines in July.