Fight against drugs: Turkey steps up seizures in 2019 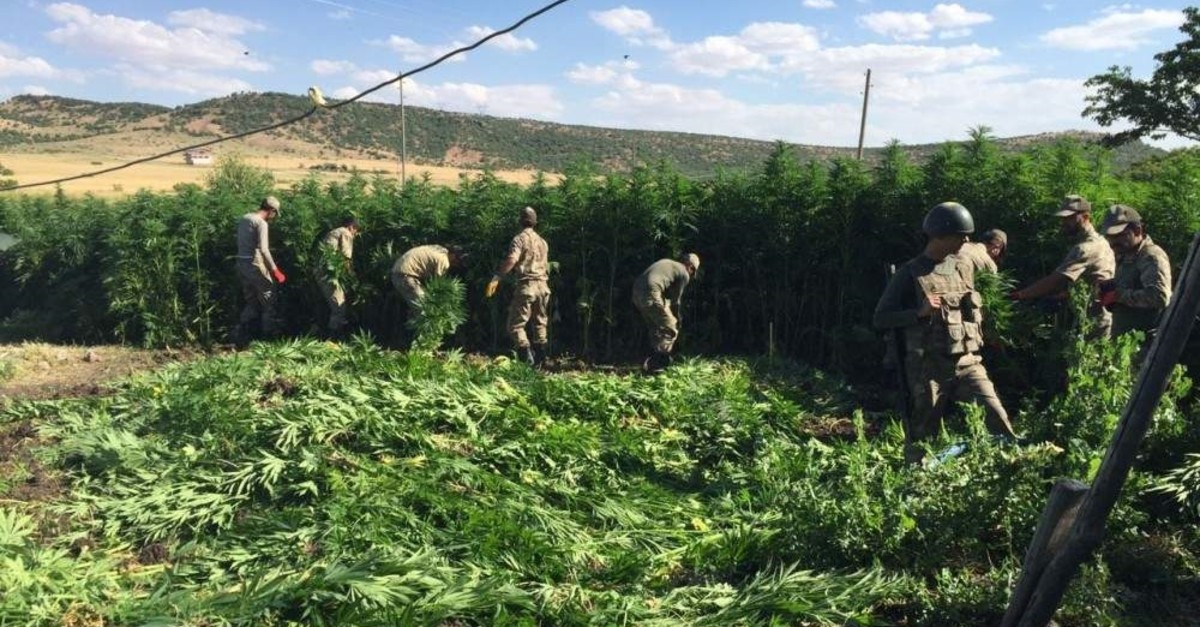 Soldiers collect cannabis plants for demolition after a counter-narcotics operation in this 2017 photo from southeastern province of Diyarbak?r (AA Photo)
by Daily Sabah Dec 30, 2019 4:10 pm

Increasing crackdown on drugs helped Turkey to deal with "narco-terrorism," or profits for terrorist groups from the drug trade, as government ministers revealed Sunday and Monday the latest figures related to drug seizures.

Speaking in a televised interview Sunday night, Interior Minister Süleyman Soylu said security forces seized 43 million cannabis plants in 2019, with a street value of TL 15 billion in "narco-terrorism" operations. He said the drug trade and smuggling provided funds for terrorist groups. "We had a good year when it comes to efficiency in counter-narcotics efforts. Turkey has always sought to include the terrorist group PKK in drug trade reports prepared by the European Union. For the first time in 2019, European Union reports clearly expressed that the PKK was behind drug smuggling and leading those drug smuggling networks. This is because the terrorist group's activities also hit European Union countries," he said.

Soylu said drug smugglers linked to the terrorist groups pursued a scheme to transfer chemical, synthetic drugs from Europe to Gulf countries as well as bringing drugs from the eastern countries to Europe and Turkey, such as opium and heroin.

The PKK earns $1.5 billion from drug trafficking annually, according to the Turkish National Drug Report for 2018.

The PKK terrorist group controls about 80% of the drug trade in Europe, earning around $1.5 billion per year, according to Minister Süleyman Soylu.

A Turkish police report released on Sept. 26 said that the PKK is active in all phases of drug-trafficking, including production, delivery, distribution and sales. The terror group reportedly produces heroin in laboratories in its camps in northern Iraq and sells it to Europe. In its production process, the PKK terrorist organization forces civilians to produce cannabis roots in the eastern and southeastern provinces of Turkey and uses that money to fund terror activities.

The minister also spoke about drug-related deaths and said 500 people died between 2015 and 2016 but rose to 940 in 2017 before it decreased to 657 in 2018. He said they further managed to decrease it 40% this year so far. "We pursue a serious struggle, especially against narco-terrorism," he said.

Minister of Commerce Ruhsar Pekcan, meanwhile, disclosed the number of drugs the customs officers seized in 2019 at a press conference in the capital Ankara Monday. She said officers captured 8.7 tons of drugs at the customs gates by the end of 2019. She linked the high amount of seizure to their increased investment in technology for better detection of drugs, saying they invested TL 410 million to new technologies in the last five years.

Turkey is trying to shed its image as a transit country and at the same time is fighting against domestic drug use. In 2014, the Turkish government launched "The Rapid Action Plan against Drugs" to counter drug use and smuggling on multiple fronts. Efforts include outreach to addicts with rehabilitation and awareness campaigns, and operations targeting smugglers and small-time dealers carried out by newly formed "narco teams." These operations especially focus on areas near schools and other places frequented by young people, the most vulnerable targets for drug peddlers.

In last year's operations, 18.5 tons of heroin, 80.7 tons of cannabis and "skunk" (a genetically modified or hybrid strain of cannabis) and 1.5 tons of cocaine were seized. Police also confiscated 566 kilos of methamphetamine and more than 1.2 tons of a cheap synthetic cannabinoid known as "bonzai." Authorities also seized 8.9 million ecstasy pills and 22.7 million Captagon pills in nationwide counternarcotics operations.