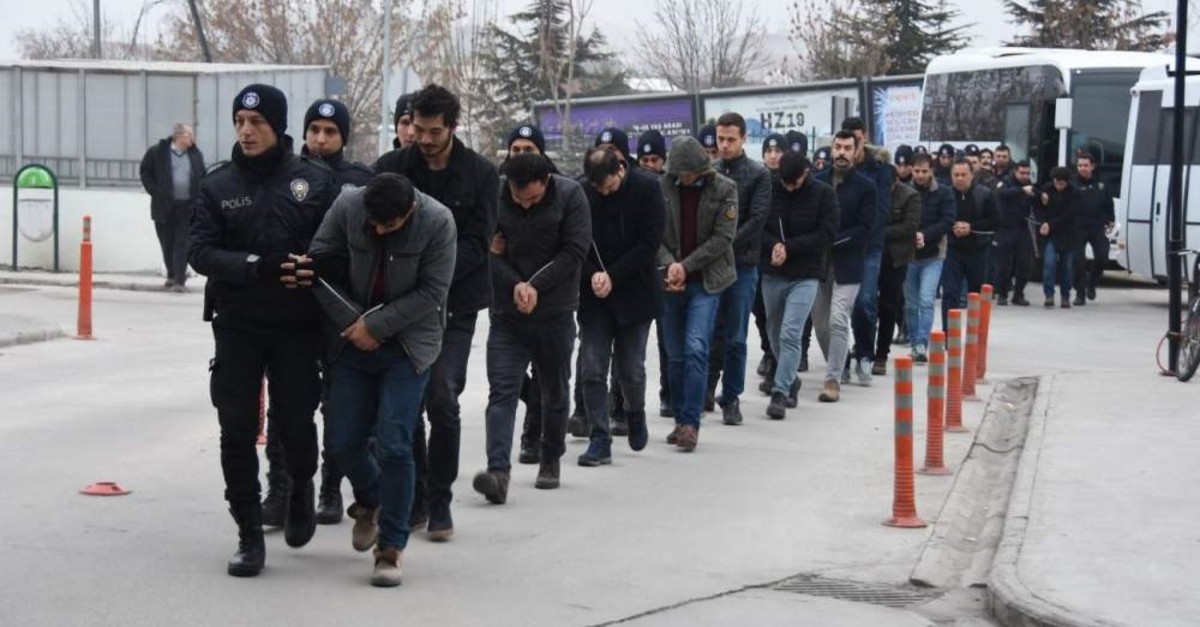 Most of the FETu00d6 suspects were detained for allegedly being involved with fraud in police promotion exams. (DHA Photo)
by Daily Sabah Feb 18, 2020 3:17 pm

Prosecutors across the country issued arrest warrants Tuesday for 875 people with suspected links to the Gülenist Terror Group (FETÖ), security sources said, in what appeared to be the largest operation in recent years into the shady network's infiltration of various institutions.

The largest number of arrest warrants was issued by Ankara Chief Public Prosecutor's Office in a wider probe into FETÖ's infiltration of Turkey's police force. Prosecutors in the capital ordered the arrest of 467 suspects in connection to fraud committed during a deputy police chief entry exam in 2009.

Sought in 67 provinces in simultaneous operations, the suspects are accused of accessing the answers to the exam and distributing them among FETÖ members for mass cheating. The exam allows policemen to be promoted to the rank of deputy inspector, the first step for promotion in a law enforcement career for many.

Prosecutors in 11 other provinces also issued additional arrest warrants for 136 suspects in similar probes over FETÖ's fraud in police exams.

The terrorist group, known for its widespread infiltration of law enforcement, bureaucracy, military and judiciary, moved to seize power three times – twice in 2013 and with a coup attempt in 2016.

Earlier investigations have revealed that between 2009 and 2014, the year it was designated as a national security threat, FETÖ stole questions and answers to exams for academic and public sector promotions as well as those for rank promotion in law enforcement, the judiciary and bureaucracy. The group then supplied the answers to its members, effectively running an infiltration scheme dating back to the 19080s to further its clout.

Several members of the terrorist group have already been convicted of mass cheating on a nationwide exam for civil servants.

In separate probes, prosecutors in Ankara also issued arrest warrants for 134 additional FETÖ suspects in the Turkish Land Forces and the Justice Ministry.

According to the Anadolu Agency sources, 71 of the suspects were sought for allegedly being sleeper FETÖ agents in the Justice Ministry. The sources added that 50 of the suspects had already been detained, including 33 active personnel in the ministry.

The other 44 suspects were wanted as part of an operation investigating the terror group's infiltration of the Turkish Land Forces Command.

In a similar investigation into FETÖ's infiltration of the Turkish military, prosecutors in İzmir issued 157 arrest warrants as well. According to İzmir Chief Public Prosecutor's Office, 108 of 157 suspected infiltrators in the Turkish Armed Forces (TSK) were captured by authorities.

FETÖ posed as a religious group for years under the leadership of Gülen before it disclosed its true intention of toppling the government and creating chaos in the country in 2013 with two plots targeting people close to the government. Turkey managed to stave off these attempts and launched operations against the group, which was designated as a national security threat.

In 2016, the terrorist group tried to seize power again, this time by staging a coup attempt with the aid of its infiltrators in the TSK. This attempt was quelled too, and the group faced heightened scrutiny. Police have launched countless operations against the group since the 2016 coup attempt that killed 251 people and injured nearly 2,200 others. Hundreds of military infiltrators were discovered and arrested in investigations, while tens of thousands were arrested for links to the group.